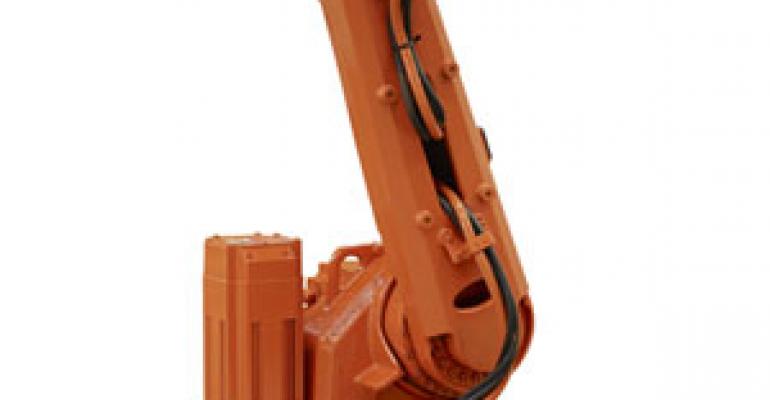 ABB Robotics' latest family of medium capacity, multipurpose robots features an optimized compact design, an ultra-wide working range and a payload capacity up to 20 kg. The IRB-2600 also offers what ABB claims is the best accuracy and speed in its class, improving productivity through increased output, faster cycle times and lower scrap rates.

"The release of the IRB 2600 is a continuation of our philosophy of keeping footprint sizes smaller, arm mechanisms scalable and control architecture powerful and flexible," says Nick Hunt, product support manager for ABB Robotics, North America. "This generation of robot arms replaces a similar arm payload range, but adds flexibility and decreases physical size, while dramatically increasing the performance throughout the entire work envelope."

Hunt says the key to increasing the IRB 2600 work envelope is in the unlinked revolute design compared to its four-bar linkage predecessor. For example, the IRB-2400 series robot it is replacing uses a more constrained kinematic design. It can only move up and back as far as the parallel linkages allow, so the robot can't bend over backwards.

"When we removed the constraint due to the four-bar link, we also removed the motion constraint thereby increasing the useable work envelope," says Hunt. "It virtually eliminates being limited to approximately plus or minus 180 degrees for joint 1 or base movements."

Along with the design changes to the robot, ABB also increased the acceleration and speed of the joints, so the new IRB-2600 robots are not only quicker but also faster. The keys are both the high-speed motors and a lighter arm weight.

"Throughput is one of our primary design considerations, since advancing product through the process in the shortest possible time is the production manager's chief goal," says Hunt. "When we increased the acceleration for both joint and linear moves, increased throughput was the result."

The IRB 2600 is the second introduction of ABB's fourth-generation of midrange industrial robots, a portfolio redesign that began with the 2009 introduction of the IRB 4600 family of robots in the 20 to 60 kg payload range. At weights of 284 and 435 kg respectively for the heaviest models, the IRB 2600 and IRB 4600 are among the lightest robots available in their payload ranges.

The IRB 2600 offers numerous system design and performance advantages including flexible mounting options that enable optimized cell designs. The new robots can be floor, wall, invert or shelf-mounted which helps reduce floor space requirements and increases access to the equipment being served. Wall-mounting is a new possibility for a robot of this size.

A key feature of the IRB 2600 is its compact and lightweight design, featuring a total arm weight of less than 300 kg and occupying less floor space than any other robot in its class. Improved speeds and improved cycle times can improve production cycle times by up to 25 percent. High joint speeds and quick acceleration are achieved by combining lightweight mechanical linkages with patented QuickMoveTM motion control technology.

The IRB 2600 family contains three versions: two short arm variants (1.65m) for 12 or 20 kg payloads, and a long arm variant (1.85m) with a 12 kg payload. With the wrist vertical, up to a 27 kg payload is achievable for pick and place packaging applications.

"This is the second year in a row that ABB has released a major addition to its product portfolio that shares the same proven design principles," says Hunt. "That is a flexible control and software architecture for lower cost interface solutions, small mechanical footprint, high joint accelerations and lower power consumption per unit of payload mass."
0 comments
Hide comments
Related
You Might Like