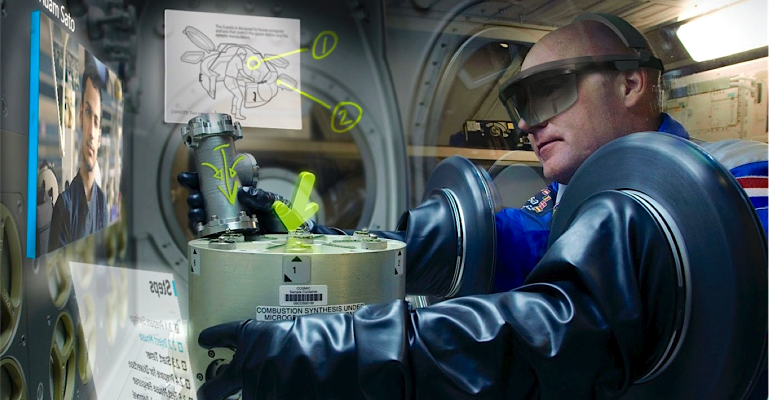 Start Slideshow ›
Sidekick is NASA's hands-free, wearable remote assistance system that enables high-definition 3-D holograms mixed with real-time views, enabling new ways to communicate and work. Sidekick improves efficiency for crew tasks such as science experiments, maintenance, and operations on the ISS.
It isn’t quite a Star Trek holodeck, but it is a step in that direction for ISS astronauts.

While we Earth-bound humans might have to rely on virtual reality or augmented reality to experience simulated life in orbit, astronauts aboard the International Space Station are employing AR and VR to do their zero-g jobs more effectively.

One of their key tools is the Microsoft HoloLens. Microsoft describes this as a self-contained holographic computer running Windows 10 with no wired connections to any other device.

This #saturdaymorning checked out the @Microsoft #HoloLens aboard @Space_Station! Wow! #YearInSpace pic.twitter.com/OZlWmzWjsY

The HoloLens is built on a Qualcomm Snapdragon 850 Compute Platform with Microsoft's own second-generation custom-built holographic processing unit with 4 GB of RAM and 64 GB of storage. It has wireless WiFi and Bluetooth connections and a USB-C plug.

It has a 2K holographic display, and the wearer is tracked with four visible light head position tracking cameras and two infrared eye position cameras. Its battery is good for two or three hours of use, and the device fits over a pair of regular glasses.

The company cites the manufacturing, architecture, construction, automotive, and healthcare industries as its primary focus for HoloLens applications, but astronauts are also using it aboard the station for a variety of tasks and experiments.

NASA has identified nine different ways that astronauts use AR/VR in their work, and that doesn’t even include the AR Space Invaders game depicted in this video.

For the others, click through our slideshow to learn about NASA’s various experiments using this technology.