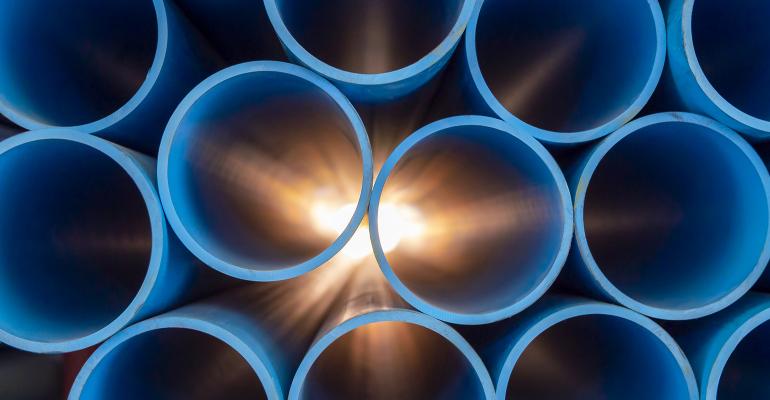 Engineers, contractors, and municipal officials tell survey they will specify PVC pipe for nearly 65% of new and replacement pipe projects.

Aging infrastructure for water pipes in the United States has long been a problem, as we saw a few years ago with the lead pipe fiasco in Flint, MI. It’s not just a pipe problem — these aging pipes are a health problem, as well. Thankfully, plastic is the answer.

The Vinyl Institute (VI), the Washington, DC–based trade association representing manufacturers of vinyl, vinyl chloride monomer (VCM), additives, and modifiers, reports that PVC piping is a preferred material for water infrastructure, based on a recent nationwide survey of engineers, contractors, and municipal employees involved in water projects. “We’re extremely pleased to hear that PVC is a material of choice in many piping applications,” said Ned Monroe, VI President and CEO. “PVC pipe offers unsurpassed reliability and durability, and it plays a critical role in clean water delivery. We’re glad to see that those who specify piping materials are recognizing the benefits of PVC.”

Conducted by marketing research company Accountability Information Management Inc. (AIM), the survey polled 239 individuals across the United States this spring. The objective of the survey was to learn more about the market’s satisfaction with PVC pipe and better understand specification involvement by audience on pipe material in water infrastructure projects. The survey asked questions about various piping materials, including PVC, cast iron, asbestos cement, concrete steel cylinder, galvanized steel, ductile iron, and other plastics in their use of potable water, waste water, agricultural, and drain waste, or vent, applications.

Respondents shared that the majority of their projects over the next five years would be installing new pipelines. Of all water applications, respondents anticipate that they will specify PVC pipe for nearly 65% of both new and replacement pipe projects, on average, said the VI.

“In my 45 years in consulting, I have come around from clay, cast iron, and copper to specifying PVC for most projects,” said one survey respondent. “If the correct pipe is specified in terms of strength and proper joints, and installed correctly, PVC is the better alternative.”

As far as key benefits, 84.1% of respondents cited ease of installation; 70.1% cited ease of maintenance/repair, and 67.3% of respondents prefer PVC’s durability and long-term performance for water projects. Obviously, PVC’s low susceptibility to corrosion is also a major benefit for 53.3%, and this benefit ranked at the top of the chart (8.8) in satisfaction with PVC pipe in water applications, with 1 being not at all satisfied and 10 being completely satisfied.

The lowest satisfaction ratings were 6.6 for the percent of recycled content in PVC pipes, and disposal/recyclability, which rated a 6.5.

The survey was sent to more than 100,000 individuals identified from industry proprietary lists, and was composed of 13% contractors, 43% municipal workers, and 44% engineers from all areas of the United States.

With the new infrastructure bill having passed, perhaps some of the country’s aging lead and steel water pipe systems will be replaced with PVC. Confidence in PVC piping, according to the survey, was 95%.