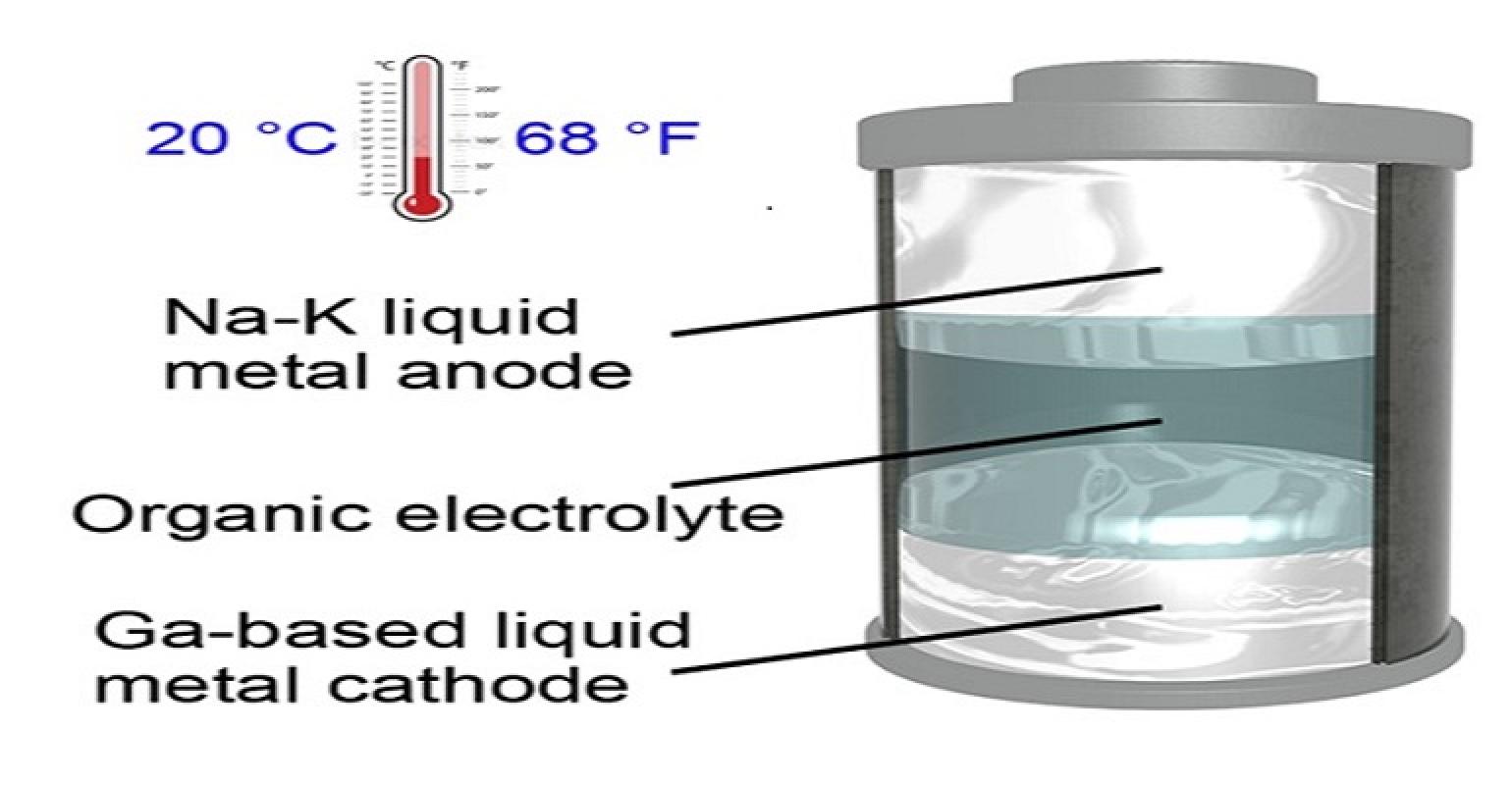 A graphic shows the design of a room-temperature, all-liquid battery that researchers at The University of Texas Austin developed for a range of uses, including the storage of solar energy as part of the electricity grid, and power for next-generation wearables and smartphones.
Battery developed at UT Austin combines best qualities of solid- and liquid-state batteries.

Researchers have developed a versatile, all-liquid battery they think can lift the barrier to entry for sustainable use of solar energy as part of the electricity grid, as well as power next-generation wearables and smartphones.

A team at The University of Texas at Austin have created what they call a “room-temperature all-liquid-metal battery,” which they said combines the best qualities of both solid-electrolyte batteries such as lithium-ion and liquid-electrolyte batteries such as flow batteries. The latter already has been considered the best option for storing renewable energy for use in the electricity grid.

“This battery can provide all the benefits of both solid- and liquid-state—including more energy, increased stability and flexibility—without the respective drawbacks, while also saving energy,” said Yu Ding, a postdoctoral researcher in UT’s Walker Department of Mechanical Engineering, in a press statement.

So far, solid-state and liquid-state batteries have served their respective markets well as energy-storage devices, each with their own advantages and challenges. While batteries such as lithium-ion feature significant storage capacity—making them the de facto standard for mobile devices—they have problems with degradation and lose their efficiency over time.

Related: How has COVID-19 Impacted Renewables and the Grid?

While liquid-state batteries tend to be more efficient and decay less rapidly, they either can’t meet high energy demands or require significant resources to constantly heat the electrodes to keep them molten.

The battery developed by the UT team features a sodium-potassium alloy as the anode and a gallium-based alloy as the cathode. This chemical combination allows it to provide solutions to some of these key issues with each of the two predominant battery designs most commonly used today.

Because it can remain liquefied at a temperature of 20 degrees Celsius (68 degrees Fahrenheit), it solves the problem of needing constant heat, researchers said. Indeed, this is the lowest operating temperature ever recorded for a liquid-metal battery, they said. It also can hold even more power than current lithium-ion battery designs, as well as deliver energy several times faster.

Another benefit to the battery is that can be scaled up or down easily because of its liquid components, they said. This allows it to come in a range of form factors, depending on the amount of power needed, said Associate Professor Guihua Yu, who led the research group working on the project.

“Given the high energy and power density demonstrated, this innovative cell could be potentially implemented for both smart grid and wearable electronics,” he said in a press statement.

There are some drawbacks to the design, which researchers developed for more than three years. While many of the materials used are abundant and easily sourced, gallium is an expensive material and will not be cost-effective if the battery is to be mass-produced. Researchers currently are trying to solve the challenge of finding comparable material in terms of performance that is cheaper.

The team also plans to improve the battery’s electrolytes to increase the battery’s power so performance can be on par with high-temperature, liquid-metal batteries, Ding added.

Organic Proton Battery can be Charged in Seconds
May 13, 2020