The Industrial Internet Will Rule, Even If There’s Still Resistance

The Internet happened.” Those three words spoken yesterday by Marc Ostertag, North America president of B&R Automation at Pacific Design & Manufacturing, now taking place in Anaheim through Feb. 11, continues to bring ever-lasting changes to our ways of life and will undoubtedly transform manufacturing.

Those three words spoken yesterday by Marc Ostertag, North America president of B&R Automation at Pacific Design & Manufacturing, now taking place in Anaheim through Feb. 11, continues to bring ever-lasting changes to our ways of life and will undoubtedly transform manufacturing.

In an education session dubbed “First Things First: 101 Understanding of Industry 4.0,” Ostertag said networked manufacturing, or Industrial Internet, is here to stay and will continue to grow because of a “perfect storm” of technology advances and economies of scale in sensors and electronic and communications devices. Networked manufacturing, through increased connectivity and data intelligence, is going to bring opportunities to increase productivity and decrease energy consumption by enabling manufacturers to move resources around and optimizing systems.

In front of a capacity crowd of about 60 industry professionals, Ostertag said the convergence of the Internet and manufacturing is now really possible because of low-cost processing and Big Data storage. “We’re at the point where it can be automatically handled,” he said of data-handling. 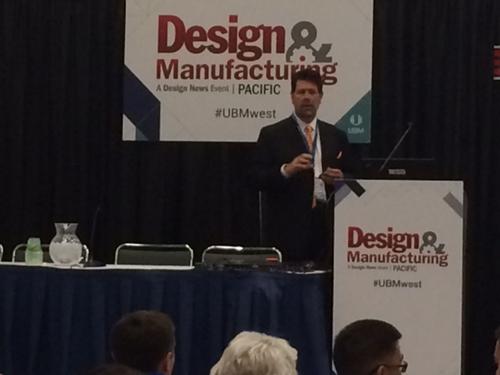 However, Ostertag said there remains barriers to adoption of Industry 4.0, the biggest of which is the lack of standards, followed by security concerns. He added that manufacturers remain skeptical of Industry 4.0 due to the uncertainty around return on investment. “Will I get my money back?” Ostertag reported as manufacturers’ third-biggest concern.

One manufacturer in the audience stood up and reported that his company spent $1 million on networking its operations but has gotten little out of it. Ostertag’s session was intended to not only tell the room of professionals that change is inevitable but to reassure them, with him telling that manufacturer that at least now his company has the infrastructure in place to continue experimenting to achieve usable data.

Although the type of usable data will differ from manufacturer to manufacturer, determining that will be a big first step. “What data do you collect and what do you do with it?” Ostertag said to the audience. “This is a big thing.”

Baby steps seemed to be the theme and most prudent strategy to evolve into the Industry 4.0 era. Ostertag said that automation machinery designers and OEMs are working together in the Industrial Internet Consortium on breaking down the barriers to adoption. Machinery vendors are also developing ways to retrofit legacy equipment with modern communications -- a reality for many manufacturers.

It starts with retrofitting older machinery with smart sensors, then controllers, then primary machinery, and then other plant assets for connectivity (producing and receiving data), data storage, and embedded intelligence. The next step is to implement communications networks for data exchange and embed security. This is followed by data storage in the cloud and ultimately by analytics.

Ostertag admitted that the Industrial Internet will be a generational change, taking time to develop and evolve. He acknowledged an audience member who asked him, “Isn’t this basically manufacturing’s contract to future generations?” But he summarized that with continuing advances in technology and data resolution and visualization, “the future is bright.”