An ultra-black coating that absorbs virtually all incident light around it makes surface features disappear so it looks like a black hole. That also boosts performance of the Kent Ridge 1 satellite's star trackers and Earth observation instruments.

An ultra-black coating that absorbs virtually all incident light around it makes surface features disappear so it looks like a black hole. That also helps it boost performance of the Kent Ridge 1 satellite's star trackers and Earth observation instruments.

Kent Ridge 1 is a low-earth orbit microsatellite developed by Germany's Berlin Space Technology (BST) working with the National University of Singapore. It carries two hyper-spectral imaging systems and a high-resolution video camera for Earth observation. Its positioning control system is based on star trackers, which use a map of the stars to provide an accurate position reference. In previous microsatellite designs, BST applied a super-black paint on baffles inside the optical positioning system to reduce internal reflections that could interfere with the star trackers' accuracy. 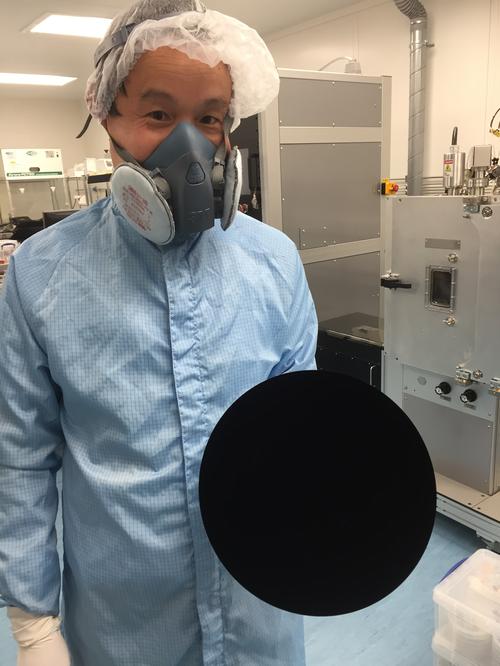 Example of a three-dimensional bowl-shaped object spray-coated with Vantablack S-VIS, which absorbs 99.8% of the light striking its surface. The original Vantablack absorbs 99.965%, making it the world's darkest human-made substance. That version was originally designed for satellite-borne blackbody calibration systems, and is applied using vacuum deposition.
(Source: Surrey NanoSystems)

The ultra-black coating is the new S-VIS version of UK-based Surrey NanoSystems' Vantablack, which absorbs 99.8% of the light striking its surface, Ben Jensen, chief technology officer of Surrey NanoSystems, told Design News. As you can see in the photo above, it's a bit like looking at a black hole, if that were possible: surface details disappear and three-dimensional objects look two-dimensional. The original Vantablack is slightly darker, absorbing 99.965%, making it the world's darkest human-made substance. That version was originally designed for satellite-borne blackbody calibration systems.

Based on a carbon nanotube structure, these coatings decrease the amount of reflected light by an order of magnitude greater than conventional coatings, extending the star trackers' angular range in the presence of bright light sources like the sun and moon. This not only improves performance of the satellite's Earth observation instruments, but also reduces the need for added position control by way of gyroscopes, which over time can introduce drift errors. 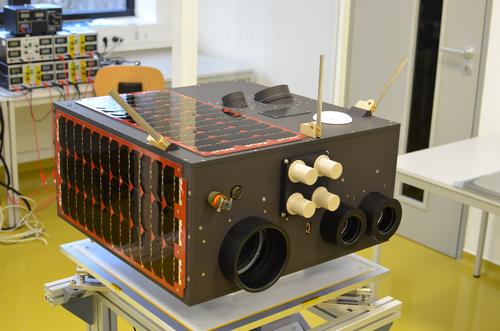 Berlin Space Technologies' Kent Ridge 1 satellite during system building and testing. Vantablack is used to improve the performance of the star tracker optical system. This is visible on the satellite's top surface: the two cylinders pointing up are the star trackers. The Vantablack S-VIS coating is applied inside the optical paths of these objects.
(Source: Berlin Space Technologies)

Unlike other black absorbers, the S-VIS version of Vantablack works across a broad range of wavelengths and viewing angles, from ultraviolet to near infrared, a critical requirement for optical instruments. It's applied using a process similar to spray painting, which made it easy to coat the star trackers' complex 3D baffle shapes, including their thin aluminum sections and sharp edges.

This coating can be applied to most stable surfaces, including many types of composites and engineering-grade polymers, as long as they can withstand temperatures up to 100C. The proprietary application process can be scaled, and is suitable for high-volume production on a range of substrate sizes. S-VIS Vantablack resists extreme shock and vibration to MIL-810G, thermal shock and cycling from -196C to 300C, and is super-hydrophobic. It can be used for coating internal components, such as MEMS or MEMS-type optical sensors, apertures, baffles, and cold shields.