When is Simulation not a Game? If you Want to Win the Race 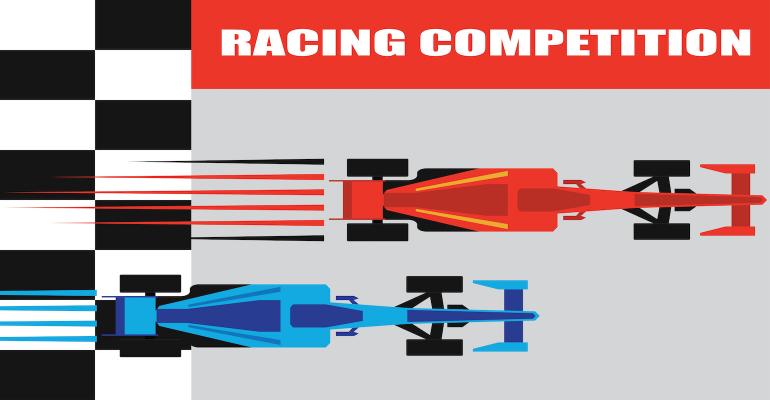 What are the challenges in operating virtual vehicles in a race simulation? John Zinn knows.

Racing on a professional speedway takes years of practice, experience, and talent. How can all this expertise be imbued in the artificial intelligence (AI) software that controls an autonomous racecar? One way is to use accuracy multiphysics simulation, which allows race to explore myriad potential scenarios the cars will encounter on race day and increase their odds of winning.

To learn more about challenges in operating virtual vehicles in a race simulation, Design News caught up with John Zinn, Director of Global Autonomous Solutions at Ansys. What follows is a portion of that conversation.

Design News: Creating an autonomous program to run the virtual vehicles in a race simulation must have been tricky. It seems like a simulation within a simulation. Is that correct?

John Zinn: Our simulation race software uses our driving simulator powered by SCANeR.  Leading up to this event, Ansys developed virtual models of the Indianapolis Motor Speedway and the Dallara AV-21 autonomous racecar. They donated simulation software to all the teams to build and test their technology.  Partnering with Microsoft, the simulation race runs on Microsoft donated Azure cloud services using one master machine that hosts the simulation and is connected to independent machines, which each host an independent race team software controller.  Our software supports various controller implementations using this architecture, including those for embedded systems and those built on ROS or using custom C++ code.  Ansys has also partnered with RTI to synchronize all of the machines using RTI’s Connext DDS service.

We also developed enhancements to the driving simulator software to capture unique effects for motorsports racing.  For example, using the simulator's customization features, we added a tire wear model that accounted for reducing tire friction over time and implemented a drafting model that simultaneously reduces drag and downforce for pursuing race cars.

Design News: “The team submitted their controllers …” What does that mean? Is it a physical controller, or AI, or something else?

John Zinn: In the Indy Autonomous Challenge, university teams are designing autonomous vehicle (AV) software algorithms specifically for this high-speed racing application. The software controller was developed by the teams in the same controller that would run on a physical racecar. It receives sensor inputs for camera, radar, lidar, and GPS produced by the simulation environment. The team’s artificial intelligence algorithms process this data to perform the AV functions needed to operate their autonomous racecars.

Each team must design a localization module to determine their position on the track, often beginning with GPS data coupled to an inertial measurement unit. On top of this, they must develop perception algorithms to recognize and position the other racecars on the track using a combination of camera, lidar, and radar data. Then, prediction algorithms must capture the expected driving behavior of the other competitors to feed planning algorithms that control the behavior of their vehicles.  Within the closed-loop simulation environment, the resulting steering, throttle, and braking commands produced by the controller are used to adjust the virtual racecar’s position on the track.

Moving beyond these traditional areas of AV development, the university teams must also train their software to sense track conditions and vehicle performance -- just as a professional racecar driver does. As their vehicles are pushed to the edge of performance, teams must monitor effects like tire degradation and the amount of resulting understeer or oversteer so they can adjust their speed and racing line to maintain control all while navigating around other vehicles and racing at high speeds.

Conquering these challenges is an impressive feat, but it doesn't ensure victory, only that the vehicle will operate on the track. Racing strategy is also an essential factor. Teams must teach their autonomous racecars different strategies, such as the best racing line on the track, how to modify a racing line if a vehicle takes the inside of a turn or squeezes them from the outside, and how to use drafting accelerate and overtake a lead vehicle.

Design News: What does Ansys hope to achieve or demonstrate by entering this contest?

John Zinn: Broadly speaking, Ansys, the IAC's organizers, and supporting partners share a goal of enabling the accelerated development of software that can overcome barriers to commercialization of fully autonomous vehicles and enhance ADAS in cars under human control. We hope that this exciting event can also inspire the next generation of STEM talent.

Ansys is the exclusive simulation sponsor of the Indy Autonomous Challenge (IAC), providing the teams with a driving simulator power by  SCANeR and Ansys SCADE Suite hosted on Microsoft Azure.