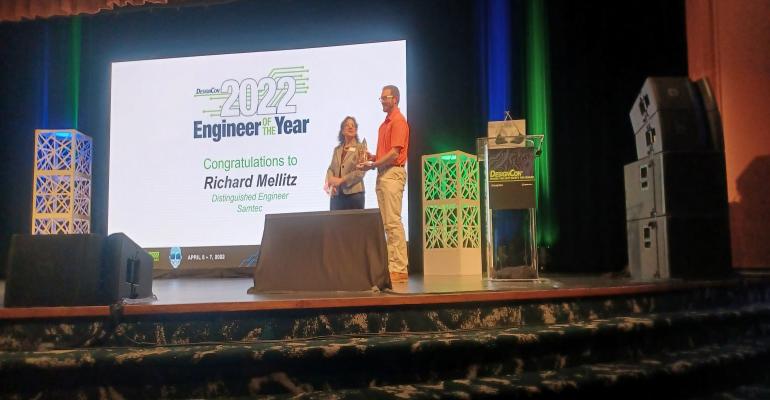 Naomi Price, Conference Director for DesignCon, presents the Engineer of the Year award to John Riley, Design Engineer at Samtec. Riley accepted the award for Richard Mellitz, who could not attend but delivered a brief video acceptance speech at the show.
Samtec engineer caps off a long career pioneering TDR and other signal integrity work with top engineering honors at the recent DesignCon Conference.

Long before signal integrity gained recognition as a key engineering requirement, Richard Mellitz researched measuring and analyzing electrical signals, even in his early days as an engineer with Digital Equipment Corporation (DEC). Always on the cutting edge of industry trends, Mellitz’s long and distinguished career in electronics signal engineering and standards work led to him winning this year’s DesignCon award for Engineer of the Year.

Mellitz, Distinguished Engineer at Samtec, was selected as the winner of a distinguished group of engineers whose industry contributions are equally as impressive. The group includes Scott McMorrow, CTO for Samtec’s Signal Integrity Group, Inc.; Lambert (Bert) Simonovich, Founder of Lamsim Enterprises; and Scott Sandler, founder of PicoTest.

Related: Vote for the 2022 Engineer of the Year

The signal integrity work Mellitz has been involved in over the past five decades is the basis for many modern-day signaling standards. Mellitz did pioneering research TDR (time domain reflectometry), which led to the development of a TDR standard that is used today throughout the printed circuit board industry.  He later founded and chaired an IPC committee that developed a method to measure printed circuit board test loss.

“When I was with Digital Equipment Corp. in the 1970s, I was involved in testing and understood the electrical nature of digital signal testing,” Mellitz said in a recent interview with DesignNews. Mellitz added that developing standards was important because “No matter what we did, we got different answers from different vendors. We could at least get consistency if we had a standard.”

In the 1980s, Mellitz got involved with the fledgling movement toward computer buses, starting with the GPIB bus. He joined Intel and became a Principal Engineer in the Platform Engineering Group. Mellitz was a key member of various Intel processor and I/0 bus teams, including Itanium, Pentium, PCI Express, SAS, and Fabric.

Mellitz was instrumental in helping to develop the channel sections IEEE802.3 backplane and cabling standards, as well as the time domain ISI and return loss standards for IEEE802.3 Ethernet, known as COM (Channel Operating Margin) and ERL (Effective Return Loss).

For Mellitz, the importance of understanding and resolving signal integrity issues comes down to economics. He recalls teaching a signal integrity course where the first slide was a dollar sign. “Economics and the bottom line are the most important. You have to bring it down to something meaningful.”

After a long career at Intel, Mellitz moved to Samtec, best known as a connector company.  Mellitz had moved to South Carolina, and Intel at the time did not want remote workers. “I was about to retire, but then Samtec called me. I was eventually able to get some of the other engineers who worked with me at Intel to join Samtec.”

Not coincidentally, Samtec has in recent years evolved from being a connector supplier to one doing more research and development on high-speed interconnects. Analyzing and resolving signal integrity issues is key to the success of these connectors.

In the future, Mellitz sees trends such as optical links gradually supplanting copper wire, as operating frequencies continue to rise. But the issues will remain the same.

“We’re not done with signal integrity. The criteria keeps on changing, and our understanding of the information needs to keep growing.”