Human Brain Inspires Design of Chips That Can Rewire Themselves 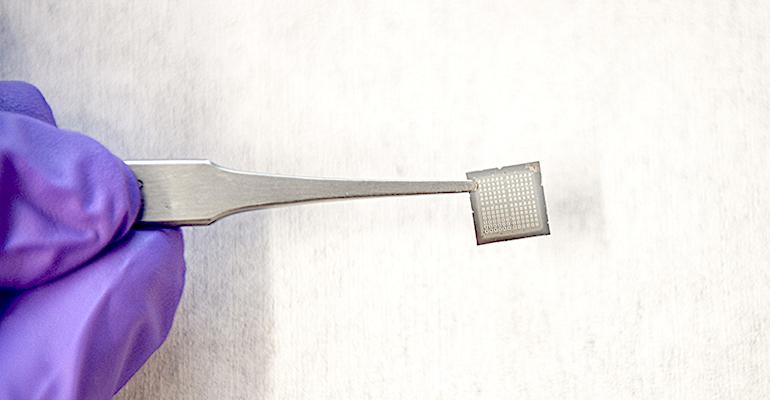 An electronic chip that can be reprogrammed on demand may enable artificial intelligence to learn more continuously as the human brain does, researchers have discovered.
Novel hardware developed by researchers at Purdue University paves the way for fully-functioning artificial neural networks

Though technology has come a long way, it still can’t compete with the human body when it comes to certain types of performance.

The human brain, for example, can adapt when it learns something new. Artificial intelligence, however, generally forgets information that it learns.

Researchers from Purdue University are trying to imbue this quality into AI through new research that demonstrates a way computer chips could dynamically rewire themselves to absorb new data as the human brain does, they said. Their aim is to one day build a human brain in the form of a chip, something for which their research paves a way, researchers said.

This work ultimately can help AI—which is growing in sophistication by using more and more data to recognize images, learn languages, and perform other complex tasks—to retain this data over time, they said.

“The brains of living beings can continuously learn throughout their lifespan,” said Shriram Ramanathan, a professor in Purdue University’s School of Materials Engineering who specializes in discovering how materials could mimic the brain to improve computing. “We have now created an artificial platform for machines to learn throughout their lifespan.”

The brain is perhaps the most complex and dynamic—and natural--computer system in the world, forming new connections between neurons to enable learning. However, though circuits on computer chips have paved the way for incredible technological advancements, they haven’t changed over time.

Therein lies a problem for making AI work autonomously in technology—such as autonomous vehicles or robots—that would have to make decisions for themselves without human intervention, researchers said.

However, if AI could be embedded directly into hardware like chips instead of running on software as it does today, it could enable these machines to operate more efficiently and dynamically, they said.

To that end, Ramanathan and his team built a new piece of hardware—a small, rectangular device made of a material called perovskite nickelate--that can be reprogrammed on demand through electrical pulses.

Perovskite nickelate is very sensitive to hydrogen, which means that by applying electrical pulses at different voltages, the device can shuffle a significant concentration of hydrogen ions in nanoseconds. This shuffling creates states that researchers found could be mapped out to corresponding functions in the brain, Ramanathan said.

When the device has more hydrogen near its center, for example, it can act as a neuron, which is a single nerve cell found in the brain. With less hydrogen at that location, the device serves as a synapse' or a connection between neurons—what the brain uses to store memory in complex neural circuits.

On the Path to Artificial Neural Networks

“If we want to build a computer or a machine that is inspired by the brain, then correspondingly, we want to have the ability to continuously program, reprogram and change the chip,” Ramanathan explained.

Indeed, by achieving this type of adaptability in a piece of hardware, researchers could create a device that could process all of the functions necessary to build a brain-inspired computer, he said.

The Purdue team worked with collaborators at Santa Clara University and Portland State University, who created simulations of the experimental data to demonstrate that the internal physics of the hardware creates a dynamic structure for an artificial neural network, they said.

The Purdue team built the device—which operates at room temperature--using standard semiconductor-compatible fabrication techniques. For this reason, Ramanathan has hopes that this blueprint can easily be adopted by the semiconductor industry.

In the future, the team plans to demonstrate these concepts on large-scale test chips that ultimately would be used to build a brain-inspired computer, researchers said.