Energy-Harvesting Wearable Made from Recycled Materials

Image courtesy of the University of Surrey 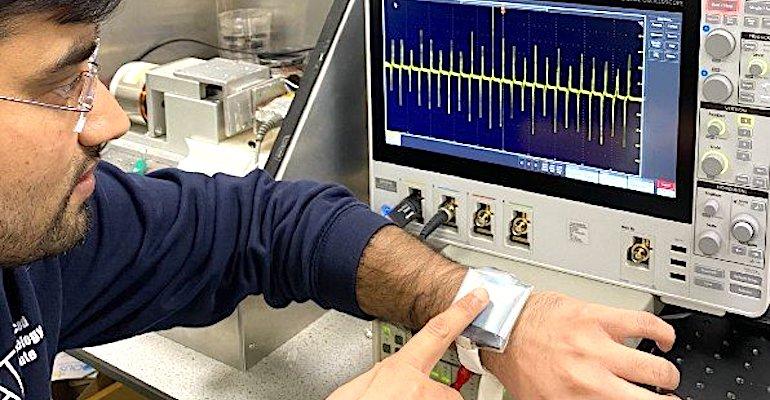 Researchers in the United Kingdom have developed a new, self-powered device made from common, recycled materials, paving the way for more sustainable technology to be used in smart watches and other IoT devices.

Scientists from the University of Surrey developed the wearable wrist device, which can transmit Morse code and runs on energy harvested by the movements of the person wearing it. What’s more, the device was fabricated from discarded paper wipes and plastic cups, upcycling these materials for a new purpose.

This reuse of materials could solve some of the ecological issues associated with the material waste caused by the myriad electronic devices that have become part of our daily lives, noted Bhaskar Dudem, project lead and research fellow at the University of Surrey's Advanced Technology Institute (ATI).

"It won't be long until we have to ask ourselves which of the items we own are not connected to the internet,” he said in a press statement. “However, the current internet-of-things (IoT) revolution highlights the simple fact that our planet doesn't have the raw resources to continue to make these devices which are in such high demand.”

Creating the device--which uses triboelectric nanogenerators (TENGs) to harvest energy—now shows that wearables of the future can be more sustainable, minimizing the impact on the environment, Dudem said.

"Our research demonstrates that there is a path to creating sustainable technology that runs on electricity powered by us, the users of that technology,” he said in a press statement.

TENGs use static electricity that occurs when two materials rub together to produce an electric charge, a process called electrostatic induction.

In the device, the TENG is comprised of plastic waste and carbon-coated paper wipes collected from a trash can, researchers reported in a paper on their work published in the journal Applied Materials & Interfaces.

“The … TENG is then used for powering low-power electronic devices and, later, to generate a Morse code from a wearable for autonomous communication,” they wrote.

The Morse code transmitted by the device is then decoded from a customized LabVIEW program to read the transmitted signal, researchers added. They also created a nine-segment keyboard using nine TENGs that are connected to an Arduino controller, which displays the nine-segment actuation on a computer screen, they said.

Given the capability of the device that they demonstrated, the team believes the technology can be applied to future self-powered sensors and IoT systems comprised of consumer, medical, or other devices, they said.