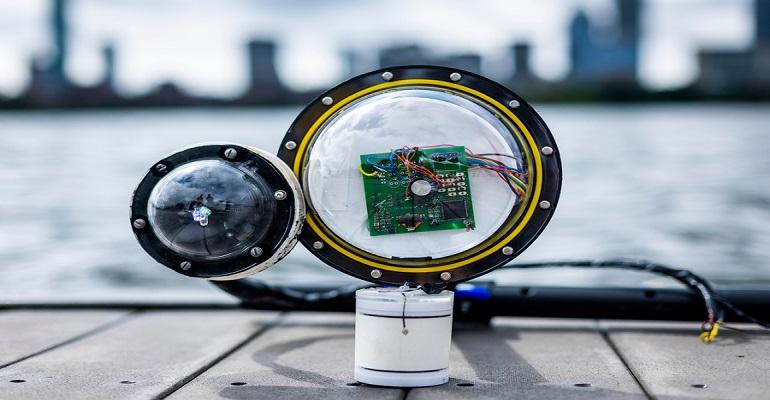 MIT researchers have developed a camera that uses piezoelectric transducers to detect sound waves from underwater life or objects and convert that information into images.
The device could help scientists explore unknown regions of the ocean, track pollution, or monitor the effects of climate change.

One of the obstacles to undersea exploration has been the high cost to power cameras, involving either tethering the camera to a research vessel or sending a ship to recharge its batteries. In an attempt to resolve this problem, MIT researchers have developed a battery-free, wireless underwater camera that is reportedly far more energy-efficient than other undersea cameras.

The autonomous camera is designed to take color photos, even in dark underwater environments, and transmits image data wirelessly through the water. The camera converts mechanical energy from sound waves traveling through water into electrical energy that in turn powers its imaging and communications equipment. The camera also uses sound waves to transmit captured image data to a receiver that reconstructs the image.

Related: 20 Amazing Years of the Hubble Advanced Camera for Surveys

Without requiring a power source, the camera can potentially operate for weeks before retrieval. This would enable scientists to conduct underseas exploration in remote regions, as well as help environmental scientists capture images of ocean pollution or monitor the health and growth of fish raised in aquaculture farms.

“One of the most exciting applications of this camera for me personally is in the context of climate monitoring,” said Fadel Adib, associate professor in the Department of Electrical Engineering and Computer Science and director of the Signal Kinetics group in the MIT Media Lab, and senior author of a new paper on the system. “We are building climate models, but we are missing data from over 95 percent of the ocean. This technology could help us build more accurate climate models and better understand how climate change impacts the underwater world.”

Related: Could a Wireless Camera Improve Safety, Cost, & Efficiency in the OR?

The scientists relied on energy harvesting principles to build the camera. The camera acquires energy using transducers made from piezoelectric materials placed around its exterior. When a sound wave traveling through the water hits the piezoelectric transducers, they vibrate and convert that mechanical energy into electrical energy.

Those sound waves could come from any source. The camera stores harvested energy until it has built up enough to power the electronics that take photos and communicate data.

The scientists deployed off-the-shelf, ultra-low-power imaging sensors to provide the camera functions. But to achieve the necessary illumination in dark undersea environments as well as provide the ability to produce a color image, the scientists used red, green, and blue (RGB) LEDs to illuminate the grayscale image being captured. The red, green, and blue colored light is reflected in the white part of each photo, and the image data is combined in post-processing to reconstruct the color image.

Using a process called underwater backscatter, the camera sends the digital image data is sent to a receiver. The receiver transmits sound waves through the water to the camera, which acts as a mirror to reflect those waves. The camera either reflects a wave back to the receiver or changes its mirror to an absorber so that it does not reflect back.

A hydrophone next to the transmitter senses if a signal is reflected back from the camera. The system uses binary information to reconstruct and post-process the image.

Having constructed a working prototype and testing it in several underwater environments, the researchers plan to enhance the device for deployment in real-world settings. They want to increase the camera’s memory so it could capture photos in real-time, stream images, or even shoot underwater video. The scientists also want to extend the camera’s range beyond the 40 meters from the receiver used in trials, thus enabling the camera to operate in more underwater settings.

Spencer Chin is a Senior Editor for Design News covering the electronics beat. He has many years of experience covering developments in components, semiconductors, subsystems, power, and other facets of electronics from both a business/supply-chain and technology perspective. He can be reached at Spencer.Chin[email protected]