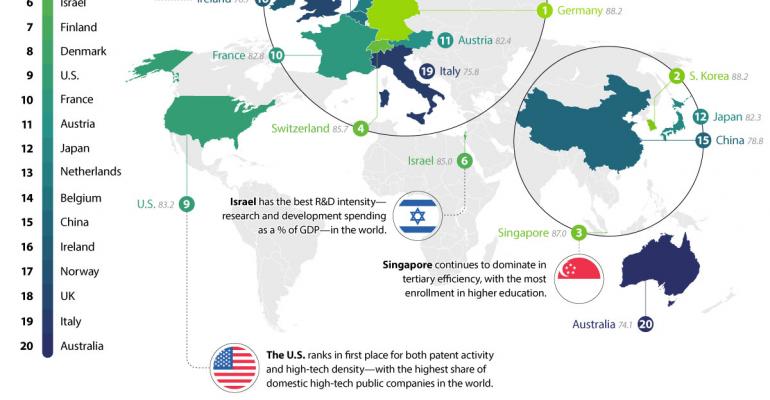 New competitors are on the rise. So why has the United States lost significant footing on the Innovation Index in recent years?

Bloomberg has released the 2020 edition of its yearly “Innovation Index,” ranking the world's 60 most innovative economies worldwide, and the United States has dropped to 9th place overall.

1.) R&D Intensity
Annual research and development spending, as a % of an economy’s gross domestic product (GDP).

2.)Patent Activity
The number of annual patent and grant filings, and the 3-year average growth of filings abroad and filings growth, as a share of the world’s total patent growth.

4.) Manufacturing Value-added
Manufacturing output levels—contributing to exports—as a % of GDP, and per capita.

5.) Productivity
GDP and gross national income (GNI) in the working age population, and the 3-year improvement.

6.)High-tech Density
The volume of domestic, high-tech public companies as a share of the world’s total companies. Examples of high-tech companies include: aerospace and defense, biotech, internet services, and renewable energy.

7.) Researcher Concentration
Professionals (including postgraduate PhD students) engaged in R&D across the population.

Though it occupied the no. 9 spot, the U.S. actually ranks first in both patent activity and high-tech density. This shouldn't come as a big surprise given that the Big Five tech companies – Apple, Microsoft, Alphabet (parent company of Google), Facebook, and Amazon – all call the US home. The country has the highest overall density of tech companies in the world. Each of the Big Five has a significant influence on their own in the patent market and there is an ever-expanding ecosystem of both startups and established companies whose products and patents depend on at least one of the Big Five, whether it is for hardware support or cloud-based computing services.

Still, the US dropped one place from last year, giving up the no. 8 position to Denmark, which ranked no. 1 overall in the world in research concentration and climbed three spots in the rankings since last year.

Germany took the top overall ranking this year for its combination of high-tech density and patent activity, which is actually tied with the US. Germany overtook South Korea, which had maintained a firm grasp as the no. 1 most innovative economy in the world for six years running. South Korea did still rank highly at no. 2 overall, with itss best performing metric being its R&D intensity. Israel, which has become a hotbed of tech startups and research in recent years placed first overall in R&D intensity and was judged to be the no. 6-ranked innovative economy.

The Struggles of US Innovation

The US has seen itself on a steady decline down the Innovation Index. When the Bloomberg index debuted in 2013, the US took the no. 1 spot. The years between then and now have seen some significant ups and downs for tech and manufacturing in the United States. The rise of advanced manufacturing in the US has opened up new business opportunities in areas ranging from 3D printing/additive manufacturing, to robotics, artificial intelligence, and blockchain. But the rise in automation has also brought growing concerns over long-term job stability and economic impact.

By contrast however, the Obama Administration also ushered in a stimulus bill that saw an unprecedented investment in green energy, broadband infrastructure, and electronic medical records but has had a less than stellar long-term impact. Critics of the stimulus say its energy investments in particular have not born fruit due to several of the companies that received the stimulus going under. Battery manufacturing plants in Michigan for example received stimulus investments, but folded after funds were mishandled or, in one case, outright misused.

A New Contender on the Rise

One country that is notably on the rise in the Innovation Index however is the US's favorite trade war opponent – China. China is up to no. 15 in the overall rankings. It was no. 21 only as recently as 2017.

A big part of China's rise to contention is its aggressive level of patent activity. Since 2015 the country has reportedly filed over 6,000 patents related to a range of emerging technologies including artificial intelligence, batteries, blockchain, autonomous driving, and quantum computing.

The ongoing trade battle between the US and China is affecting both of their abilities to innovate. According to a 2019 survey by IPC, an analyst firm that studies the electronics manufacturing industry, almost 90% of US electronics manufacturers are troubled by the higher tariffs both countries have imposed on each other's exports. This has also created an environment where investors are shying away from US manufacturing, which in turn slows hiring.

At the beginning of 2020, the US and China eased some of these tensions by signing a first-phase trade deal where the US agreed to remove tariffs on some Chinese goods in exchange for China agreeing to purchase more US exported goods. Critics of the deal however argue it doesn't go far enough to address concerns over intellectual property theft on China's part.

But China's innovation economy is not without its challenges. The outbreak of the Coronavirus is already having a significant impact on China's economy and may have long-standing ripple effects that could see China's ranking slipping by this time next year. Granted, the spread of the virus is also threatening other global economies as well as industries experience supply chain shortages and disruptions due to the outbreak. After all, let's not forget which country the Big Five outsource a good deal of their manufacturing to.

The US and China have also been engaged in a heated competition over who will emerge as the world leader in AI and related technologies. China's acceleration in the AI sector comes from a number of factors, including government investment and a political climate that is more permissive of technologies like facial recognition that America has been less bullish about due to concerns over privacy rights violations.

In 2019 President Trump signed an executive order aimed at spurring more AI-related R&D in the U.S. But it's too early to tell whether the initiative will bear much fruit.

Other countries are also looking at China as a major threat to their position on the Innovation Index. South Korea, home to big names like Samsung, LG, and Hyundai, is emphasizing education as means to hold on to and increase its position. Speaking with Bloomberg Chang Suk-Gwon, a business management professor at Seoul’s Hanyang University, said that R&D spending “determines life or death for South Korean companies.”

“We don’t have any other natural resources – we only have our brains to turn to,” Chang told Bloomberg. “The expression that’s often bandied about in South Korea is the ‘super gap.’ It’s about widening whatever lead South Korea has – or else China will catch up.”

In a release statement, Bloomberg Economics chief economist, Tom Orlik, echoed similar statements for the US going forward. “Innovation is a critical driver of growth and prosperity,” Orliks aid. China’s move up the rankings, and the US drop, is a reminder that without investment in education and research, trade tariffs aren’t going to maintain America’s economic edge.”