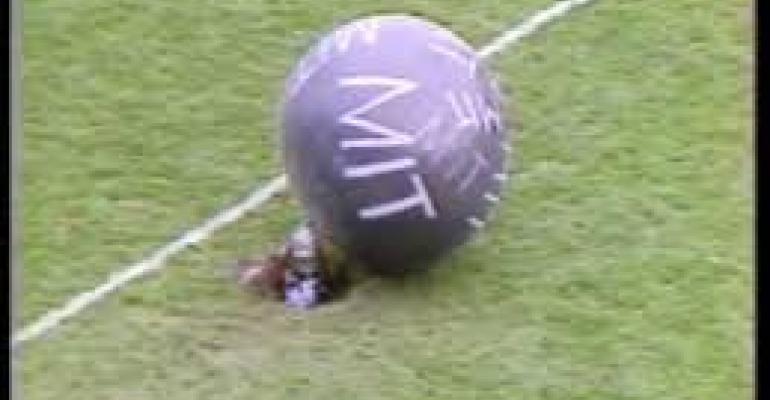 Thirty-six years ago, a few MIT engineering students pulled a prank at a major sporting event that is still impressive today.

Design News doesn’t usually refer readers to other media sites, but we’re breaking that unwritten rule today to point to a story about one of the all-time great engineering pranks.

Yesterday, ESPN published a nostalgic article about a group of MIT engineering students who disrupted a Harvard-Yale football game in 1982 by remotely inflating an eight-foot-diameter weather balloon in the middle of the field. The story, impressively detailed by author Kyle Bonagura, describes how the students buried a cylindrical, freon-driven, hydraulic press with a vacuum cleaner motor under the turf at Harvard Stadium, and then used it to inflate the balloon during the game.

At a key moment in the action, the balloon emerged from under the field. Although “MIT” was boldly written on its side in white lipstick, and an attached note explained how to put the device back into the ground, the balloon’s emergence perplexed the crowd and scared a few observers, including a security guard who drew his gun.

The prank is part of a longstanding tradition of college football pranks, but it’s more intriguing than most because of the amount of planning and engineering development that preceded it. The technology for it had been created four years earlier, in part by a student who worked in the school’s Francis Bitter Magnet Laboratory. But it had been shelved for four years before being resurrected in 1982.

The “great balloon hack” rivals another great prank: Cal Tech’s hack of the Rose Bowl scoreboard on January 1st, 1984, during one of the season’s biggest bowl games. (The scoreboard read: Cal Tech 39, MIT 9.)

Unfortunately, the MIT balloon prank didn’t earn the national media attention it could have, due to a wild incident in a separate game that same afternoon, when the Stanford band flooded onto the field during the action, changing the outcome of the Stanford-Cal game. The Stanford incident made for better news video, and the MIT prank was largely overshadowed by it in sports history.

Still, the story of the MIT balloon hack is worthy reading—especially for engineers.