HomeElectronicsKatherine Johnson Was the Hidden Figure That Put Man on the Moon
Recent
Electronics
Air Force Puts F-15EX Eagle II into Operational Testing
Dec 07, 2021
Biomaterial-Cell Binding Technology Opens New Possibilities for Medical Implants
Dec 07, 2021
Video Gaming and the Future of Medical Devices
Dec 07, 2021
VR Metaverse Driving Innovation in Games, Shopping and More
Dec 07, 2021
POLL
3D Print a Doll of Yourself and Other Strange Objects
Dec 06, 2021
The Top Generative Design Companies You Need to Know
Dec 06, 2021
Industry 5.0 Is Coming. Here’s Why You Should Care
Dec 06, 2021
What the Omicron Variant Could Mean for the Medical Device Industry
Dec 06, 2021 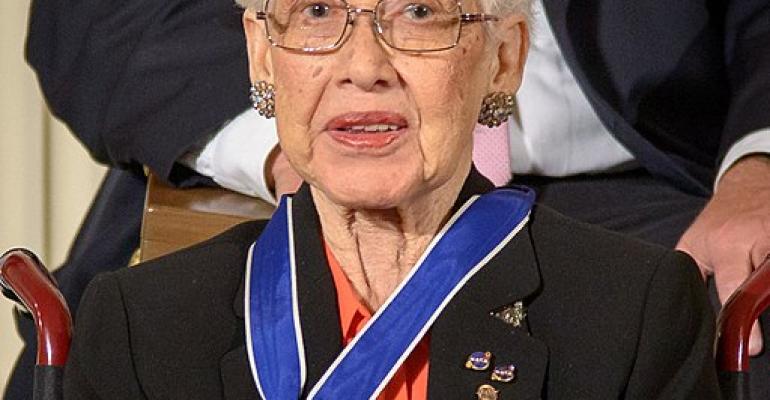 Mathematician Katherine Johnson, who played a crucial role in the success of America's space program, has passed away at the age of 101.

Katherine Johnson, one of the key mathematicians behind America's space program, and a prominent figure in black American history, died Monday at the age of 101. Her work calculating trajectories was crucial to the success of Apollo 11 as well as other several historic space missions.

Born in West Virginia in 1918 , Johnson first joined the National Advisory Committee for Aeronautics (NACA) in 1953, where she became a member of the West Area Computers, a group of African-American women tasked with performing the tedious calculations for guidance and navigation systems. Human mathematicians at the time were often called computers and NACA's female mathematicians were often ignominiously referred to as “the computers who wore skirts.” Even though they were paid less than their male counterparts, the thinking was that women had a natural attention to detail that made them ideal for the meticulous work of trajectory calculations.

The West Area Computers got their name because Jim Crow laws segregated them into working in the west area of NACA's campus. But in a time where they were separated from their peers and often overlooked Johnson, along with colleagues like Dorothy Vaughan and Mary Winston Jackson, were still able to distinguish themselves for their work.

In 1958, when NACA was dissolved and reformed into NASA, Johnson became the only female, and the only person of color, on the newly-formed Space Task Force charged with finding a way to put an American astronaut on the Moon. During her time at NASA she would contribute calculations vital to the success of the early Mercury missions as well as the Apollo program. She was among the team of engineers that worked to rescue the astronauts of the ill-fated Apollo 13 mission.

Before his mission to orbit Earth in 1962 as part of the Mercury program, astronaut John Glenn is said to have demanded that Johnson personally double-check the calculations made for his spacecraft because he didn't trust the machines.

In 1960 Johnson co-wrote the research paper “Determination of Azimuth Angle at Burnout for Placing a Satellite Over a Selected Earth Position,” which describes how spacecraft reentering Earth should fire their reentry rockets in order to land in a designated area. In writing this paper Johnson also became the first woman to ever co-author a paper at NASA.

Johnson retired from NASA in 1986, regarding her time there, she said in an interview that she never felt discriminated against. "I didn't feel the segregation at NASA, because everybody there was doing research," Johnson said in a 2011 interview with WHROTV. "You had a mission and you worked on it and it was important to you to do your job."

In 2015 Johnson was awarded the Presidential Medal of Freedom for her lifetime of work. “Katherine's legacy is a big part of the reason that my fellow astronauts and I were able to get to space,” then NASA administrator Charles Bolden said at the ceremony. “It's also a big part of the reason that today there is space for women and African-Americans in the leadership of our nation, including the White House."

In 2017 Johnson was further immortalized when she and other members of the West Area Computers (Vaughan and Jackson) were depicted in the biographical film Hidden Figures (based on a book of the same name by  Margot Lee Shetterly). The film would earn critical acclaim, including an Oscar nomination for Best Motion Picture of the Year. That same year Johnson was among the female scientists and engineers honored by Lego as part of its Women of NASA toy set.

“Ms. Johnson helped our nation enlarge the frontiers of space even as she made huge strides that also opened doors for women and people of color in the universal human quest to explore space, NASA said in a statement regarding Johnson's passing. “Her dedication and skill as a mathematician helped put humans on the moon and before that made it possible for our astronauts to take the first steps in space that we now follow on a journey to Mars...At NASA we will never forget her courage and leadership and the milestones we could not have reached without her. We will continue building on her legacy and work tirelessly to increase opportunities for everyone who has something to contribute toward the ongoing work of raising the bar of human potential.”

Katherine Johnson is survived by two daughters, six grandchildren, 11 great-grandchildren, and the countless number scientists and engineers – past, present, and future – that she has inspired with her life and legacy.