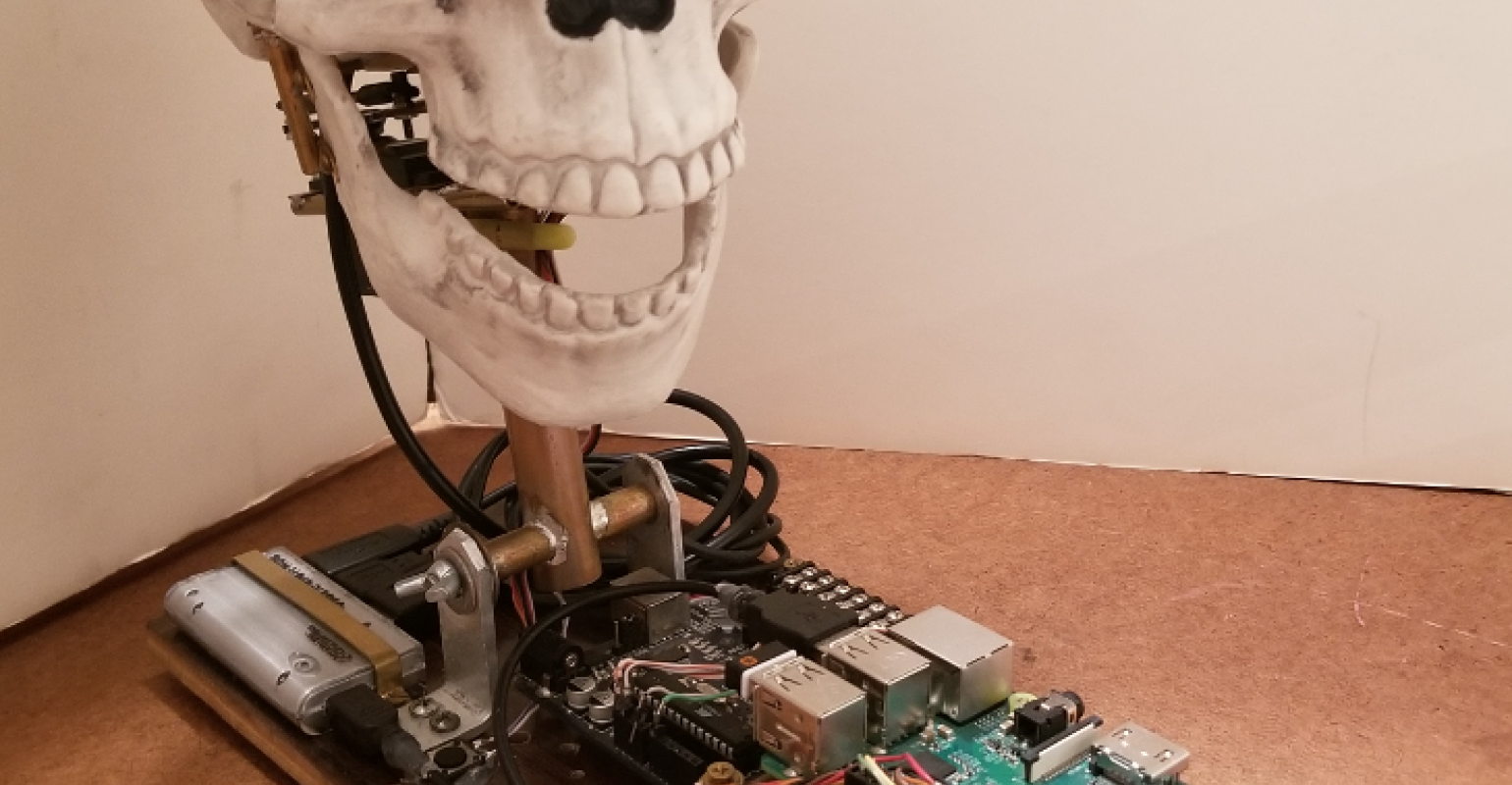 Hedley the Skull combines artificial intelligence with the low cost of the Maker movement.

Reilly, an engineering consultant and speaker, was wandering through the store last fall when he spotted an artificial plastic skull and wondered if it would be possible to make it see and talk. “I had this artificial intelligence smart camera at home and it just made sense to try to put the two together,” he recalled recently.

The result, called Hedley the Skull, is Reilly’s proof that artificial intelligence isn’t necessarily synonymous with big-budget engineering. Reilly endowed the skull with the ability to see, identify objects, track motion, turn its head to follow the motion, and synchronize the movement of its jaw with speech, so it appears to be talking. And he did it all for about $300.

“Given today’s environment with fairly inexpensive hardware and the vast amount of information on the web, just about anyone can do these kinds of projects if you have the motivation,” he told Design News.

Reilly, who writes the Dr. Torq web blog, will demonstrate Hedley at the upcoming Embedded Systems Conference in Minneapolis on Halloween. In a session titled, "How I Brought Hedley, My Smart Sensor, Linux-Powered Robotic Skull to Life," Reilly will connect the robot to a display and allow the audience to see what Hedley sees and to watch how it tracks movement.

During the demo, Reilly will wear a bar code on his chest to allow Hedley to more easily track his movements. Using the smart camera, Hedley will track Reilly and turn its head to follow him around the stage. The bar code is a help to achieving that, Reilly said, although not an absolute necessity. Reilly told us that Hedley has tracked cars in traffic and even recognized Reilly’s dog and correctly identified it as a Maltese breed.

The key to Hedley’s abilities lies in its use of a JeVois Smart Machine Vision Camera. The camera, which brings machine vision to Arduino and Raspberry Pi projects, incorporates a video sensor, quad-core ARM-based CPU, USB, and serial port. Measuring approximately 1” x 1” x 0.75”, it fits within Hedley’s right eye socket. Reilly said he bought it for $59.

Vision, however, is only a part of Hedley’s repertoire. The built-in software algorithms interpret the objects in front of the camera, identify the X-Y coordinates of the objects, and then send that information to an Arduino board that operates a servo motor, enabling Hedley’s head to turn. Similarly, Hedley uses a Raspberry Pi board to examine the software files of its synthesized voice, and then synchronize the words to a servo motor that actuates its jaw. Reilly said the synchronization was a complex process that took many hours, but wasn’t costly in terms of hardware or software.

The resulting robotic skull serves as a classic example of artificial intelligence in combination with the low cost of the maker movement, Reilly said. “Today, we have Raspberry Pi’s that have the power and utility that’s roughly the same as a laptop of five or ten years ago,” he told us. “It’s surprisingly inexpensive.”