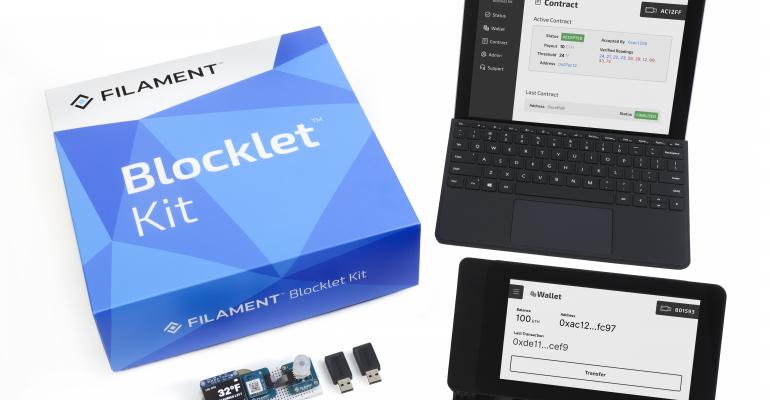 The Blocklet Foundation Kit is designed to lower the barrier to entry for embedded and IoT engineers looking to implement blockchain into their products.

Reno, Nevada-based blockchain startup Filament has made a mission out of making blockchain easier and more accessible to embedded developers. Now the company has released a blockchain development kit aimed at letting embedded and Internet of Things (IoT) engineers build and test blockchain-based solutions for edge devices and systems without the need for high-level technical training or an extensive background in blockchain.

Filament's Blocklet Foundation Kit allows developers to implement tools, applications, and scripts into a USB device that can then be inserted into an existing hardware device. The kit comes with a preloaded tablet computer, an IoT device for testing, a USB enclave, and a prewired IoT breadboard with a Blocklet UART module and ESP32 Wi-Fi/Bluetooth microcontroller. Coupled with Ethereum support and a software development kit (SDK), the idea is to give embedded engineers a fully functional environment for testing blockchain functionality.

“This new kit gives embedded developers hands-on experience to evaluate and demonstrate how IoT devices and sensors at the edge can integrate and securely transact in a blockchain without incurring the infrastructure overhead typically found in today's IoT and blockchain deployments,” Frank Friesacher, Filament's executive vice president of product, said in a press statement. “With the increasing interest in enterprise blockchain solutions we created this as a clear pathway to proof of concept and pilot projects that lay the foundation for successful production deployments.”

While blockchain technology has become most closely associated with cryptocurrencies like Bitcoin, the technology is gaining a strong foothold in enterprise because of its ability to provide highly-secure automated transactions. Cybersecurity experts have been proponents of the technology as a solution to device security in a world rapidly approaching over a trillion connected devices.

Speaking with Design News in a separate interview Raghu Bala, CEO of NetObjex, a company that leverages blockchain for asset and data management, said that blockchain will be crucial in an ecosystem of many devices communicating across a range of networks, all needing to be authenticated.

“Blockchain is very useful when you have a couple of scenarios,” Bala told Design News. “When a group of smart products is owned by a single entity, the need for Blockchain becomes less important. But that changes once you have a device that needs to communicate across what we call cross boundaries.”

Last year Filament released its first product, the Blocklet chip, a purpose-made chip designed to natively interact with blockchains. The company has since expanded its product offerings by implementing Blocklet into USB form factors – meaning developers (including connected vehicle OEMs) can add blockchain communication to a product by plugging Blocklet directly into a USB port.

In addition to the Blocklet Foundation Kit, Filament has also committed to providing consulting for companies looking to develop blockchain products via its Accelerator Service.