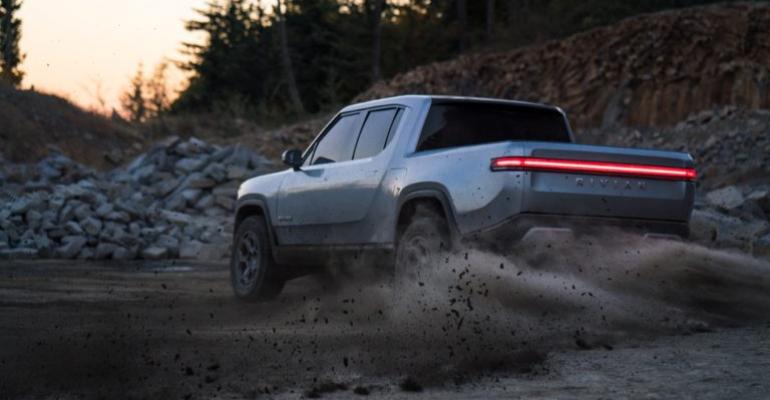 Electric truck startup Rivian is turning heads at some of the world’s largest companies.

The buzz around Rivian Automotive gained a few more decibels this week, as the tiny electric truck manufacturer netted a major investment from Amazon and considered a possible pitch from General Motors.

The upstart truck maker, which installed itself as the latest EV media sensation at the 2019 Los Angeles Auto Show, today announced a $700 million investment from Amazon. Earlier this week it also reportedly considered overtures from GM.

The news was further proof that more and more mainstream companies are seeing electrification as inevitable and are looking for a piece of the action. It also served notice that the pickup truck, once considered impractical as a target for electrification, is now viewed as the next big challenge.

Industry analysts said that the strategies of Amazon and GM make sense. “If you can make an electric pickup with 400 miles of range, 11,000 pounds of towing capacity, and a 1,800-pound payload, as Rivian says it can, then it puts your electric vehicle right at the heart of the full-size pickup truck market,” said Sam Abuelsamid, a senior analyst for Navigant Research.

Although Amazon didn’t detail its reasoning, most analysts believe the investment in Rivian is a natural extension of Amazon's growing delivery services efforts. Increasingly of late, the company has been “in-sourcing” some of its work in logistics, and has even built up a fleet of aircraft for transporting cargo.

Analysts said Amazon is likely to apply the same sort of approach to package delivery. “You could see where they would want to have their own fleet of delivery vans, especially if they could make them electric,” Abuelsamid said. “Having an investment in Rivian gives them an opportunity to use their ‘skateboard’ platform, and then put a customized body on top of it that they could apply to their own fleet.”

Abuelsamid suggested that Amazon might pair the electric trucks with its much-publicized drone idea. An electric van, for example, might serve as a container for dozens of drones, which could then be deployed on a neighborhood-by-neighborhood basis. “The truck might pull into a neighborhood, and the driver would load packages on the drones, which would then go out and drop the packages on peoples’ doorsteps,” he said. “It could make the delivery process more efficient than going door to door.”

Abuelsamid added that the appeal of an electrified truck would be twofold: It would be quieter and its operating costs would be lower than those of gasoline-burning trucks.

The connection to General Motors is less clear. In a call with Design News, a GM spokeswoman said only that the automaker “admired Rivian’s contribution” to the electric vehicle market, but declined to comment further.

Still, the move toward electrification of pickups is on virtually every automaker’s mind right now. Ford Motor Co. plans to introduce a hybridized version of the immensely-popular F-150 pickup next year. Moreover, Ford chairman William Clay Ford Jr. has openly discussed the idea of a battery-powered F-150. Other automakers are similarly announcing plans to electrify their SUVs.

The reason for doing so is obvious. In the US market, cars are falling out of style. Many automakers have announced plans to discontinue selected sedans. Meanwhile, pickup trucks are gaining ground. Last year, pickups from Ford, Chevy, and Ram were the top-three-selling vehicles in the US.

Rivian’s concepts might help address the need for electrification of the pickup truck market. Although its vehicles haven’t been publicly proven, Rivian claims 0-60 mph launch times ranging from three seconds flat to 4.9 seconds. It also has announced a maximum all-electric range of more than 400 miles. The vehicles are built atop a “skateboard” with a battery capacity of up to 180 kWh – more than twice that of an entry-level Tesla Model S.

According to analysts, buying a stake in Rivian would make absolute sense for GM, even though the giant automaker already has a pickup truck platform and a pure electric car in-house. The investment would enable GM to continue producing its gasoline- and diesel-based pickups while learning whether there’s a real market for electric trucks

“It would just be a really good opportunity for them to do a skunkworks-type project that doesn’t mess with what they already do so well,” Brett Smith, a program director at the Center for Automotive Research, told Design News.

Going outside to electrify its pickups would also give GM a chance to see whether the electrified pickup is even a feasible idea. Many automotive engineers question whether such large vehicles could be electrified at costs that appeals to consumers, Smith said.

Meanwhile, any effort to electrify its own trucks could end up interfering with sales of GM’s already-successful products, such as the Silverado. “If you think about what [GM] would have to do to their plants to put in a new product, it could end up costing them a lot more than $700 million,” Smith said.

Doing it outside, at a company like Rivian, would enable GM to keep its current programs intact. “Why would they want to mess with a well-oiled machine?” Smith asked.

For Rivian, which is still a startup, a cash-infusion of $700 million, and possibly more, would serve as a needed shot in the arm. The company has yet to sell a truck, and although it has secured a manufacturing plant in central Illinois, it is likely to need more than a billion dollars of additional capital to begin setting up production lines.

Moreover, the company’s technology is virtually unknown, and truck consumers tend to be conservative in their buying choices. “Pickup truck buyers are notoriously loyal,” Abuelsamid said. “It’s a really hard segment to break into. It’s extremely unlikely that Rivian would be able to come in and take over the full-size truck market, no matter how good their product might be.”

By forging relationships with GM and Amazon, Rivian would have a built-in customer base, which would give the company an opportunity to generate more scale and drive its costs down. It would also provide Rivian with time to await the development of better, cheaper batteries. Analysts pointed out that the company’s 180-kWh battery, at today’s costs of $200/kWh, would be priced at about $36,000 apiece.

“Taking an additional investment from Amazon, GM, or someone else was almost an inevitability anyway before they could get into production,” Abuelsamid said. “This gives Rivian something to draw on.”