5G Doesn’t Cause COVID-19! Here's Everything You Need to Debunk the Myth 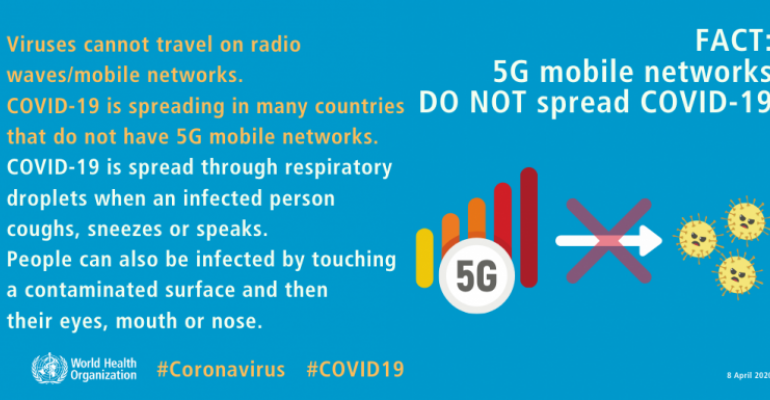 The idea that 5G causes COVID-19 may be one of the most ludicrous conspiracy theories ever. Here’s some of the strongest evidence to the contrary.

There are two key differences between the novel coronavirus that causes COVID-19 and 5G technology. One has spread across the globe, the other has barely rolled out in most countries and in some cases not at all.

That hasn’t stopped conspiracy theorists from conflating the two however. Thanks to a combination of scam artists, the reach of social media, ignorant celebrities and influencers, and general public frustration and confusion, a strange theory has emerged in the months since the global COVID-19 pandemic started.

Allegedly, 5G is the culprit behind the pandemic. Citing a lot of pseudoscience – much of it based in a failure to understand the basic concept that correlation does not equal causation – so-called “doctors” and “experts” are claiming the 5G signal somehow negatively affects the cells in our bodies – forcing them to create a waste product that we now call COVID-19. Even less plausible variations on the theory posit that the 5G signal itself is somehow carrying the coronavirus. That’s right, a biological virus is riding around on electromagnetic waves...

It’s really all too ridiculous to give credence to, but if you’re interested in the origins of this theory plenty of sites have covered it extensively.

Conspiracies around wireless technology are as old as the technology itself. Cellular, Wi-Fi, and radio signals have been blamed for everything from lowering our reproductive capability, to being a clandestine means of mind control.

The conspiracies surrounding 5G and COVID-19 are particularly insidious however because they shift blame for a very real global pandemic completely away from any actual culprits and toward an innocuous target.

In Europe the 5G/COVID-19 conspiracy has already led vandals to burn down several 5G transmission towers.

Fortunately, researchers who have been studying 5G have already been long ahead of concerns over the technology and there’s a large body of work to reference regarding 5G’s safety.

So, if you’ve got a friend who wears a tinfoil hat, or just spends too much time posting unfounded nonsense on Facebook or Twitter, here’s everything you need to debunk the 5G/COVID-19 myth:

5G Can’t Affect Everyone if It’s Not Everywhere

5G only began to publically roll out in 2018 and the first 5G phones are just now hitting stores. How is a technology that hasn’t even proliferated causing illnesses in countries that don’t even have 5G yet?

This Includes Cancer and Tumors

In 2015, researchers from NYU conducted a literature review on what is currently understood about how mmWave radiation affects the human body, with a focusing on ensuring the safety of mmWave technology for 5G mobile networks.

Among the review’s conclusions:

“...at mmWave frequencies, the photon energy is more than four orders of magnitude weaker than ionizing radiation and is thus not capable of displacing electrons, which disrupts molecular bonds; this disruption is linked to cancer.”

A Danish cohort study of of 358,403 cellphone users found “there were no increased risks of tumors of the central nervous system, providing little evidence for a causal association.”

mmWaves Do Not Deeply Penetrate the Skin

Yes, 5G Can Heat Your Skin, But it Hasn’t Been Shown to Be Harmful

The most well-understood mechanism of 5G waves is their ability to produce a measurable heat increase in surfaces, including skin. However various research into mmWaves has shown, “There seems to be no indication of mechanism or preponderance of reproducible scientific results that equivocally describe a health effect resulting from athermal mechanisms.” There’s no evidence that 5G warms at a level even as noticeable as going outside when it’s sunny.

You Can’t Have it Both Ways

Sometimes the only way to counter an outlandish claim is with an equally outlandish one. While some are blaming 5G for a pandemic, others are touting mmWaves for their health benefits. That’s right, you can buy devices (not government approved or regulated, of course) to blast yourself with mmWaves. The people behind this snake oil claim it can heal everything from chronic pain to ulcers, and even treat STDs and conditions like diabetes… Is the cure to the 5G coronavirus to hit ourselves with even more 5G waves? Maybe all those 5G phones will rid the world of disease?