HomeDesign SoftwareMakerBot Expands With Bigger NYC Factory
Recent
Design Software
Argo AI Expands to Austin and Miami in Search of More Challenges
May 18, 2022
12 Ideas that Could Change the World
May 18, 2022
Making the AC Power Main Intelligent
May 18, 2022
How to Make Sure Your Digital Transformation Doesn’t Fail
May 18, 2022
POLL
The Internet's Grooviest Slideshow of Legendary International Scouts
May 17, 2022
Electronics Industry Bolsters Root of Trust Security Efforts
May 17, 2022
3 Tips for Embedded Software Configuration Management
May 17, 2022
Novel 3D Printing Method Used to Replenish Coral Reefs
May 16, 2022

MakerBot has expanded its footprint with a new, bigger factory in Industry City, Brooklyn, that will allow it to expand its desktop 3D printing business.

The new 170,000-square-foot facility doubles production capacity compared with MakerBot’s previous factory, which was also in Industry City, a manufacturing district on the waterfront in the Sunset Park neighborhood. It’s MakerBot’s third location in Brooklyn, where the now-subsidiary of Stratasys opened its doors six years ago.

The new factory features a new layout that advances its lean manufacturing methods. he layout brings critical functions -- such as materials, production, product testing, and shipping -- closer to one another, streamlining the production process and reducing waste while ramping up efficiency, the company said.

The space also includes more room for product testing, as part of MakerBot’s plans to create the 3D printing machinery industry’s largest quality assurance operation, as well as a larger machine shop and 3D printing capabilities for both manufacturing and R&D, according to MakerBot. 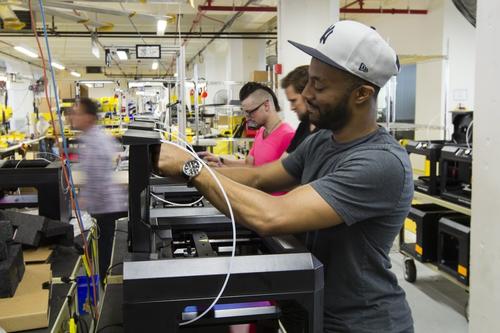 “I couldn’t think of a better place for our new factory,” said MakerBot CEO Jonathan Jaglom. “The new factory is a state-of-the-art facility with a focus on lean manufacturing and efficiency, making it one of the most advanced factories in New York City and in the global 3D printing industry. Close proximity to our R&D teams and corporate headquarters is a huge advantage as it allows us to adapt quickly to changes in the growing market of 3D printing.”

MakerBot celebrated the factory’s opening on July 22 with a ribbon-cutting ceremony featuring Jaglom and other locals with an interest in 3D printing and Brooklyn business development: Eric Adams, Brooklyn's borough president; Dan Freedman, dean of the School of Science and Engineering at SUNY New Paltz; and Randy Asher, principal of Brooklyn Technical High School.