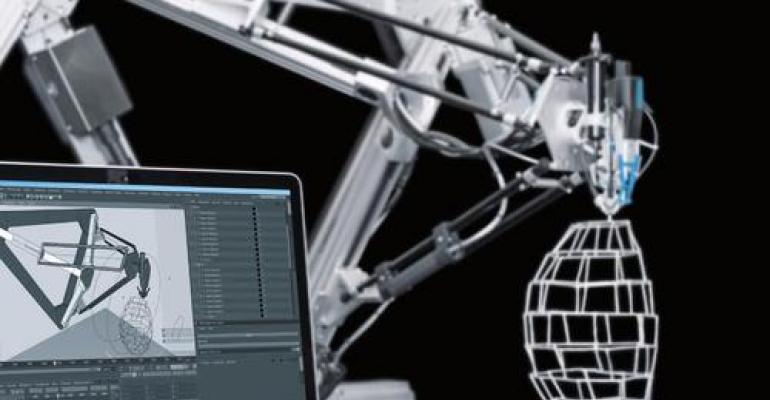 While biomimicry -- using nature to inspire design -- seems to be seen very often in materials science, device designers are also seeing the value in observing nature to improve design. The engineering and design team at German robotics and automation company Festo are a prime example, with the introduction of a new 3D printer model aptly called the Cocooner, which was inspired by how caterpillars build cocoons.

The 3D Cocooner, developed as part of Festo's Bionic Learning Network, creates structures differently than other 3D printers in that it doesn't build them up one surface layer at a time, but creates them freely in space, according to Festo. 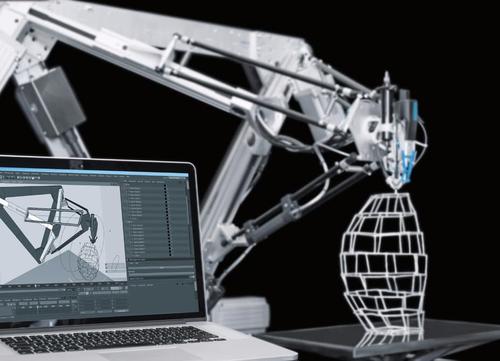 "Just like a caterpillar, it spins delicate shapes and creates custom-made lightweight structures out of a glass-fiber thread," the company said in a description of the printer on its website. "With the help of a handling system, the spinneret can be precisely maneuvered and the glass fibers, which are simultaneously laminated with UV-curing resin, are glued together to form complex structures."

The Cocooner does this using a tripod from the standard Festo range that developers equipped with a special nozzle. UV-curing resin helps the apparatus spin soft glass-fiber thread into complex yet stable shapes that are similar to natural structures. The kinematics receive the necessary control commands directly from the design program in which the three-dimensional shape model is generated.

Your Data. Get It. Protect It. Practical information on embedding sensors in 3DP, automation & inventory control, big data as a diagnostic tool, cloud storage and security risks, and more in the Industry 4.0: Smart Strategies for Data Collection and Protection track at Automation Technology, Sept. 21-22, 2016 in Minneapolis. Register here for the event, hosted by Design News’ parent company UBM.

The current design offers a construction space of 450 mm x 300 mm x 600 mm (17.7 inch x 11.8 inch x 23.6 inch) and a print speed of 10 mm per second. This new way of doing things will allow for the production of shapes and structures that aren't possible using current methods of 3D printing, according to Festo.

"Complex bodies, which up until now have only been able to be depicted as a virtual model in a computer simulation, are now taking a physical and tangible form, the company said. "Geometric corrections can already be made at an early stage, which makes the design process significantly easier. The thread can be reset at any point on the lattice structure, where it continues to build. This ultimately results in an almost endless variety of design options using minimal amounts of material."

Several 3D Cocooners can be connected via a network, allowing for the construction of extensive structures within a very short time. These structures also have unprecedented stability thanks to the tensile and bending strength of the UV-cured glass fiber, according to Festo.

The Cocooner is not the first of Festo's products to take its cue from nature; indeed, the actual aim of its Bionic Learning Network is to use biomimicry to build better products. Other inventions to come from the network include the SmartBird and the BionicKangaroo, which can harvest energy from its own jumps for power.