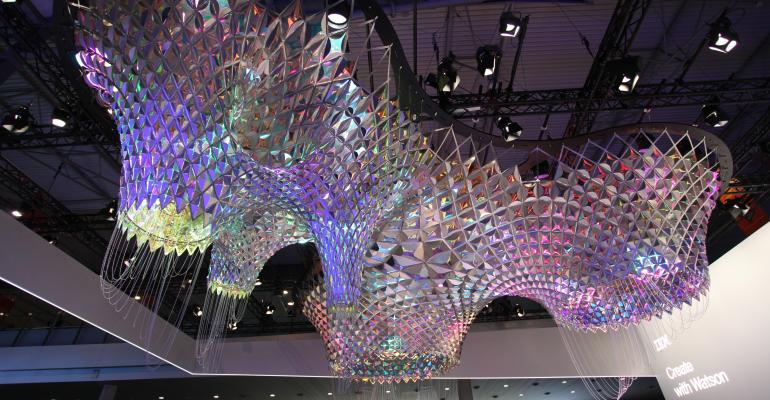 Attendees at Mobile World Congress 2017 are being treated to a work of art that was created with the help of IBM Watson's machine learning tools.

Watson is already very good at recognizing images. Drop in an image of a building and it will tell you the type of building and even what materials it's likely made of. But New York City-based design studio SOFTlab wanted to know if Watson could do more than just recognize art. Could Watson help create it?

It turns out it can. IBM is calling it the first “thinking sculpture” – an art piece that helped pick its own materials, shapes, and colors.

Antoni Gaudí was a 19th century Spanish architect whose avant-garde work has become synonymous with the look and feel of Barcelona. Inspired by naturally-occurring forms, Gaudí was known for his unique treatment of materials, including ceramics, that has given his pieces, including his most well-known work – the Sagrada Família – their distinctive look.

As MWC 2017 is being held in Barcelona this week, SOFTlab decided creating a sculpture inspired by Gaudí's work would be the perfect task to set Watson to for the event. The team at SOFTlab fed Watson a plethora of academic and artistic work around Gaudí and the city of Barcelona, including images, articles, literature, and even music – teaching it to become an expert on Gaudi and his design process. From there Watson was able to identify themes and patterns in Gaudi's work, including his use of materials, and was then able to suggest designs based on its knowledge.

Watson was able to recognize structures, elements, and features in [Gaudí's] art and his work,” Jonas Nwuke, Manager, IBM Watson, told Design News. “It gets to the essence of an image and when it looks at another it tries to make sense of that image through what it's been taught.”

Essentially by teaching Watson the difference between two categories (i.e. an image of a Gaudí structure and a non-Gaudí structure), via its Visual Recognition API, Watson is able to learn the difference between the two. The more examples it has, the better it gets. It can then take in new images and figure out what category they belong in. The other half was performed by Watson's AlchemyLanguage API, which analyzes text and language for keywords, taxonomy, and concepts that it is taught. Again, the more text about Gaudí the system is exposed to, the better it gets at recognizing words, phrases, and even emotions associated with his work.

While certain patterns in Gaudí's structures, such as waves and arches, would be clear to any architect well-versed in his work, Watson was also able to draw on its existing database and find less obvious connections in forms found in things like crabs, spiders, shells, and even candies. It also helped the designers with their material selection based on their criteria, helping them to arrive at the color scheme (ultramarine blue, jade green, yellow and orange) as well as the the iridescent dichroic film material used throughout the sculpture.

As an added layer, the sculpture is also being fed social media data from MWC attendees via Twitter and it is able to move and reshape itself based on the emotions it reads from the tweets by utilizing Watson's Tone Analyzer API.

“As we've opened up the Watson platform for developers and makers what we found was there were some creative pursuits that presented themselves,” Nwuke said. “Our engineering team got involved in creating food recipes, music, fashion, even movie trailers ... 2017 has become the year that we are going to see what Watson can do in the architectural field.”

Nwuke said a lot what IBM looks at when bringing Watson into the real world is very constrained. This collaboration with SOFTlab presented an opportunity to see how well Watson could be applied to a purely creative endeavour. And though this particular instance was centered around Gaudi, Nwuke added that Watson could be trained in expertise in any artist and could even be trained on multiple artists in order to mix and match influences.

The same concept could be extended into areas of design including product engineering. Perhaps a design engineer wants to create a product inspired by a certain artist, form, or even other product, or maybe they're looking to find patterns and associations in existing product designs. Watson could be taught to become an expert on a particular product and design and assist engineers in the design process, including material selection.

Nwuke pointed to another project, OmniEarth as an example of how robust and flexible Watson's visual recognition is. OmniEarth is leveraging Watson's services to analyze satellite images for water conversation, by being able to classify irrigable, irrigated and non-irrigated areas, agricultural zones, lawns, and even swimming pools.

But the goal is not to have Watson design something, according to Nwuke. It's part of an initiative IBM is calling “augmented intelligence.” “The endgame is not to replace [architects], it's to provide a way to augment them,” Nwuke said.