How to Machine Aerospace-Grade Composites 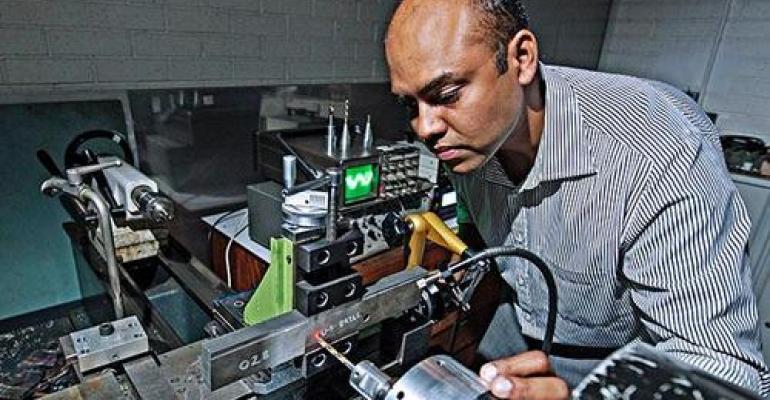 A research team at Loughborough University in the UK has come up with a method for machining aerospace-grade, carbon fiber-reinforced composites. The method is based on a device that uses ultrasound to help soften the carbon composite material in the area being worked. It also works on high-strength aerospace alloys.

The research team is headed by Vladimir Babitsky, a professor in the university's Wolfson School of Mechanical and Manufacturing Engineering, who invented the technique. During the last several years, he's been developing the method along with senior lecturer Anish Roy and professor Vadim Silberschmidt.

The ultrasonically assisted machining (UAM) device combines a traditional turning, drilling, or milling machine with a specially designed piezoelectric transducer. It creates ultrasonic vibrations at frequencies between 20 kHz and 39 kHz. This ultrasound-assisted cutting technique makes the composite, which is usually quite stiff and brittle, so soft that less force is needed. Consequently, far less damage is done to the material. 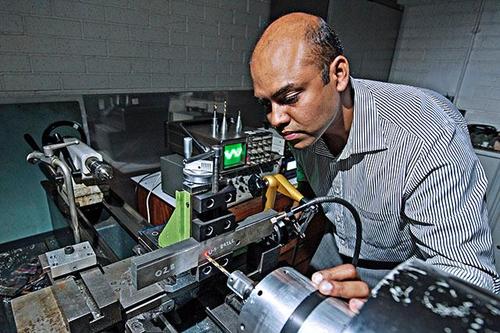 Roy said in a press release that, at least in the laboratory, the UAM device has made it much easier to cut aerospace alloys and composites. "It is like cutting through butter."

Any kind of machining can damage composites, Roy said, but the UAM technique causes far less damage, generates less waste, and results in a better finish. The team's challenge is to reduce damage even further by reducing drilling force even more. Vaibhav Phadnis, who worked on a doctoral project in UAM while at the university and more recently has been working with Airbus, said in the release that the device's cost-effectiveness and easy setup and use make the technology attractive for aerospace manufacturing processes.

He and Farrukh Makhdum, a fellow doctoral student, helped refine the drilling technique used on carbon fiber composites. They published their work last year in an article also authored by Roy and Silberschmidt in the journal Composites Part A: Applied Science and Manufacturing. Phadnis is now a project engineer at Sheffield University's Advanced Manufacturing Research Centre.

Aerospace isn't the only place where UAM can be used. It's also being applied to biomedical applications -- for example, for drilling holes in bones before orthopedic surgery -- and it is showing promise for drilling very small holes in printed circuit boards for high-precision component assembly.