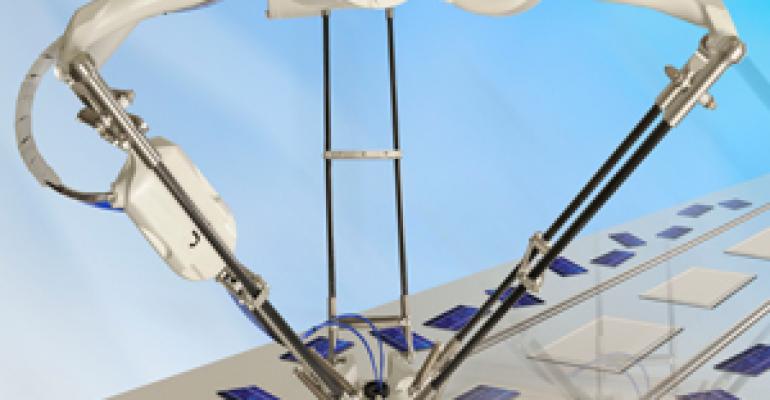 The Delta, or parallel-link-style robot, has become well-established in industry as a high-speed solution by taking the motor mass that made it hard to quickly move a robot arm and placing it at the top of the robot. Now, a new three-axis wrist is taking the Delta robot design concept a step further by delivering wrist motions that allow the robot to pick, spin and place objects at up to 2,000 degrees per second.

"We worked within the general design guidelines of a Delta style robot, which has three legs and all of the motors up at the top," says Mike Cicco, director of engineering for Material Handling robots at FANUC Robotics America Inc. "But the bottom faceplate of these robots could not tip in any way; on some models it could rotate, but there was no way to change its orientation."

Looking at ways to improve the basic design, Cicco says FANUC Robotics looked at different methods to drive articulation down to the end of the robot arms. They decided to put three motors in line with the link arms of the robot itself and create a six axis version of its M-3iA robot with a three-axis articulated wrist.

"What we've done is put three small servo motors, one in each leg, and each motor powers a driveshaft that comes out of the bottom," Cicco says.

"The drive shaft attaches to a universal joint at the bottom of the arm and then, within the wrist itself, a series of precise gears and reductions rotate each joint of the wrist mechanism."

The first motor spins joint four (J4) which rotates the first axis and basically spins the entire wrist. The next joint (J5) pivots the wrist back and forth. And the last motor connected to J6 spins the metallic faceplate at the bottom of the robot.

A key to the FANUC Robotics design is that the universal joint mounted on the side keeps the shaft length fixed. Cicco says it also allowed the company's four-axis version, which provides a single-axis wrist, to create a 20-mm-diameter hole in the middle of the wrist for air tubes. A four-axis M-3iA with single-axis wrist is also targeting simple assembly and high-speed picking operations, but offers higher speeds - up to 4,000 degrees per second. In addition, the hollow wrist allows hoses and cables to be routed internally, which minimizes wear and tear on the tooling cables.

Designed for Simple and Complex Assemblies

The new M-3iA parallel-link robot is designed to maximize speed and flexibility for assembly, small part handling and picking applications, and is a larger version of the company's M-1iA robot introduced last year. Both the four- and six-axis models can accommodate payloads up to 6kg and Cicco says they have the largest work envelope of any robot in its class (1,350 x 500 mm).

The six-axis model and its three-axis, patent-pending wrist mechanism are targeting more complex assembly tasks. The new wrist design enables the robot to pick up and insert parts at simple or compound angles, and twist parts into place, similar to the flexibility offered by a manual operator.

"The M-3iA's design makes it possible to automate the assembly of a variety of applications that could not be done with traditional SCARA-type robots," says David Bruce, product manager for FANUC Robotics. "We refer to this series of parallel-link robots as fists, because they provide the accuracy and flexibility of a human hand."

"The M-3iA is designed for use in both the simple and complex assembly processes related to electronics, medical devices, pharmaceuticals, cosmetics, office supplies, consumer products and solar panels," says Bruce. "A completely enclosed structure also makes it safe for food environments."

With the fundamental speed advantage of the parallel-link robot and the increased flexibility the wrist provides for handling products, one goal for the designers is to explore the new types of motions that can be created, as well as new application areas for the robot.

"With packaging applications trying to reduce waste and product designers deciding what looks best for the product, many users would like to have the robot be able to pick up a product that sits flat and put it down either at an angle or standing straight up," Cicco says.

One application for the new technology is what's called "coin stacking" of cookies. In this example, the robots need to be able to pick cookies either straight up and down or at an angle, and load them into a tray at a different angle.

Another application is de-scrambling of bottles. When plastic bottles for shampoo or detergents are molded, they are often dumped into a big hopper. The idea is to find a bottle that is lying flat, pick it up, turn it right-side-up and load it onto the conveyor that goes into the filling line.

"The new robot adds the dimension of what we call pitch and yaw, and enables the user to do more than just rotate parts," Cicco says. "Products can be turned up on end and placed at specific angles."

Another potential application is high-speed assembly of larger products. FANUC introduced the M1iA a year ago, which is a much smaller six-axis version of this robot, but can only pick up 500 gm and has a small work envelope. The M6iA robot now offers a 6 kg payload and its work envelope is a 1.35m-diameter disk. It can work in a cylindrical work area that is 1,350 mm in diameter and 500-mm tall.

Yet another application involves complex assemblies, such as certain consumer electronics applications, which might present the robot a pallet of parts, and then use vision and force sensing to find the products and assemble them at all different angles.

According to FANUC, benefits of the M-3iA include the patent-pending three-axis, parallel-link wrist and portable, compact size which allows it to operate in small spaces. Use of the three-axis wrist also enables part feeding from the sides of a work zone, increasing the useable workspace. The four-axis version (single-axis wrist) moves parts at extremely high speeds; and the hollow wrist allows tooling cables to be routed internally.

The core of the robot's innovation is a combination of the mechanical configuration and the system's robot control software. On the software side, the biggest problem is enabling the robot to pick up a cookie and place it accurately at a 30-degree angle on a moving straight line conveyor. The three primary axes of the robot basically need to position the wrist so that the wrist is in the right spot while tracking the conveyor. The three wrist axes are also moving in conjunction with the primary axes to keep that 30-degree angle in a straight line. The kinematic solution implemented in the software has to be able to coordinate all six axes at extremely high speeds.

The M-3iA, like all FANUC robots, operates with the company's R-30iA controller with integrated intelligent functions such as iRVision(R), Force Sensing, Robot Link and Collision Guard. The robot controller is based on the FANUC Series 31i CNC controller, offering the same brains, power and motion algorithm computing power.

The iRVision system is a robotic vision package, available on all FANUC robots, that requires a camera and cable but no other additional processing hardware. It offers a 2-D robot guidance tool to accomplish part location, error proofing, and other operations that normally require special sensors or custom fixtures. For robotic vision processes that exceed the capability of 2-D vision systems, FANUC offers an integrated 3-D vision system.