How Augmented Reality Can Help Us Accept Autonomous Cars

Self-driving cars haven't fully earned consumers' trust yet, but augmented reality technology could be the key to easing the transition to fully autonomous vehicles.

Augmented reality (AR) is going to find its way into your car...and not just so you can drive around and cheat at Pokemon Go.

There's a lot of talk around the technology of autonomous cars, but very little is discussed around the human factors. In September Kelly Blue Book released the results of a national survey that found the majority of Americans aren't comfortable with the idea of a self-driving car, and many believe their conventional cars are far more safe than cars with any level of autonomy.

Of the survey respondents 64 % said they prefer to be in full control of a vehicle at all times with 80% saying they would want to be able to take control of their autonomous car any time they want. Another 51% of respondents said they prioritize personal control over collective safety when it comes to self-driving cars. And, while 63% of those surveyed believed roads would be safer if autonomous vehicles were standard issue, 62% of respondents (those surveyed ranged in age from 12 to 64) didn't believe they would see a world where all vehicles are fully autonomous in their lifetime.

A big challenge ahead for automakers and OEMs then will be to convince the average consumer that purchasing a self-driving car won't be an inherent safety risk. 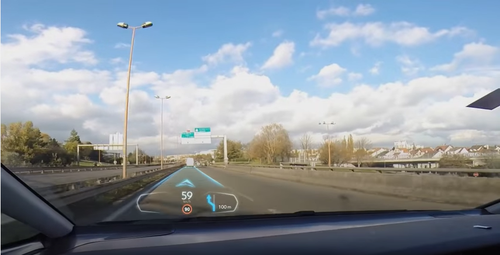 Augmented reality in heads up displays can already provide navigation and driving assist information and soon it will be able to provide information to passengers in autonomous vehicles as well.
(Image source: Groupe PSA).

ABI Research, a research and consulting firm specializing in emerging technologies, recently released a report, "Augmented and Virtual Reality in Automotive," that discusses AR technology in autos as not only a way to create more advanced and intuitive driving experience, but also to help ease consumers into the transition toward autonomous driving.

Dominique Bonte, Managing Director and Vice President, B2B, at ABI Research said that there are currently three use cases for AR in the automotive realm. The first use case, which Bonte said is ready right now, is using AR for intuitive navigation instructions - projecting 3D information into the viewing field of the driver, such as painting virtual arrows onto the road to assist with GPS navigation. "It's the next step up from heads-up displays [HUDs]," Bonte said." AR would actually open up the entire viewing field of the driver and allow for navigation information. It's about intuitive, seamless presenting of information."

The second use case is in advanced driver systems such as automated braking and driver assisting technologies seen in newer Tesla model cars. "Whenever the sensor (radar, LIDAR, ect..) is detecting something like a pedestrian or car, the AR HUD can highlight that emergency situation by painting a halo around the obstacle," Bonte explained. From there the vehicle's adaptive steering and automatic braking could kick in while providing some context for the action to the driver. Or the driver could step in and take action on his own. A number of car companies including Ford, Hyundai, PSA, and Faraday Future are already exploring the use of AR HUDs in vehicles.

PSA Peugeot Citroën, for example, has released a video demonstrating its own AR HUD:

For ABI, autonomous cars are an emerging but very promising use case for AR. A recent fatal Tesla crash gathered a slew of media coverage and has prompted automakers to address autonomous car crashes as an inevitability rather than a possibility. "There's a lot of discussion around would it have been possible to present information to the driver and warn the driver, and I think that's where augmented reality will come in," Bonte said.

ABI believes this will happen in two key ways. First, by presenting and showing system information so a driver could quickly recognize any system failures and act. Secondly, and most importantly according to Bonte, will be to visually demonstrate to the driver how the autonomous system is seeing and reacting to the real world. "You can imagine people getting into a driverless car and being very nervous and suspicious about how reliable it is," Bonte said, adding that as autos transition from manual all the way to full autonomy it will be important to keep the driver informed. "In the beginning, at least, people will want to follow what's happening. AR will show that the system is recognizing pedestrians and obstacles so passengers can see the system is able to negotiate risks and emergencies. When you present information visually the passengers will quickly gain trust in the performance and capabilities and reliability of autonomous cars."

Put Graphics to Work. Graphics technologies can give you the competitive edge. The Graphics track at ARM TechCon focuses on the latest insights into mobile GPU, GPU compute, power efficient GPU and virtual reality technologies. Only at ARM TechCon. Oct. 25-27, 2016 in Santa Clara, CA. Register here for the event, hosted by Design News’ parent company UBM.

However, Bonte cautioned that as more autos integrate AR technology manufacturers will have to be careful that AR isn't abused. If you've taken a cab recently you've likely already seen touchscreens in the backs of the seats running ads. The takeaway is clear - advertisers see passengers, sitting passively in vehicles, as a prime target.

For anyone who's spent any time browsing the Internet it shouldn't be difficult to imagine a driving experience in which your view is littered with virtual ads. Imagine if every time you drove by a restaurant you got hit with a short video commercial or a pop up letting you know about the day's specials. Or maybe you'd like to hear all about the new rewards debit card program every time you drive by a bank?

"Things like that can be dangerous, there could be information overload," Bonte said. "Mixing critical safety alerts with commercial messages might not be a good thing, but it may be hard to resist that temptation. AR should be firmly limited to the safety realm and not spread into other uses cases - only presenting relevant, contextual safety information and nothing else."

ABI didn't offer a time table to when AR might become a standard in vehicles, but Bonte said the technology has to be absolutely right. With analysts estimating a roughly 50% market penetration for self driving cars sometime in the 2030s, consumers may see an increasing sophistication in AR. "The underlying technology is extremely complex," Bonte said. "Projecting accurate 3D information in the view of the driver requires high precision and very detailed maps and sophisticated imaging software. Reaching that type of accuracy is why AR in the automotive context is taking time because it has to be absolutely accurate and it relies on a lot of under-the-hood technologies."