First Details on the BMW i Hydrogen NEXT Fuel Cell Vehicle 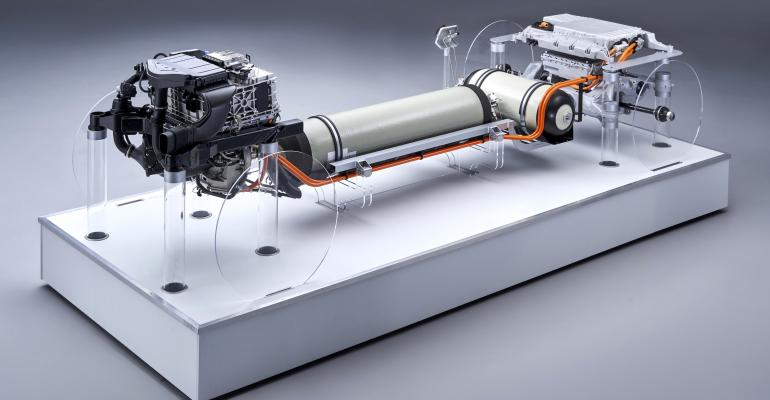 BMW is keeping the faith in fuel cell technology, with an assist from Toyota. 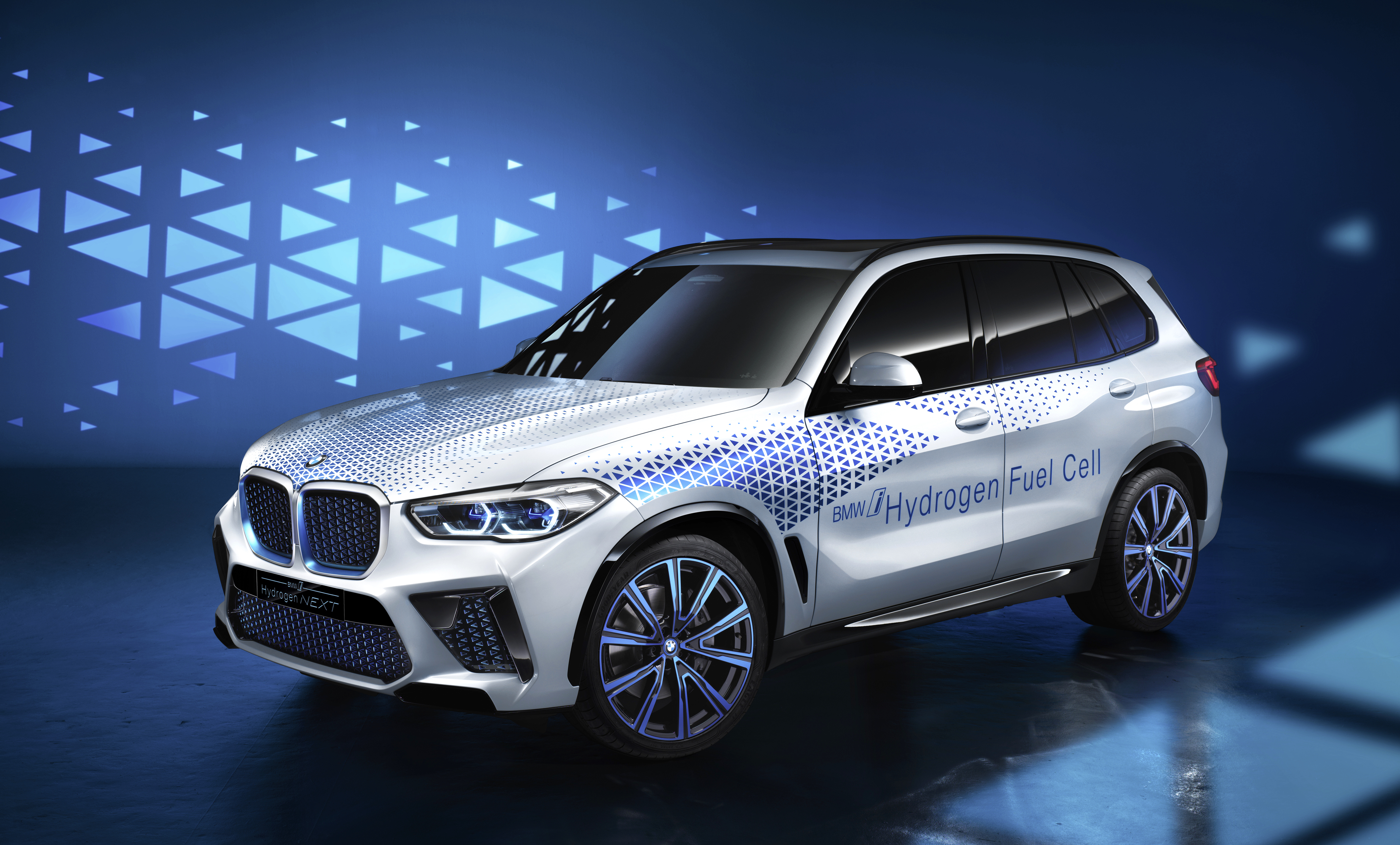 BMW is among the car manufacturers that remains bullish on the potential for hydrogen fuel cell drivetrain technology in passenger vehicles, according to Klaus Fröhlich, Member of the Board of Management of BMW AG, Research and Development. He tempers that hopefulness with the acknowledgement that serious obstacles remain and that battery electric vehicles remain the superior EV technology in the short term.

Fröhlich made his comments while releasing new technical details on BMW’s i Hydrogen NEXT concept vehicle, which the company introduced at the 2019 Frankfurt Motor Show in September. The converted X5 crossover utility vehicle carries a 170-horsepower (125 kilowatt) fuel cell that is supplemented by a small peak power battery power pack to provide a maximum of 374 hp (275 kW) when needed for acceleration to deliver the level of performance expected of a BMW.

The key advantage hydrogen fuel cells hold over batteries as an EV power source is that the 13.2 lbs. (6 kg) of hydrogen fuel can be replenished stored in the i Hydrogen NEXT’s dual 10,150 PSI (700 bar) under-floor storage tanks can be replenished in three or four minutes, according to the company. This is in contrast to the 22.5 minutes needed to recharge an 800-volt vehicle like the Porsche Taycan to an 80 percent state of charge using a 270 kW DC fast charger, which is the current state of the art for minimum charging time. 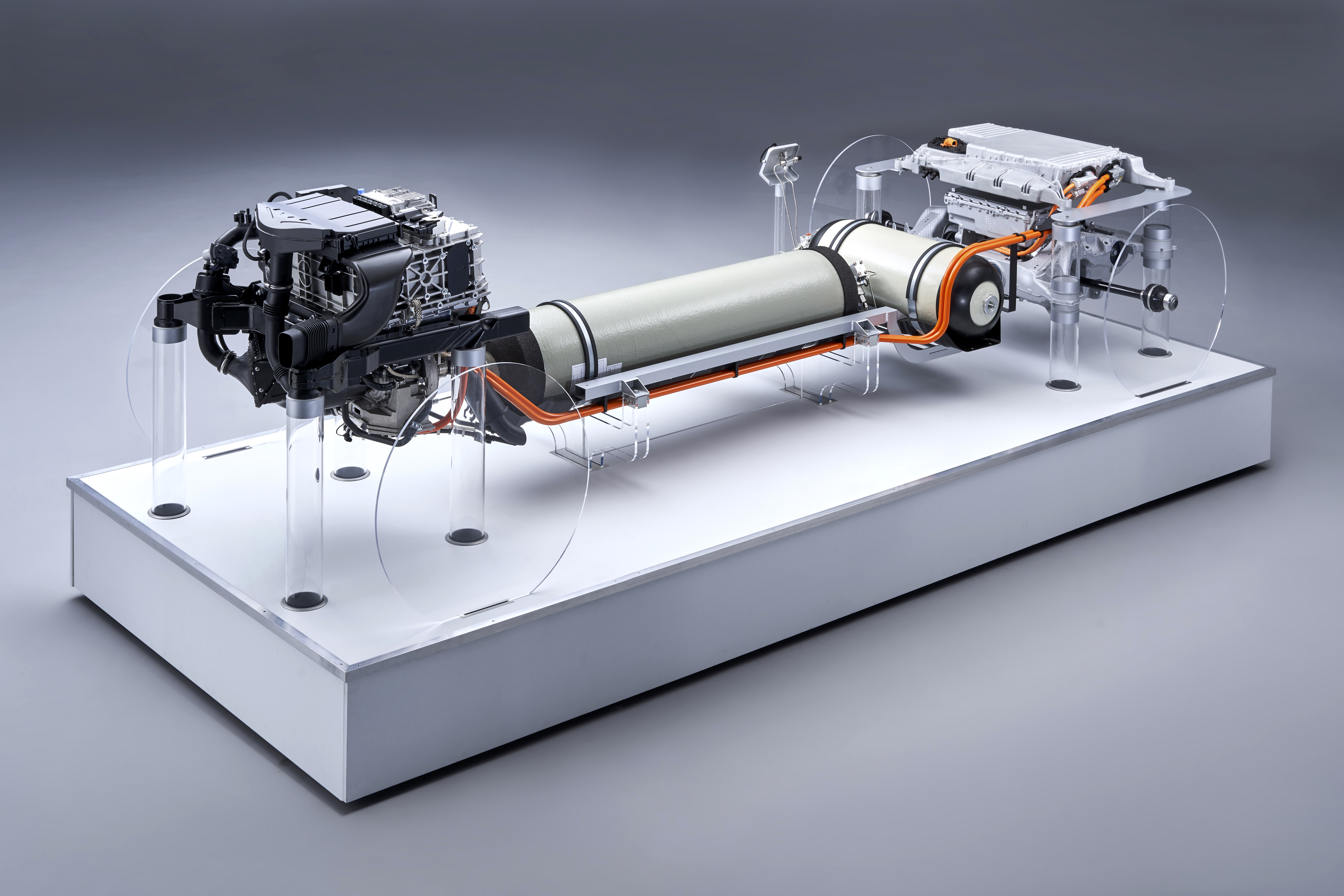 The electric motor used in the I Hydrogen NEXT is BMW’s fifth-generation eDrive unit that will debut in the iX3.

BMW is also looking to improve its hydrogen storage tanks with a flatter design that fits beneath vehicle floors more easily. The company has partnered in a three-and-a-half year research project with Munich University of Applied Sciences, Leichtbauzentrum Sachsen GmbH, the Technical University of Dresden and WELA Handelsgesellschaft mbH in this effort.

Flatter tanks would package into the space in future EVs designed to contain their batteries, letting BMW make both fuel cell and battery electric versions of the same vehicle. This will help reduce the cost of the fuel cell vehicles closer to that of battery electrics, according to BMW. 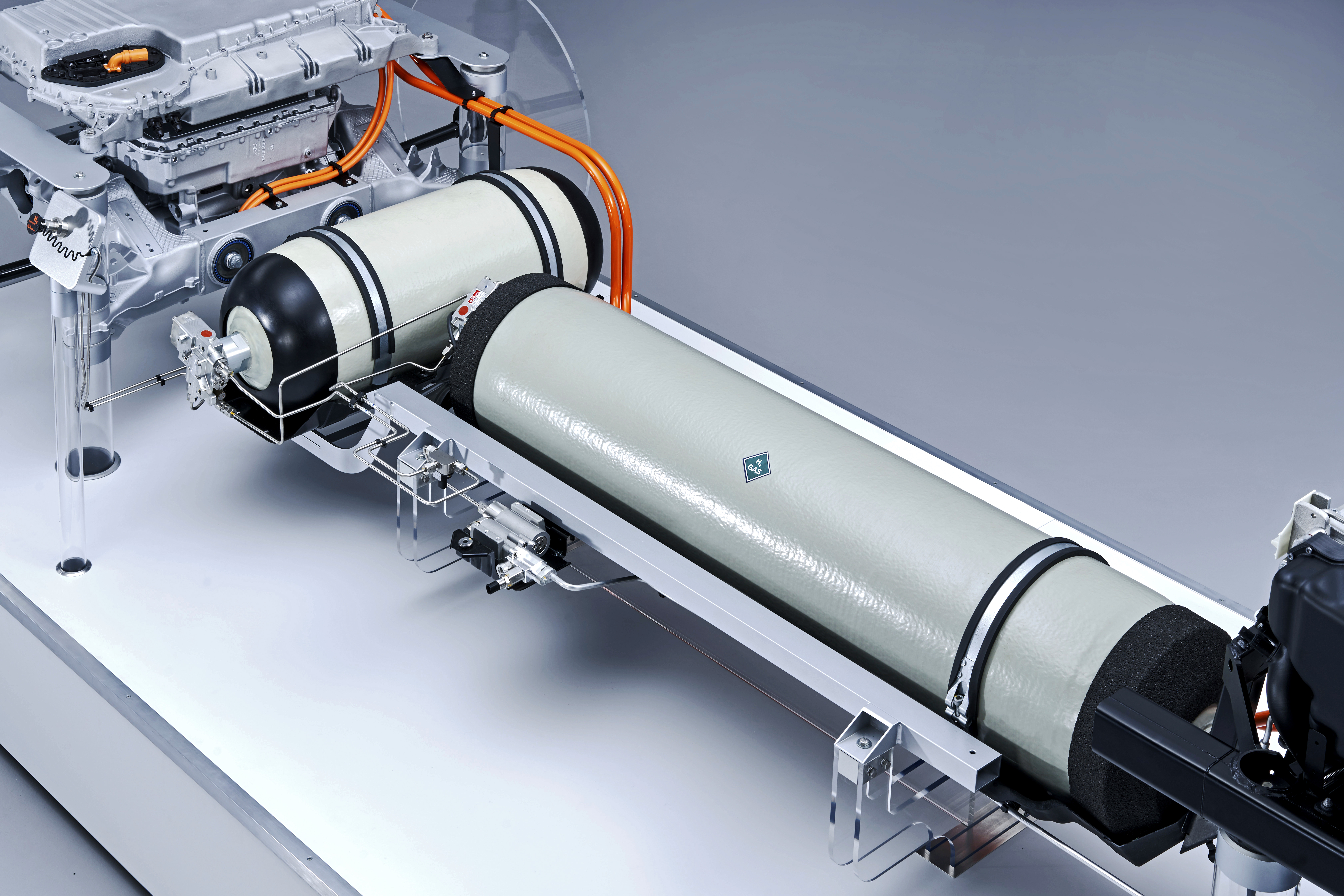 The cylindrical storage tanks in the BMW i Hydrogen NEXT concept. Image source: BMW Group AG

It is important for manufacturers to be able to produce both kinds of electrics, said Fröhlich. “We expect different powertrains to continue to coexist for a long time to come,” he said. “We see hydrogen electric drive as holding long-term potential for our larger models, which is why we are continuing to work together with Toyota on the development of the technology.”

For now, however, there are factors holding back fuel cells from achieving their potential, Fröhlich said. “Currently, the right conditions are not yet in place to offer BMW customers a fuel cell production model. This is regarding the hydrogen refueling infrastructure and the energy system as a whole, which needs to produce green hydrogen in relevant quantities and at affordable cost to be used for individual mobility,” he explained.

That’s why battery electric vehicles are leading the way, Fröhlich explained. “Short term: We can bring green energy onto the roads faster with battery electric vehicles. Pilot it. Master it. Scale it up. This is what we have done successfully with electric mobility, which is why we are now in a position to rapidly roll out e-mobility on a large scale as the BMW Group.”

BMW’s aim is to replicate that model with fuel cells. “Further down the line we will be able to take the same approach with hydrogen technology. The next step will be to pilot the second generation of our fuel cell powertrain in a small series of the BMW i Hydrogen NEXT, starting in 2022.”

BMW is pursuing this effort in partnership with Toyota, which has put significant resources into developing its fuel cell technology. “Toyota has tremendous expertise with hydrogen fuel cells and we have decades of experience with hydrogen powertrains,” noted Fröhlich.

He went on to tout BMW’s own history using hydrogen in combustion engines as well as in fuel cell vehicles. “Our first research vehicle powered with hydrogen was introduced in 1979; the BMW 520h,” he said. “We developed our own first fuel cell in 1997. We started testing our first fuel cell electric vehicle in 2013.” 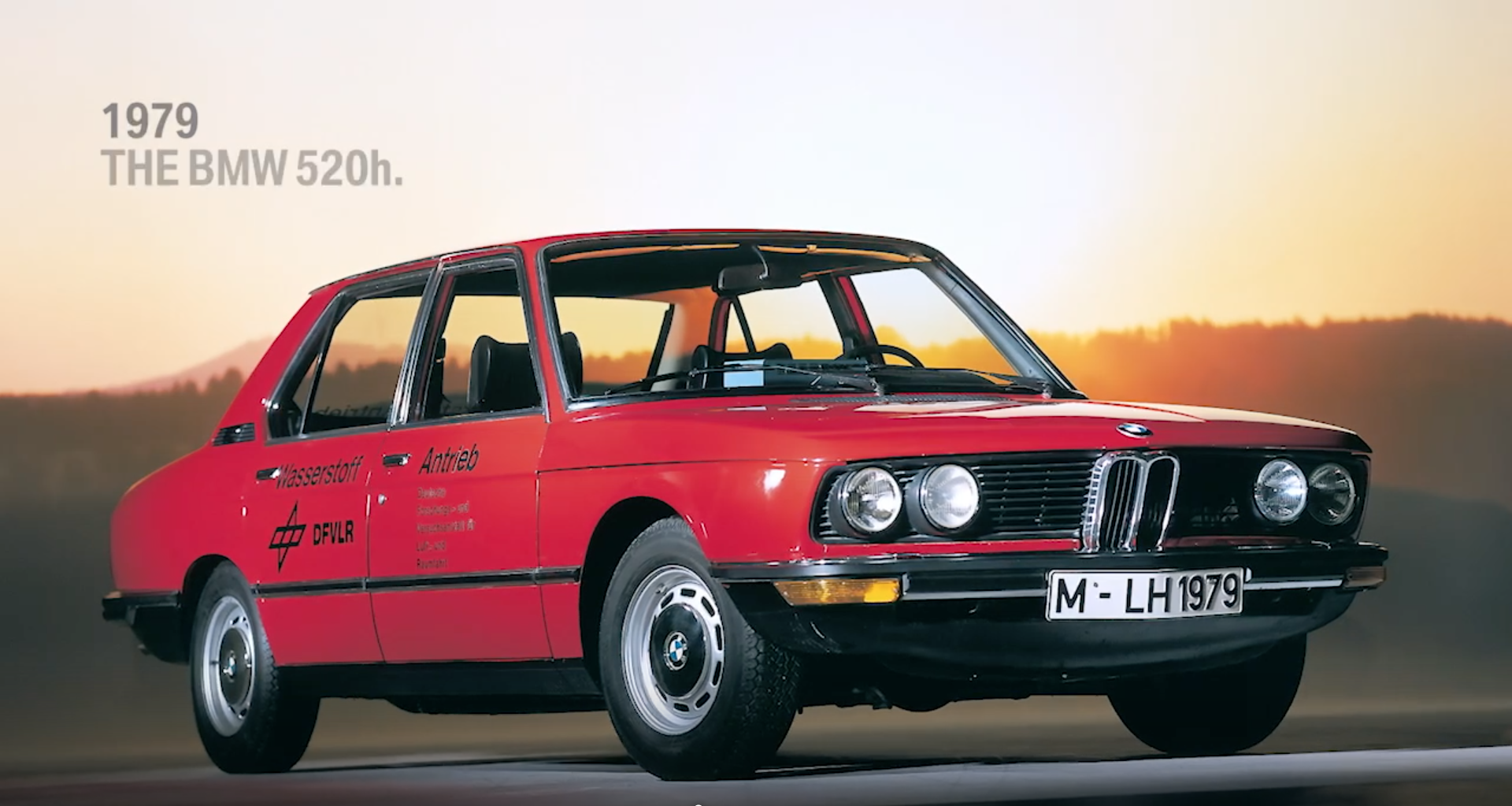 While other companies might be able to produce fuel cell vehicles that are focused on efficiency and practicality, the company that claims to build “Ultimate Driving Machine” faces tougher dynamic expectations from its cars, no matter their energy source, Fröhlich acknowledged.

“When we do offer our customers a hydrogen-powered BMW, it will generate the exhilarating driving pleasure for which BMWs are renowned,” he pledged, hinting at the likely eventual production models. “The upper-end models of our extremely popular X family would make particularly suitable candidates,” he concluded. 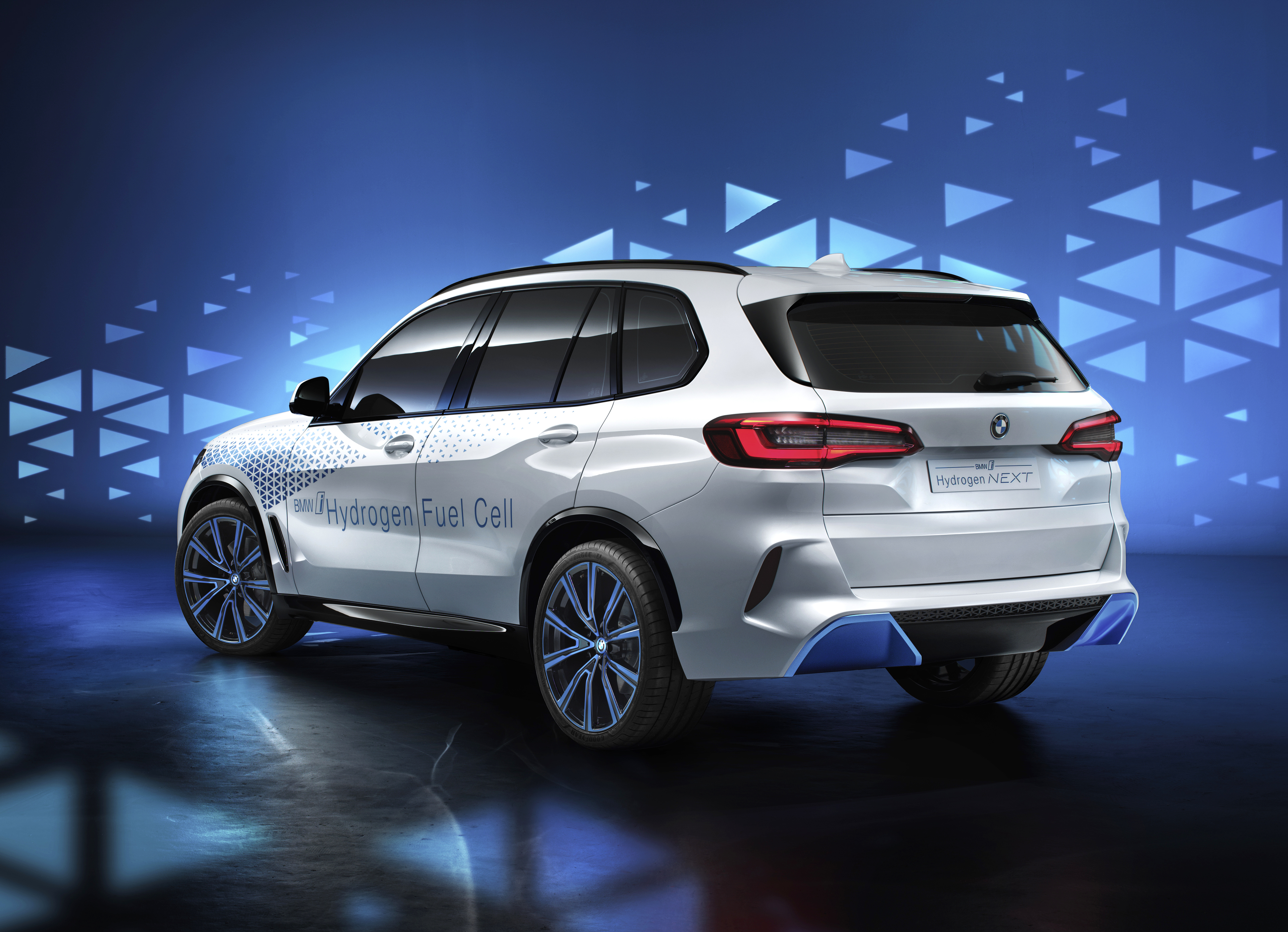