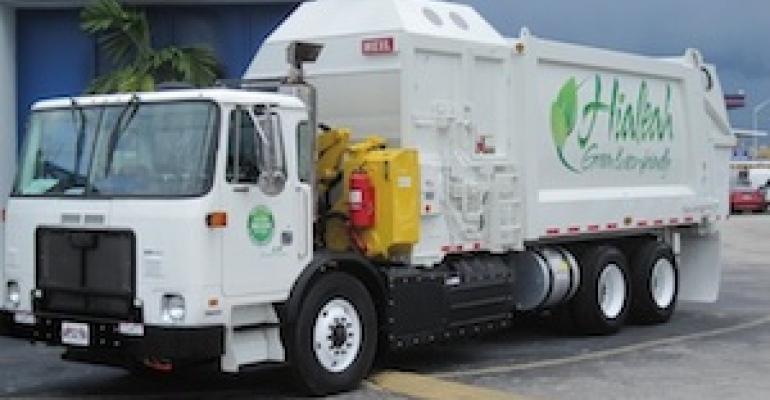 Parker's advanced series hybrid technology used in refuse truck applications is successfully moving through field and durability trials in Florida with a goal of entering serial production in June 2011. RunWise technology uses a two-speed hydrostatic drive (low speed of 0-25 and high speed from 26-45) combined with a mechanical direct drive for efficient operation at highway speeds to provide improvements in fuel consumption and emission reductions.

"We are targeting serial production for late spring, and everything is on track to accomplish that goal," says Tom DeCoster, Hydraulic Hybrids - business development manager for Parker. "We have 11 trucks operating in the Greater Miami area, specifically six units in-service at Miami Dade County, and we're averaging about 42 to 45 percent fuel savings. RunWise uptime on the field units is running between 97 to 100 percent."

Parker is focusing on fuel savings, the comparison of the actual number of gallons used by different vehicles in a given timeframe (a day, week or month) to judge overall performance. A 50 percent fuel savings is actually a 100 percent improvement in fuel economy such as miles per gallon (MPG). With every gallon of diesel that is not consumed, 22.2 lbs of CO2 is avoided along with all of the other particulate emissions that come from burning a gallon of diesel fuel.

Working with each municipality, one goal is to gather at least six months of daily data, by driver and by truck. DeCoster says they are working meticulously to get an apples-to-apples comparison, so that over the six month period they can record a comprehensive overview of the trucks and hybrid drives' performance. There are two ways to check fuel usage, either directly from the vehicle's CANbus network or measuring what fuel is put into a truck. Parker's numbers, which use data from the CANbus, are slightly different from municipality figures which rely on actual fuel pumped into the vehicle.

"What we are seeing right now is a 45 percent fuel reduction," says Danny Diaz, Division Director of Fleet Management for Miami Dade County. "With automated garbage trucks in this type of stop-and-go application, the fuel economy is typically very poor on a traditional garbage truck. The savings is significant when you look long-term with these hybrid trucks."

Diaz says it has taken time for the drivers to become acclimated to the new trucks because it is a little different in the way they are driven. It has been a process for the drivers to learn the differences in how the new truck brakes, and the drivers have benefitted from the ride along training with the Parker staff. He says the next step is getting more data from all six trucks that are going out together on their different routes.

"We have had very positive results with these pre-production units and our team is working to monitor performance and has made minor adjustments to the control strategy," says DeCoster. "We are fine tuning the system and talking to drivers, mechanics and supervisors on a continuous improvement process."

Also, for the past three years, seven trucks have also been in full-time durability testing where essentially they are running 18 hours a day, averaging 400+ stops per hour at fully loaded GVW at an independent proving track. The test track doesn't always provide the same real life operating conditions, but the two-pronged approach accumulates a large number of operational hours on durability, along with actually putting the trucks into the field.

The RunWise drive system is built around Parker's proprietary Power Drive Unit (PDU), its C24 variable displacement bent-axis hydraulic pump/motors and composite bladder accumulators designed for high power, high start-and-stop applications. An onboard controller coordinates pumps, hydrostatic motors and accumulators to power the vehicle when in hydrostatic mode during start-and-stop operation while collecting refuse. Instead of solely using power from the engine, accumulated energy from the vehicle's braking system is stored and used to power the truck each time it accelerates. As the truck reaches highway speed, the drive unit transfers operation from the hydrostatic drive operation to a mechanical drive to maximize operational efficiency.

"Our combination allows us to do some unique things using the series approach," says DeCoster. "Parker has some enabling technologies and our pumps are highly efficient in severe duty applications. We capture ~70 percent of vehicle inertia energy during braking events, and we also utilize engine management to optimize fuel utilization."

The refuse application is an extremely good application, especially with the side loader events running at between 1,000 and 1,400 picks a day. The start/stop cycle is tremendously advantageous, not only for saving fuel, but braking is done hydraulically for the majority of braking events allowing foundation brake life to be significantly extended.

"With the fuel trials, we have seen brake extensions at high as six times normal wear cycles and, in testing in other municipalities, as high as eight times," says DeCoster. "As a result, the engine is not working as hard and there are many components that don't see the same severe duty cycle as a conventional set-up."

RunWise is at a point now of working through the field trials, moving toward serial production and making subtle improvements to optimize the technology and system performance.

United Parcel Service (UPS) and Fed Ex have become the first companies to order a variation on the technology for use on delivery vehicles scheduled to be on the road in 2011. Parker is also already developing further advancements in the technology for use on an advanced bus platform that is targeting a 45 percent reduction in fuel use over average diesel power trains, and which is believed to be improved fuel reduction as promoted with hybrid-electric systems.

"This is the first ever series hydraulic hybrid technology in commercial use and this technology is the highest efficiency power train that exists," says Charles Gray, director of the EPA's Advanced Technology Division speaking during the September 2010 South Florida ceremonies to deliver the first refuse vehicles using the technology. "This technology can also produce the highest reduction in greenhouse gas emissions in these applications in urban environments of any technology we know. This is just the beginning and the future is bright for this technology."
0 comments
Hide comments
Related
You Might Like