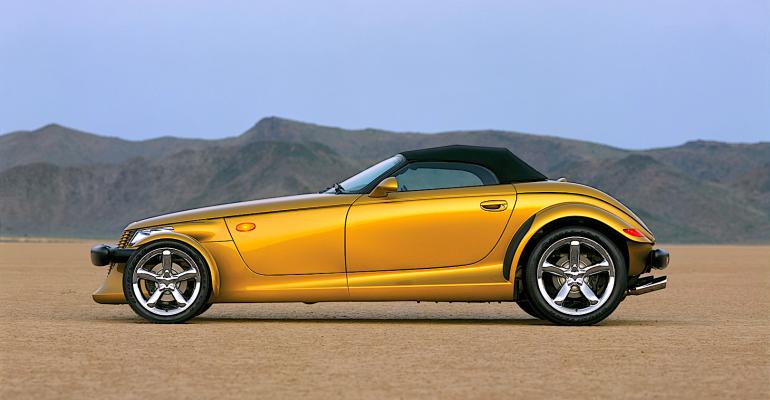 The regenerative braking of electric vehicles channels most of the car’s energy into its battery rather than dissipating it by the heat of friction from a conventional braking system. Yet brakes continue to be built with the mass and cost of systems meant to stop cars on their own.

Continental is exploring the possibility of lightweight aluminum brake components that could handle EVs’ reduced braking demands with less cost and weight than the brakes used today.

The company opened its investigation into this area with the New Wheel Concept in 2015. That project proposed a very light aluminum wheel, combined with similarly lightweight aluminum brake caliper and even the brake rotor. The New Wheel Concept evolved into the company’s new projects, which are the Bionic lightweight caliper, which is proposed to also use an aluminum rotor, and the Intelligent Hydraulic Drum Brake with Lightweight Composite Drum.

In the case of the drum, “composite” doesn’t refer to a plastic or carbon fiber material, but to a combination of both aluminum and iron. This trims about 30 percent of the mass from the brake drum, compared to a conventional all-iron brake drum, according to Continental. 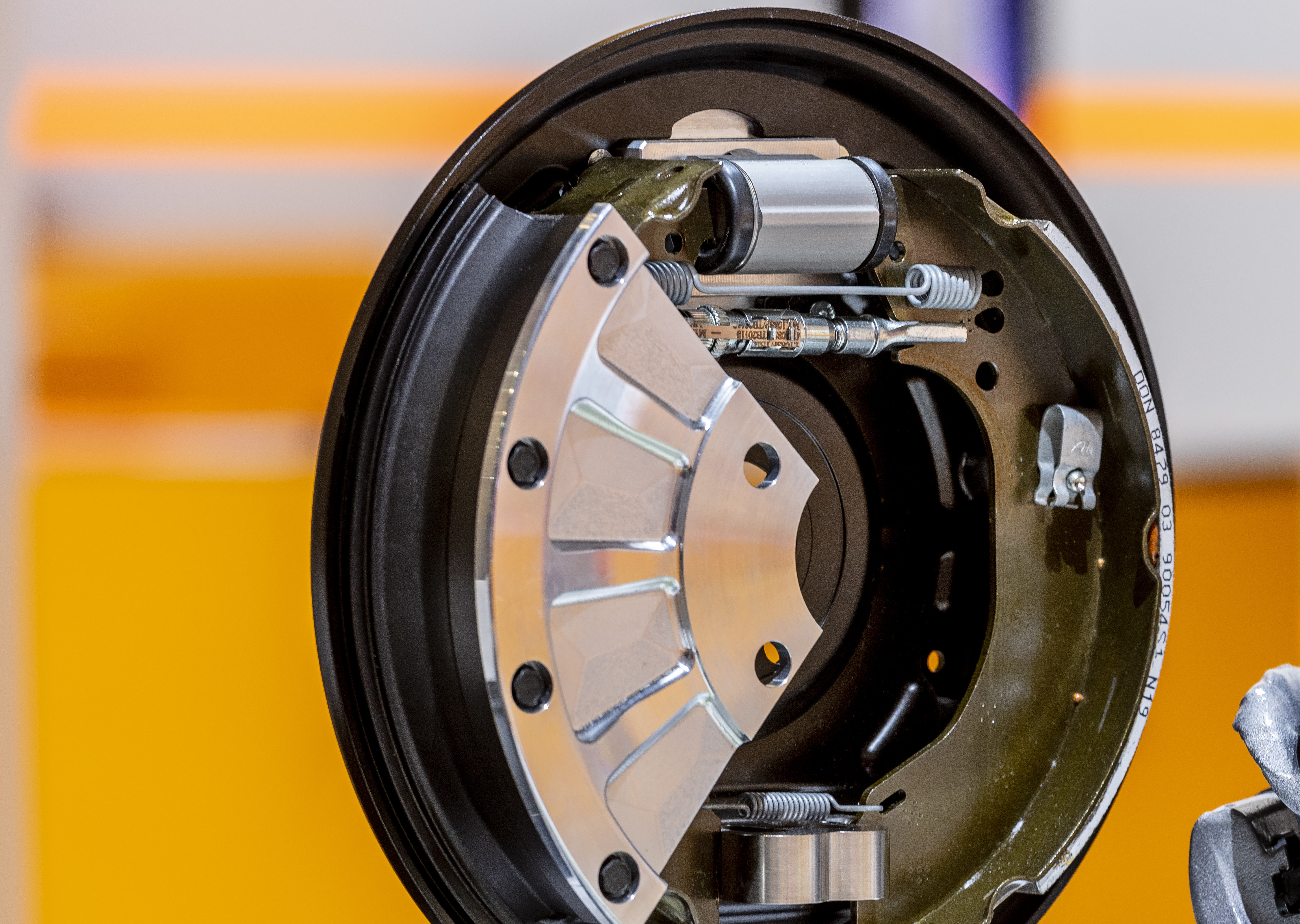 While disc brakes offer better performance, the reduced demands of EVs’ brakes, especially on the rear axle, make the lower cost and reduced drag of drum brakes appealing. The Continental concept system includes internal sensors for measuring brake torque for smooth coordination of the friction brakes with the EV’s regenerative braking. The company proposes it in sizes ranging from 10 inches to 14 inches in diameter.

It may be a challenge to overcome possible bias against drum brakes as an obsolete design. “This is, I don’t know, medieval technology?” joked Benedikt Grudda, communications manager for Continental’s Hydraulic Brake Systems business unit. “It perfectly fits the needs for electric vehicles,” he declared, more seriously.

That’s because of EVs’ reduced braking demands and the reduced friction from dragging brakes in drum systems. While Grudda acknowledged the benefit of reduced drag, it is not something he could quantify. “I would say yes, it definitely reduced drag a significant amount, but I could not quantify it.”

That reduced drag also contributes to prolonged life of the brake material, so that Continental is touting its concept brake system as durable enough to last the expected vehicle lifetime without maintenance, he added. 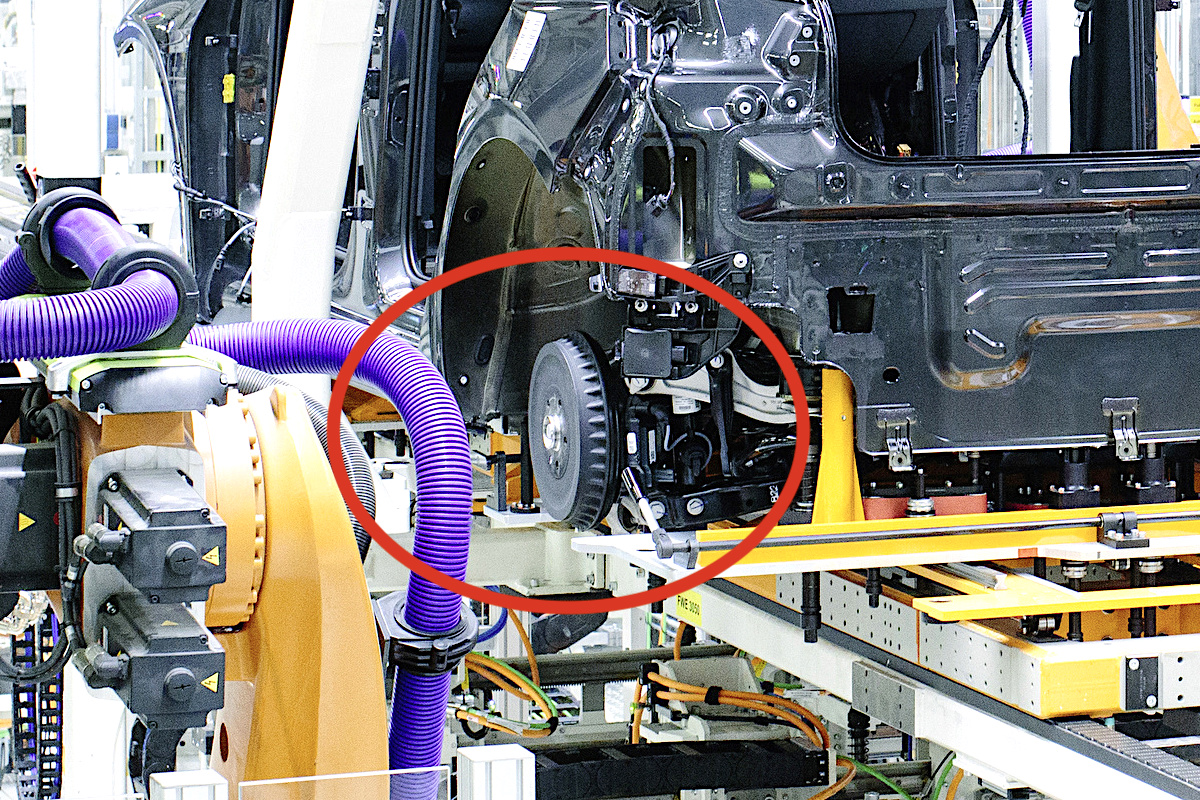 Another advantage of drum brakes is that the drum seals the braking components inside. When the enclosing drum is aluminum, there is no rust or corrosion to detract from the vehicle’s appearance. Continental already has a customer for this system, as Volkswagen has shown its ID.3 EV using the Continental aluminum composite drum brake system on its rear wheels.

Composite aluminum/iron brake rotors are not a new thing. The Alfin brakes employed by the 1955 Mercedes-Benz SLR used a combination of iron and aluminum in the drums. That was a very different arrangement, as those brakes were designed for the maximum possible performance of the day.

They were on all four wheels, not just the rear, and the huge drums had external cooling fins to help dissipate the heat generated in competition. Those brakes were also mounted inboard, acting on the front wheels via halfshafts like we’d normally see powering the wheels of a front-drive car. 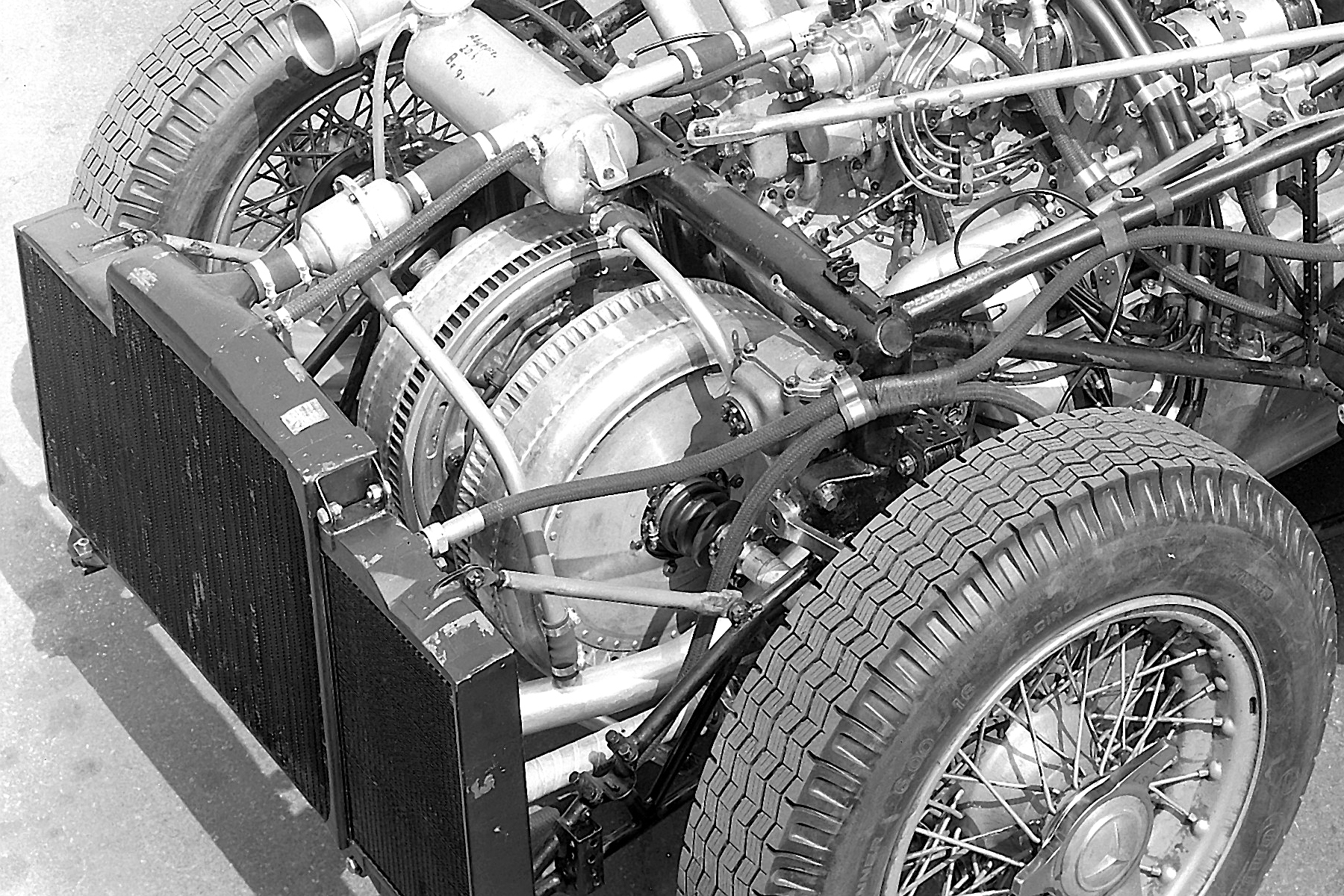 For performance applications, drum brakes were soon supplanted by the disc brakes that debuted on Mercedes’ rival Jaguar’s C-Type at the 24 Hours of Le Mans in 1953. But their low cost and low drag have kept drums competitive as a rear brake through the decades. Now, EVs could prolong the life of this “medieval” technology further.

Obviously, Continental has ideas for tailoring disc brakes to the lighter demands of EVs too. Specifically, the company has developed a minimalist brake caliper that eliminates all superfluous material to shave weight to the bare minimum.

The challenge when doing that is that while most routine EV braking may be relatively light and handled by the regenerative braking system, there is still a requirement for abrupt emergency stops, said Grudda.

In these situations, a brake caliper that has had too much material removed will deform from the application of high pressure and torque. “What if you are driving a vehicle and kid in front of you kicks the football into the street,” he asked. “For emergency brake function, you need a certain kind of stiffness in the caliper. You cannot downsize it that much.” 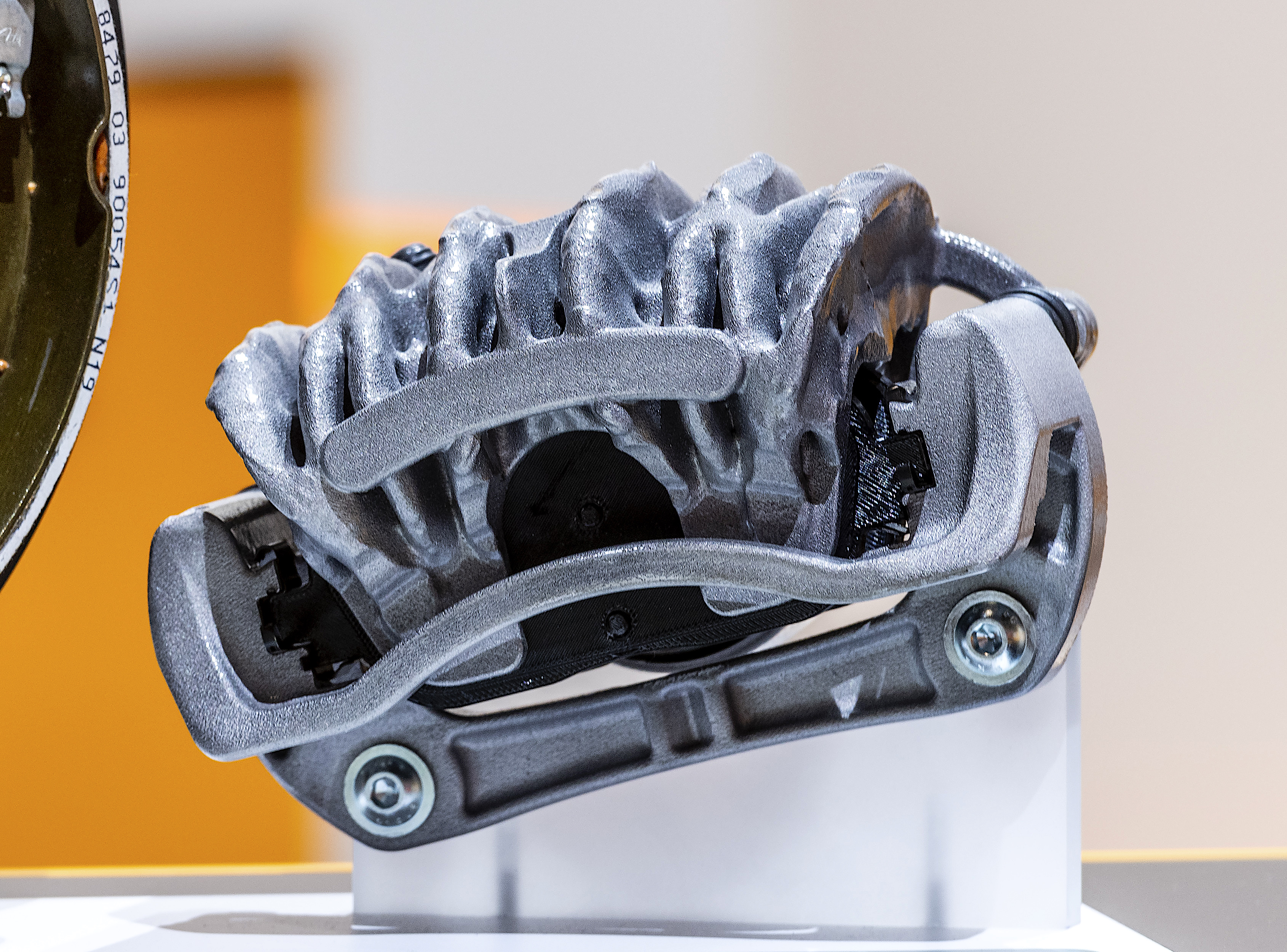 Continental used computer design to determine exactly where reinforcing material was needed and where it wasn’t and 3-D printed the result. “We were taking out everything that was not relevant to guarantee this stiffness,” he said. “The result looks like the bone structure in your torso, so we call it ‘Bionic.’” This minimized brake caliper squeezes an aluminum 11.3-inch rotor, which also saves weight.

There are very good reasons why aluminum hasn’t been used for rotors, reports Aluminum Transportation Group brake expert Doug Richman. Richman worked on what was probably the world’s only production aluminum brake rotor program for the 1998 Plymouth Prowler boutique car.

That car featured aluminum-intensive construction, so the team sought to extend aluminum use to include the brakes. Only the rear brake used the aluminum rotors for the Prowler, and Chrysler only provided cast iron replacement rotors for the cars, Richman said. “We learned quite a lot on this program,” he recalled. “The Chrysler people tried hard to make this their innovation technology. But it is not as simple as it looks.”

Chrysler countered that by enlarging the rotor to 13 inches. This made the rear rotors larger than the iron ones on the Prowler’s front wheels, which was a unique situation. Doing so helped, but the conductivity of the heat through the less-massive aluminum had the effect of cooking the grease out of the car’s rear wheel bearings.

Hot aluminum loses its strength, Richman added. At the 260-degree C temperatures experienced by the Prowler’s rear brakes, the aluminum material lost half its strength, which led to fastening bolts loosening over time. 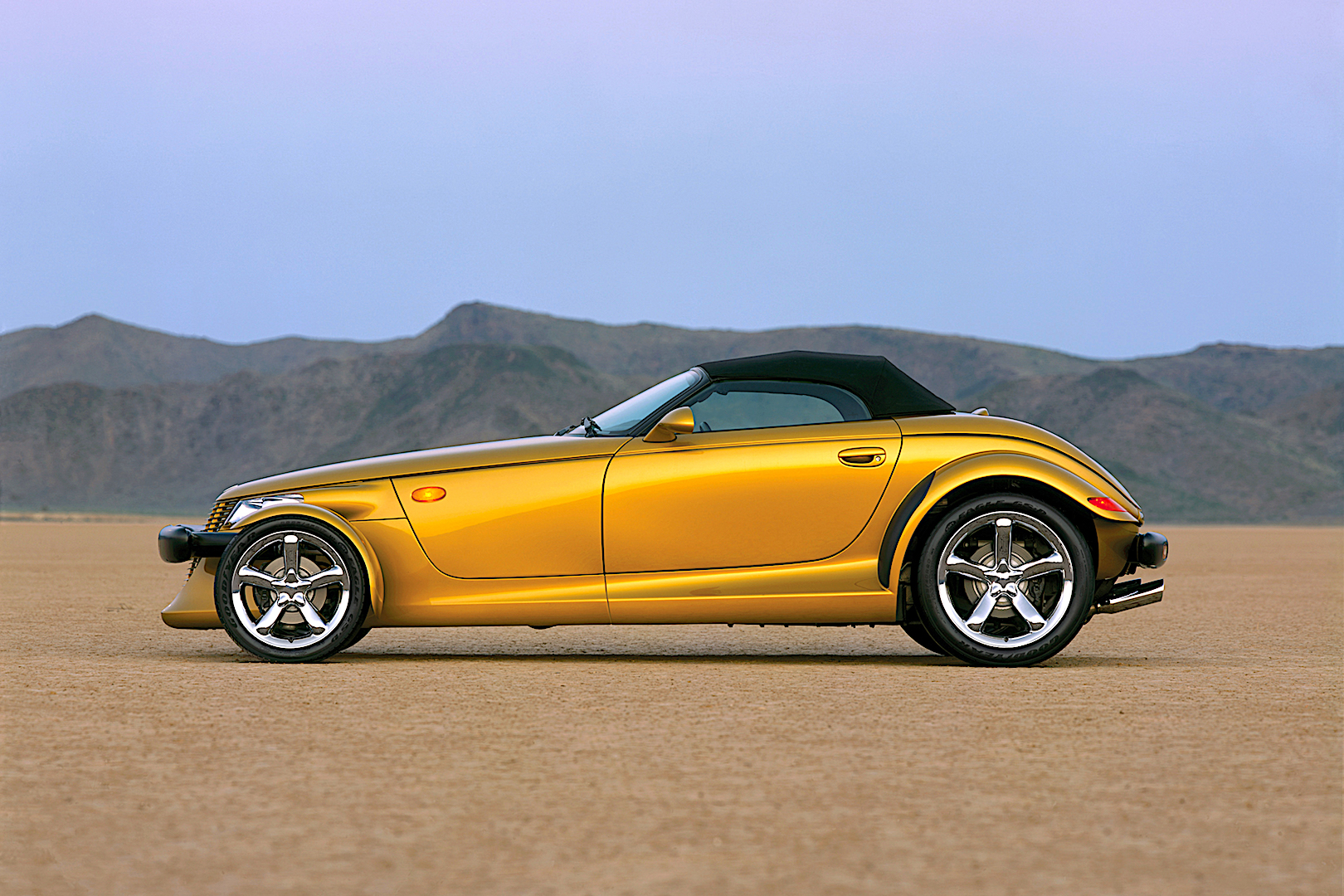 In an EV, the regeneration should take most of the load off the friction brakes, potentially making aluminum rotors more viable. But to absorb that energy, the vehicle’s battery has to have the capacity to take it. While we normally consider a 100 percent battery charge an ideal state for our smartphones and EVs, it is disastrous from a braking perspective because the car can’t absorb brake energy into an already-full battery.

Braking tests have to account for all possible scenarios, including a long descent down a mountain with a fully charged battery. The hill at Jennerstown, Penn. is the standard for brake testing, according to Richman. Vehicles have to go miles downhill without losing brake effectiveness, he said.

That is also Continental’s expectation, said Grudda. Mountain testing showed brake temperatures of 720 degrees C without regeneration and only 20 degrees C with it. “You see a huge difference in disc temperature,” he exclaimed. To address the possibility of the regeneration being unavailable, EVs could be programmed to avoid reaching that state, so they’d always have the ability to dump energy into their battery, Grudda suggested.

Continental’s concept for the lightweight brake systems is for subcompact city cars, which are unlikely to find themselves atop a mountain. “Something we are currently discussing and thinking about is, ‘What should be the requirements for an electric vehicle, especially one that drives in the city?’” he said.

“We currently simulate a situation where you drive down a hill at 100 kph and push the brake ten times in a row. Will you ever, ever have this situation in a small urban vehicle?” Considering the lower demands of urban vehicles, perhaps their requirements should be reduced, he suggested. “If you have reduced requirements you can make it lighter, make is smaller, more ecologically and economically efficient and cheaper.”

As regulators come to recognize the varying demands placed on different vehicles, “I believe there will be more varying requirements for different types of vehicles,” said Grudda.

“This is something to be discussed with the automotive manufacturers and also a topic for discussion with the general public,” he said. “I personally do love this topic. Because it is interesting and I do think it will change mobility in a positive way.”