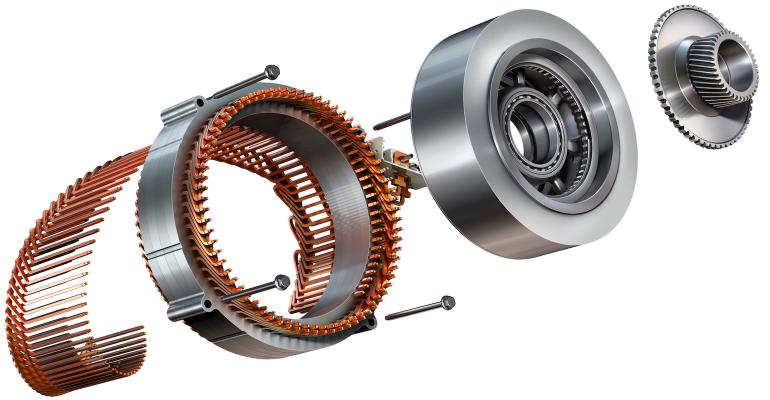 The Chevrolet Volt's electric motor is an example of a permanent magnet EV motor.
Sending electricity to the EV's motor in pulses rather than continuously is the trick.

San Jose, California’s Tula Technology, Inc. established itself with the development of Dynamic Skip Fire, a technology that lets engines switch individual cylinders off and on while the engine is running to save fuel when power from all cylinders isn’t needed.

Now, the company is turning heads with a technology that brings that concept to electric motors in EVs. Dynamic Motor Drive (DMD) software sends power to the electric motor in metered pulses rather than in a continuous stream, helping the motor do its job with as little power as possible.

Tula’s combustion engine partners, General Motors and Cummins, have proved the benefit of Dynamic Skip Fire for saving gasoline and diesel, respectively, so the company has credibility when it says that it can make EVs save energy.

A key potential benefit of DMD is that it can help make permanent magnet-free reluctance motors more viable options for EV manufacturers. This is important as carmakers seek ways to eliminate the use of the rare-earth metals employed in those motors’ magnets.

With magnets or without, Tula can boost the efficiency of electric motors by pushing them into their most efficient operating zone. “As the rotor goes around the fields in the stator, in medium loads and speeds, that’s when the efficiency is highest,” noted Tula senior vice president of engineering John Fuerst. “Whenever you are asking a lot or a little of an e machine, things get worse.” 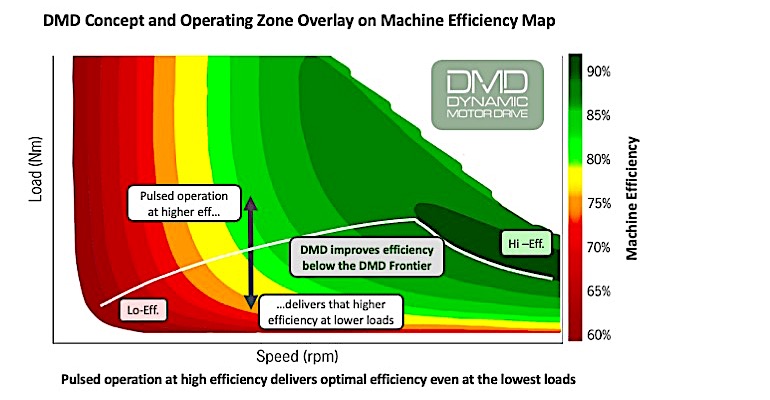 At light loads, DMD pulses the power flow to the motor, forcing it to work harder when the power is switched on so that it is running in its more efficient medium-load condition. “In an automotive application e-machines are spending time at speeds meaningfully below their peak efficiency,” said Fuerst. The resulting loss of efficiency is about 20 percent, he added.

“That 20 percent loss is DMD’s opportunity,” Fuerst pointed out. “At very high torque levels where you’re pushing the machine pretty hard, you don’t get DMD benefit. The entire swath across the bottom of the load/speed map, from zero speed to top speed, there’s a pretty nice swath of lower torque.”

Tula’s technology can recover about half of the lost efficiency or about ten percent of the low-torque energy consumption. That is only a portion of the total operating condition, however, so the average benefit comes to between 2 and 3 percent.

Magnet-free reluctance motors aren’t as efficient as the current type with their rare-earth metals. DMD can help those motors bridge the gap, however, so the technology is seen as a potential aid for carmakers eyeing reluctance motors as a way to eliminate rare earths in their electric motors.

DMD-aided reluctance motors will still fall short of permanent magnet motors but by a narrower margin. Fuerst says he estimates eliminating those magnets will shave nearly $1,000 in cost from those motors. “We’re going to save on cost but we’re going to give up a couple points of efficiency.”

Some cars compete in markets where efficiency and driving range are crucial, so they will not be suitable for DMD-controlled permanent magnet-free reluctance motors. But for those where cost is a bigger concern than absolute range, there is an opportunity, Fuerst said.

Additionally, supply chain disruptions have illustrated the extra vulnerability each additional material or component adds to a product, so simplifying can reduce exposure to such disruptions.

If those recent supply chain pains have added motivation for carmakers to install Tula’s software, then the industry might be able to meet the company’s hoped-for target date for production. While Dynamic Skip Fire took four or five years to reach production because of the need to integrate the control software with ignition, fuel, and valve-control hardware, DMD’s software-only solution should happen faster, Fuerst said. “It feels more like 2-3 years. We’re thinking about ’24. Maybe earlier.”