Opinion: How Toyota’s EVs May Save the Company 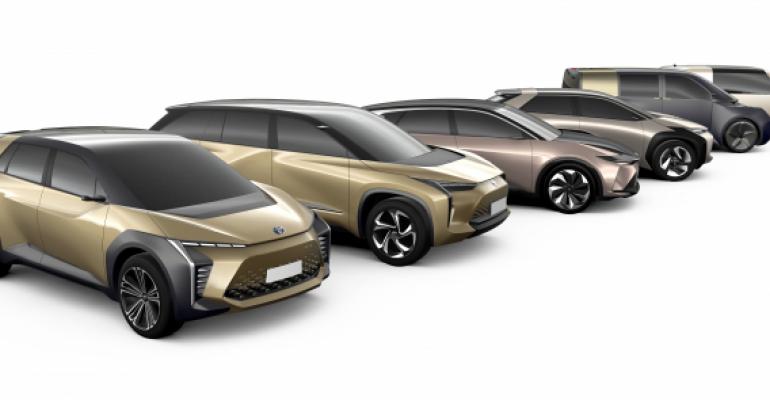 Toyota has finally committed to building a range of electric vehicles (EVs)—but is it too late?

Citing a “sudden surge” in electric vehicle (EV) popularity, Toyota Executive Vice President and head of R&D, Shigeki Terashi, announced the company’s new EV development plans to sell 5.5 million traditional gasoline-electric hybrids, plug-in hybrids, EVs and hydrogen fuel cell vehicles by 2025. This is five years earlier than the 2030 deadline that had been announced in 2017. "Progress has surpassed the target," Terashi said. "We have entered a new age." The R&D chief made his remarks on an hour-long company online broadcast on June 7.

Late to the Game

Some might say it’s about time. After having introduced the gasoline-electric Prius hybrid in 1997, Toyota has steadfastly placed its bets on hybrid designs, and more recently hydrogen fuel cells. While these technologies use electric motors for propulsion, giving the company engineering experience in part of the EV equation, the electricity to power those motors comes from sources other than batteries. It turns out that building battery packs that are robust, safe, and that can store significant energy is quite a challenge and Toyota has also announced it will work with Chinese battery giant CATL to provide some of its battery systems.

That Toyota is accelerating its EV development plans makes sense—stringent exhaust emission regulations and the prospects of outright bans of fossil fuel vehicles in Europe and China are forcing the company into the move. Unlike most other carmakers who have already gone into production with joint-venture partners to build EVs in China for the Chinese market, Toyota will only begin making battery electrics for that market in 2020. Toyota has partnerships with Chinese companies GAC and FWA to build vehicles in China and each company will produce its own version of the Toyota battery electric. Toyota plans to release at least 10 battery-only electric vehicles worldwide by the early 2020s.

Playing Well With Others

Earlier in the same week, Toyota announced an agreement with Subaru to jointly develop a battery electric platform that would work for both midsize and large vehicles, and that would be used for a jointly developed crossover EV. Each brand will sell that vehicle separately, beginning with the US market as its main target.

"To respond with a sense of speed to the diversifying needs of these markets and to multiple challenges, both Subaru and Toyota believe that it is necessary to pursue a business model that goes beyond convention, crossing over industrial boundaries together with various types of other entities that share their aspirations," Toyota said in a statement. "As a first step in this direction, the two companies will jointly develop a BEV-dedicated platform. The platform will be developed in a way that will make it broadly applicable to multiple vehicle types, including C-segment-class and D-segment-class sedans and SUVs, as well as to efficient development of derivative vehicle models."

Toyota is also working with Suzuki and Daihatsu to develop compact EVs for the Asian and world markets.

To build a range of vehicles, Toyota will use its e-TNGA, an EV version of the company's new-generation Toyota New Global Architecture modular platform. The new platform will provide six vehicle variations in all, including a large SUV, a medium SUV, a medium crossover, a medium minivan, a medium sedan and the compact.

Despite appearing to arrive late to the EV game, Toyota might just have an ace up its sleeve. Present commercial lithium ion batteries employ a liquid electrolyte that allows the transfer of lithium ions between the positive (cathode) and negative (anode) electrodes. This liquid consists of organic solvents that are flammable and also don’t prevent the formation of spikey dendritic crystals of lithium when charged under the wrong conditions.

The Holy Grail of battery technology is the replacement of that liquid electrolyte with a solid ceramic or polymer material. In theory such solid-state batteries will be more powerful and less prone to fires. Toyota has been working on this technology for several years and claims to be nearly ready to unveil a solid-state battery with a polymer electrolyte—perhaps ahead of the 2020 Summer Olympic Games in Tokyo. "If possible, by the time we have the Olympic Games next year, we would like to make sure that a solid-state battery can be unveiled to the public," Terashi said.

Too Little, Or Genius Marketing?

So, is Toyota finally getting serious about building battery-powered electric vehicles? For China, Asia, and parts of Europe, the types of small urban EVs that company has shown will find ready markets that are already filled with established competition. EV sales in the US, already lackluster, have shown a softening throughout the first part of this year. The majority of EVs available in the US are small sedans—exactly the kind of vehicles that US buyers are abandoning.

For the US market, with its emphasis on pickup trucks, SUVs and cross over utilities, the real danger is that the EV venture with Subaru might be insufficient to establish any sort of beachhead for Toyota. This will be particularly true in the next couple years with new electric pickup trucks from Rivian, Ford and GM, along with Tesla’s new electric pickup truck and Roadster sports car sucking up all of the EV media attention. Add in new offerings from Audi, Volkswagen, Porsche, and just about every other carmaker with a pulse, and until and unless the company produces a range of EVs for the US, Toyota’s battle looks to be mostly uphill. At least the first EV from the Toyota/Subaru combo will be a crossover…that should help.

The stakes are high—and not just in building vehicles. Toyota is looking at a future mobility business that includes sales, leasing, ride-sharing, transportation as a service, used car sales, battery reuse, and recycling. "Once those become viable, he BEV business will become viable, even if the battery price remains quite high," Terashi said. "Unless we work on this at a very accelerated manner, we will not be able to ensure our future survival."