GM Engineer Traded Driving the Lane for Cars that Drive Themselves 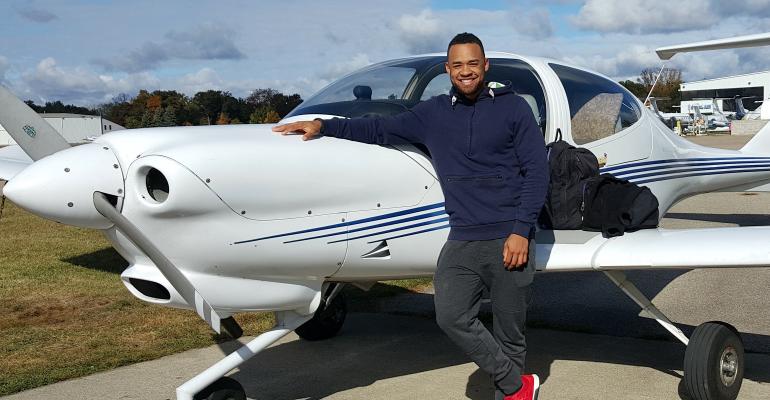 While Charles Muse always liked to take things apart to see how they worked, he also excelled at sports, and that paved the way toward his current job working on future autonomous vehicles at General Motors (GM).

The assistant program engineering manager for autonomous and electric vehicles was a bat boy for the Chicago White Sox while growing up on Chicago’s south side. But it was basketball that got him into a private prep high school where he was able to take STEM classes that intrigued him, especially after a trip to an aviation camp.

The first step to building a better future, is imagining one. RT if you know a kid who is going to change the world some day. pic.twitter.com/58iuJqWhYd

Basketball also took Muse to The Ohio State University, where he was the only African American to graduate in his class of aerospace engineers. While a career in the aviation industry seems like the obvious destination for an aerospace engineer, an internship at GM working at the proving grounds rekindled the interest that had led him to customize the Dodge Nitro that Muse drove in college.

“You show up every day and give it 110 percent,” he said. “I was doing something I loved.”

He joined the company in 2011 doing aerodynamic work on GM's crossover SUVs. Tall, boxy SUVs presented a real engineering headache for someone tasked with minimizing their drag. “We pretty much had car drag requirements for SUVs. The bread and butter of what we do are crossovers and aero is a huge part.”

Applying some of the obvious solutions wouldn’t be aesthetically acceptable to SUV customers, which limited Muse’s options. “The car still had to be sexy. But they were tall and boxy and all the things that screamed ‘anti aero,” he said. “You can’t slam it to the ground and make it look like a Prius.”

Muse’s reward for finding solutions to those problems was to be assigned to run GM’s wind tunnel program. The problem was that GM’s wind tunnel was closed to be upgraded to a rolling road tunnel with a moving ground plane, so Muse had to decamp to Georgia to oversee work using Lockheed Martin’s tunnel in Atlanta.

That meant hiring a team to move with him, a chore that was complicated by the need for all employees to have a security clearance because the tunnel is located at Dobbins Air Reserve Base.

Then, the Lockheed Martin wind tunnel data system didn’t speak General Motors’ language, so he had to write code to convert the defense/aerospace data to GM’s protocol. While we have all had to learn new work-from-home practices, “work from Georgia” presented huge challenges.

The clay styling models that are normally wheeled from the studio to the tunnel at GM now had to be shipped south. And that had to be climate-controlled transport, because the clay model needed to look the same when it got there as when it left, and not like a drooping Salvador Dali-inspired version of it.

Along the way, Muse has helped parents with their home-bound kids by contributing to GM’s STEM Online Learning YouTube video series, mentoring aspiring journalists in the Discover the Unexpected scholarship program, and speaking to youth mentorship programs.

Succeeding in these challenges has gotten Muse promoted to his current job, where he is responsible for the development, validation, and service of fully autonomous vehicles for GM’s Cruise Origin project and managing a multimillion-dollar budget to do it.

Muse credits his successes with his recognition at an early age that it is more important for his team to succeed than for him to achieve individual success. “I think a lot it goes back to my time playing basketball,” he said. “You can go out and drop 30 (points) but if you lost, it doesn’t matter.”

He also reports that he has not experienced any obvious roadblocks to achievement along the way. “I don’t think I’ve experienced being discriminated against,” he says. “Everybody has their prejudices,” Muse acknowledges. “I try to establish rapport with everybody.”