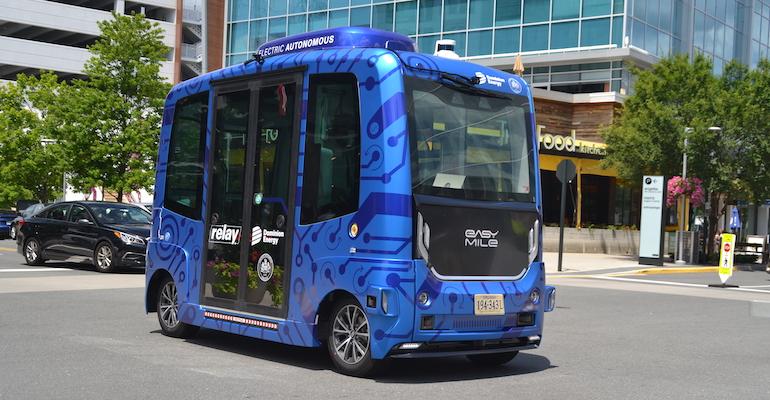 While autonomous shuttles have seen widespread service in closed campus settings, (such as the Beep shuttle at Florida’s Lake Nona innovation center) a new service in Virginia is putting an Easy Mile EZ10 shuttle on public roads between a station for the Washington Metro subway and the Mosiac shopping district in Fairfax.

The EZ10, which carries six seated passengers and six more standing, goes only 12 mph and has to cross a wide intersection with U.S. Rt. 29. The highway is six lanes wide at this location, and the slow-moving shuttle could have difficulty completing the crossing before cross-traffic has a green light, so the shuttle carries vehicle-to-infrastructure communications to let it delay the changing of the light until it is clear of the intersection.

The shuttle service, called Relay, is underwritten by the Commonwealth of Virginia, Fairfax County and the electric power utility Dominion Energy, so passengers ride free. Easy Mile deployment engineer Dionysi Damaskopoulos identifies the ability to control the traffic signal as the Relay shuttle’s main innovation. He also points out that, as a third-generation edition of the Easy Mile EZ10, Relay’s shuttle features upgraded GPS, lidar, odometer and inertial measurement unit that position the vehicle more accurately on the road than earlier models.

The first-gen EZ10 inaugurated service in 2015 and Easy Mile has them rolling at 200 locations worldwide now. Over the last five years, the diminutive shuttles have accumulated 375,000 accident-free miles of autonomous driving experience. The company draws its name from the so-called “last mile” of transit service, getting a user to and from a train, subway or bus line to or from their destination.

Connecting the Mosiac shopping district with the nearby Metro line was Fairfax County’s motivation in underwriting the Relay, reported Fairfax department of transportation director Tom Biesiadny. “That ‘last mile’ connection is really important to make transit work, to make transit attractive to people,” he said. “This shuttle extends our transit system and it provides new technology, something we have tried here in Fairfax before.”

Dominion Energy sees the program as a step toward the electrification of transportation. “It gives us the ability, if we can electrify transportation, to substantially reduce carbon emissions in the United States,” explained Dominion Energy chief innovation officer Mark Webb. “The benefits will mean reduced vehicular emissions, less traffic on the roads, smarter vehicles, and this will lead, we believe, to increased use of public transportation, which is a benefit to all of us.” 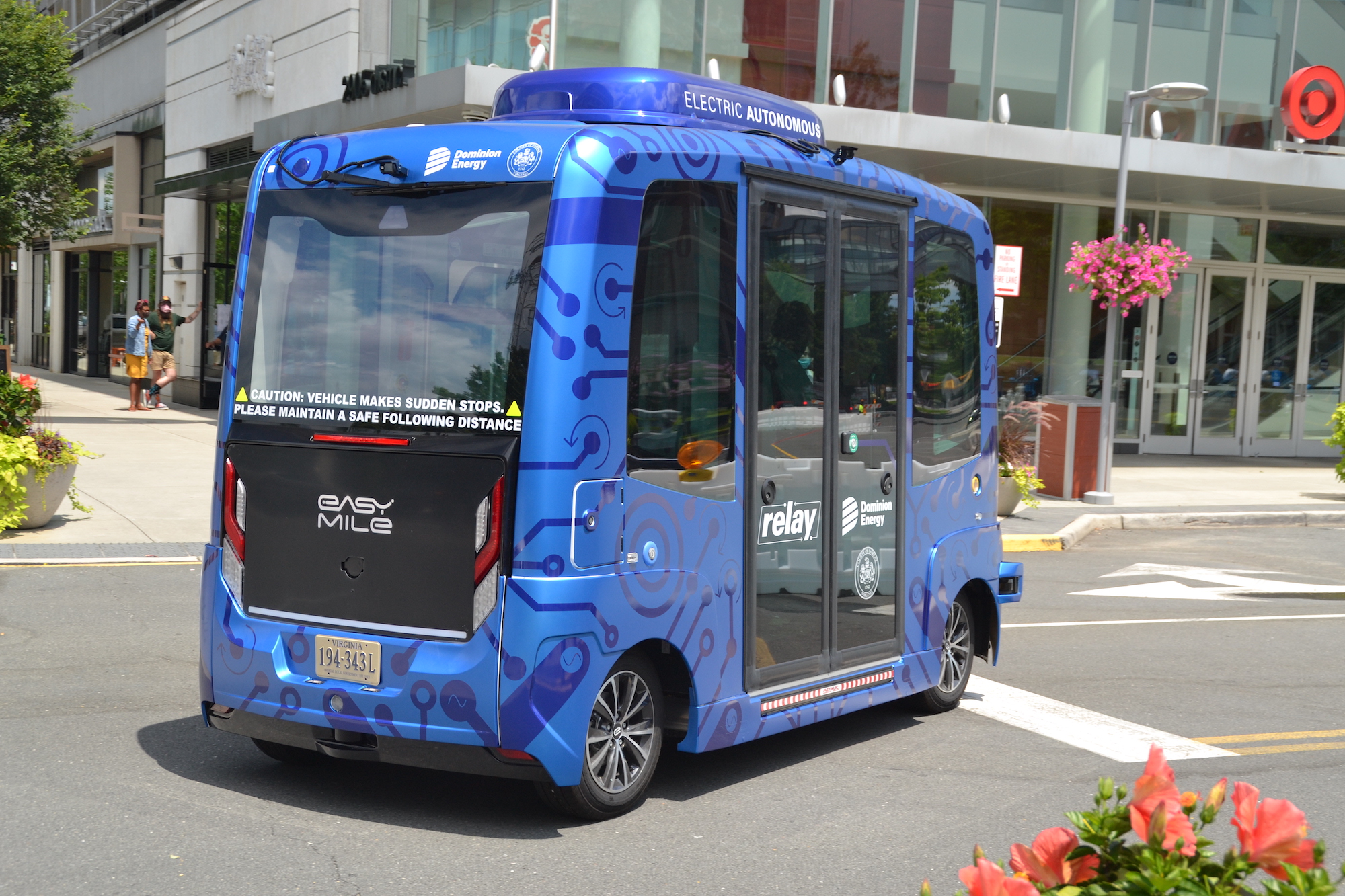 The EZ10 employs a 31 kilowatt-hour LiFePo4 battery pack that provides as much as 16 hours of operating time and recharges in six hours. “In operations, it has a pre-defined path,” explained Damaskopoulos. “It is going to use surrounding elements and previous memory to make sure it can maintain its location down to four- or five-millimeter accuracy.”

To achieve this degree of accuracy, the EZ10 maps its course though repetition before it begins passenger service, a tedious process conducted at 2.5 mph. “It is just like learning to walk,” said Damaskopoulos, “you need to start slow and pick the pace up over time. In the very beginning stages this will go quite slowly. We need to map out the environment. We need to make sure it gets a good picture of the surrounding space. From there, we’ll store that in memory. Then we begin refining the trajectory and where it goes over time. We want to make sure we fine-tune turns, approach to the stations and lane placement as well.” 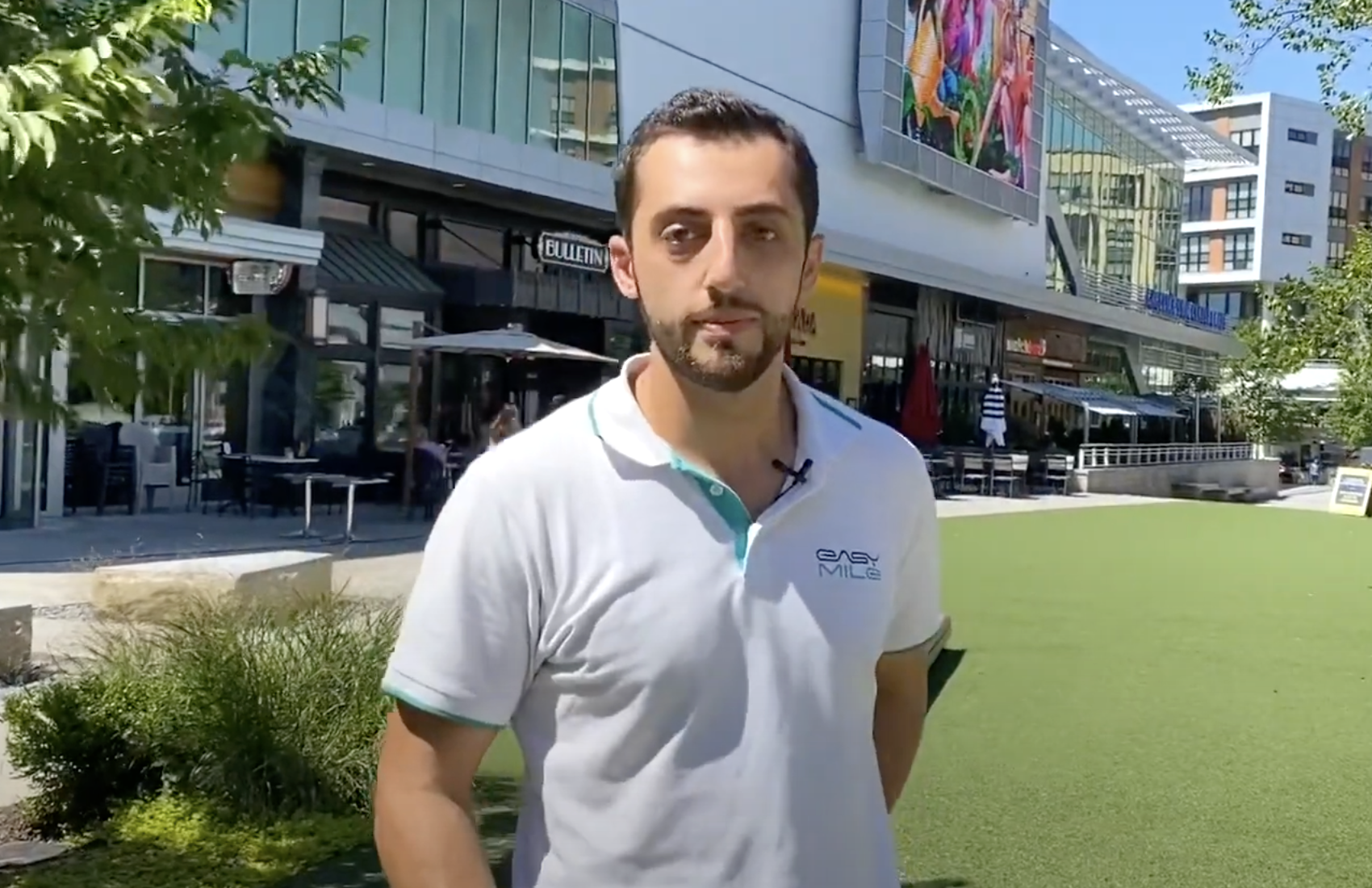 Once in operation, the EZ10 sticks to its program. “Think of it as a virtual rail, like a train or something like that,” he said. “It will only stay on that pre-defined map.”