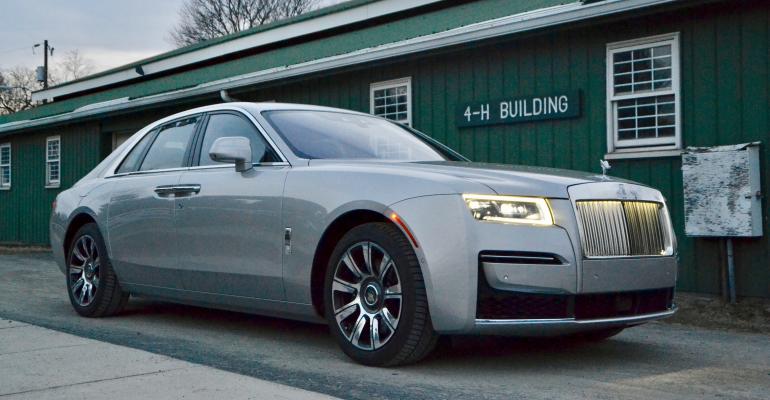 Start Slideshow ›
2021 Rolls-Royce Ghost in Premium Silver.
Rolls-Royce is targeting younger customers who drive for themselves in the fabulous 2021 Ghost.

The essence of wealth is changing, and with it, the design of products catering to wealthy buyers. So when Rolls-Royce redesigned the Ghost, it re-engineered the car to specifically address the desires of customers who aren’t necessarily being chauffeured to Wall Street, like the elderly brothers who were Eddie Murphy’s benefactor/antagonists in “Trading Places.”

“In 2009, when we introduced the first 'Goodwood' Ghost, we were responding to the requirements of a new and highly influential subset of our clients: entrepreneurs, founders, and successful business leaders,” recalled Torsten Müller-Ötvös, Chief Executive, Rolls-Royce Motor Cars.

Analysts are seeing the same thing. “The rich Millennial tech employee in Austin is now the archetype,” J.D. Power vice president of analytics Tyson Jominy told CNN for an article on the explosion in sales of expensive cars.

“They told us that they were seeking a different kind of a Rolls-Royce, a less ostentatious, simpler Rolls-Royce,” Müller-Ötvös continued. “Which they could use as a business tool and for personal self-driving enjoyment.”

But 2009 was a long time ago in car years, so Rolls-Royce launched a development project for a new Ghost that would improve on the outgoing model. “Five years ago, we began an open dialog with our closest Ghost clients and we learned a great deal. Within this particular layer of our clients, they expressed a desire for something even more refined, even less ostentatious. A car with a minimalist design ethic. Simple and distilled, but still, in every respect, a true Rolls-Royce.”

The challenge, then, was to develop the necessary engineering advances to deliver this experience, despite the sometimes-conflicting requirements for both driver involvement and passenger isolation.

“Our challenge with Ghost was to distill the dynamic highlight from the complete portfolio of motorcars into one single product,” explained Jonathan Simms, Rolls-Royce engineering lead. “This wouldn’t have been possible without our Rolls-Royce space frame architecture.”

“In terms of the dynamic properties of new Ghost, we also responded directly to client feedback,” he continued. “Not only did they want to use their Ghost in more places, but they also wanted to spend more time behind the wheel to really experience our 563 horsepower twin-turbo V12.”

That isn’t to say that Rolls-Royce strayed from its comfort-first philosophy of providing the company’s signature Magic Carpet ride isolation.

“We created, with our front suspension, a world first,” boasted Simms. “We introduced a new system which in simple terms, dampens the dampers to remove as much energy transfer as we can from the road into the body of the vehicle, creating for the customer the sense that the road has almost been planed smooth in front of them.”

Design News had the good fortune to experience the fruit of these efforts and we can happily confirm the seemingly physics-defying results. Our tested 2021 Ghost had a base price of $332,500, but of course, there is no such thing as a base Rolls-Royce. The test car’s bottom line was $460,350, with the addition of items like the “GHOST” option package of lambswool floormats, rear theater seating, blue contrast stitching and piping for the leather upholstery, monogrammed head restraints, and an illuminated grille that may challenge the notion of understatement.

The Premier Silver paint adds $12,275, the Rolls-Royce Bespoke Audio sound system is $10,575, and LEDs that illuminate the Spirit of Ecstasy hood ornament on her pedestal add $4,800. But there is no extra charge for the Ghost’s Starlight Headliner, which is a true shock and awe experience for passengers who aren’t expecting to see a nighttime sky recreated with 1,600 fiber optic stars in the headliner.

While your guests are still gawking at the headliner, asking how many stars there are, and how it is made, they get a second shock when a simulated meteorite streaks across the Ghost’s virtual sky.

This, and the power-operated doors (rear-hinged “suicide” doors in the rear) underscore the unique nature of a Rolls-Royce in comparison to other four-wheeled conveyances that will deliver occupants to their destination with similar reliability.

In the event of inclement weather when the Ghosts pulls up to the valet stand, the car includes its own umbrellas in each rear door. Rest assured, as soon as engineers at the company’s Goodwood, England headquarters devise a way to control the climate outside the car as well as inside, they will provide that amenity. Until then we have Rolls-Royce umbrellas that at least announce your mode of transport when entering the destination.

In the recent past, driving a Rolls-Royce yourself was something of a curiosity, and it showed in the experience. The ultra-light steering and thin-rimmed, large-diameter steering wheel recalled a ship’s helm, and the cars’ dynamic response was similarly nautical, as they heeled over in response to request to changes of direction and oscillated buoyantly over bumps.

In contrast, the Ghost’s rigid aluminum “Architecture of Luxury” chassis provides a solid platform for the car’s computer-controlled air suspension system to yield both responsive control and cushy isolation. The car uses its satellite navigation system and a forward-looking camera to spot bumps and curves, so it knows what’s coming like a Houston Astros batter hearing the banging of a trash can lid.

My neighborhood includes several speed bumps that have been installed to slow the passage of commuters who think it is a good shortcut to avoid traffic on surrounding highways. They are the bane of we residents who encounter them on our every departure from and return to home.

The speed limit is 25 mph, and in most cars, it is necessary to slow to about 15 mph when passing over the bumps. Trucks and SUVs can often take the bumps at the speed limit, but they can get bouncy when doing so.

The Rolls-Royce engineers have seemingly visited and removed the bumps for Ghost drivers. The Rolls sails over them at 25 mph with no drama and little effect on the car’s occupants. It is an impressive demonstration, seen in every drive to or from my house.

It also uses the satellite map information to control shifts of the 8-speed ZF transmission, knowing when it is climbing or descending hills or entering or exiting turns. The drivetrain sends power through all four of the Ghost’s wheels, further ensure the seamless application of thrust to the ground in all conditions.

Truth to be told, the massive 627 lb.-ft. of torque from the 6.75-liter twin-turbocharged V12 is enough that the car would be just as nice with half as many gears or driving wheels, but the goal of the Ghost’s calibration team was to create the impression of endless gears, with no perceptible evidence of gear changes as it switches inaudibly between the closely matched ratios.

The overall cabin experience, while soothing, is not inaudible. Rolls-Royce's research found that turning the car into an anechoic chamber was disorienting for occupants. Instead, they’ve tuned the resonant frequencies of components to be similar, producing an unobtrusive single note. They redesigned the seat frames to match their resonance to that of the body, for example.

The upper control arms of the front suspension are among the many very rigid parts on the Ghost. However, we are all familiar with the function of another kind of large casting: bells. To keep the suspension arms from ringing, Rolls-Royce engineers innovated the “world’s first” dampers on the upper control arm that Simms touted.

There was no equivalent to the speed bump test to verify the advantages of the suspension damper during our brief weekend visit with the Ghost, so we’re left to take their word for the benefits, which make logical sense.

Buying a car that costs nearly what we paid for the house might make less logical sense. But for young tech moguls, in Austin and elsewhere, it does make sense to buy something that is so refined and personal as a Ghost. They can thank the Rolls-Royce engineering team for creating a machine that delivers an impressive driving experience to match its rear-seat opulence.