HomeAutomationSoftware Developer Drought: Where are you in Demand?
Recent
Automation
Overcoming the Blind Spots in Hemodynamics Monitoring, Beat by Beat
May 25, 2022
Schwab Commemorates 1979 Tech Upgrade with a Custom Firebird
May 25, 2022
AAA Testing Highlights Automated Driving Failures
May 25, 2022
Top 10 Semiconductor Suppliers of 2021
May 25, 2022
POLL
Strategies to Reduce Noise and Vibrations in Vehicles
May 25, 2022
NI CEO Says Data and Testing Key to Future Technology Success
May 25, 2022
NASA Space Missions: To Infinity and Beyond
May 25, 2022
Rivian Patents Automated EV Charging Connector
May 24, 2022

Software Developer Drought: Where are you in Demand? 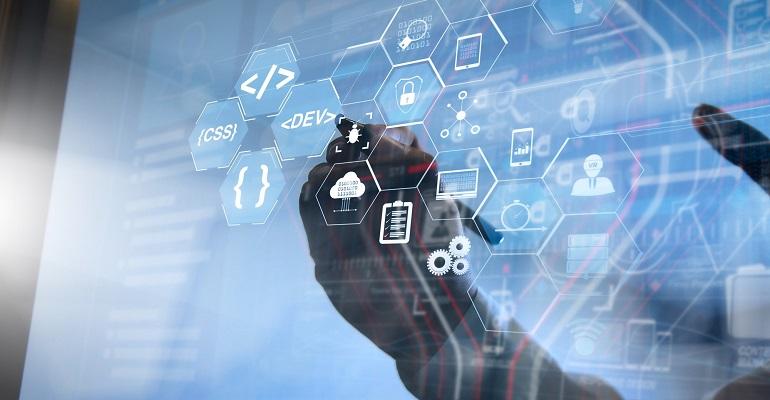 With an increasing need for software by non-tech companies, a developer drought is growing outside of Silicon Valley.

Turns out there’s a major need for software developers outside of the traditional geo-center of Silicon Valley. Despite COVID-19, states in the US heartland are actively hiring developers. Plus, professionals on the West Coast are reassessing work-life opportunities and exploring start-up prospects outside the Valley and other tech hotspots.

Eight out of 10 US counties with the highest “Developer Demand” shortage are in states in the middle of America, states such as South Dakota, Missouri, Arkansas, Illinois, Utah, and Mississippi.

This isn’t a shift to remote workers. In July and August, 92% of software developer job ads on three leading employment sites were for work-on-premises jobs. Apparently, employers are slow to embrace remote working.

The data comes from Mendix, a Siemens business involved in low-code application development. The company recently launched the Mendix 2020 Software Developer Drought Index, an effort to track hiring shortages for developers on the US county and state levels. 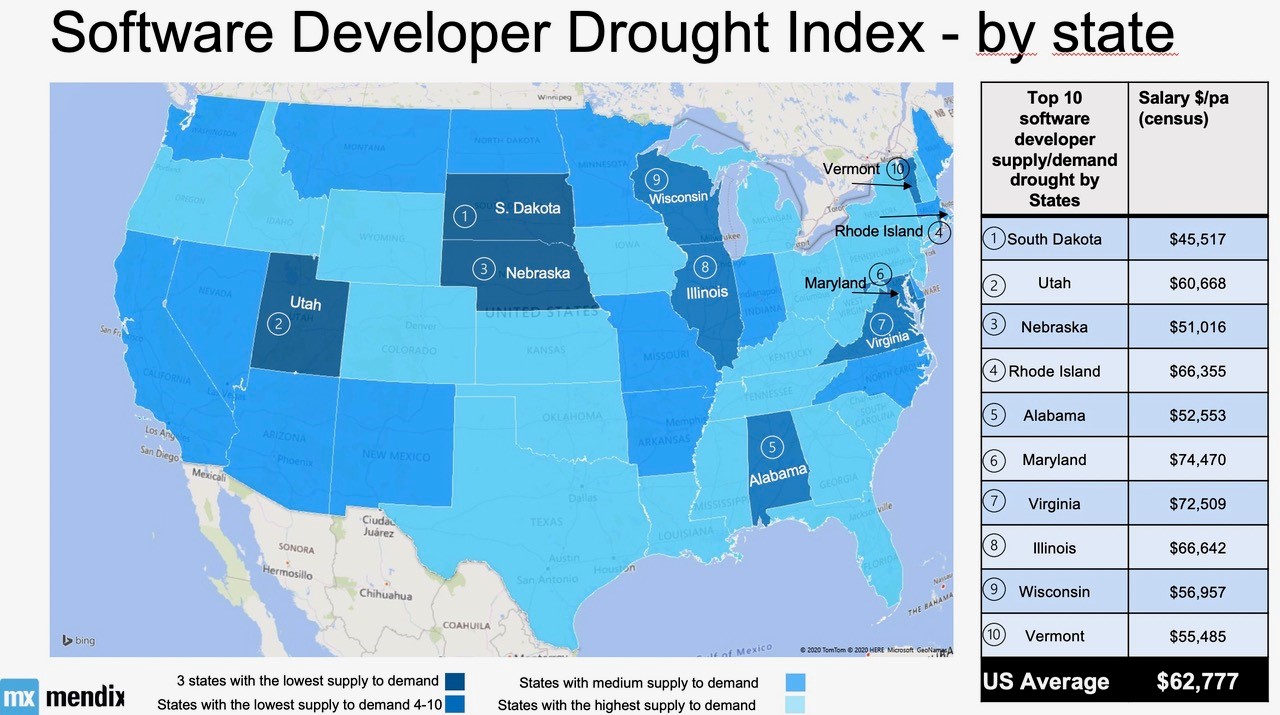 The map shows the demand for software developers outside the traditional locations of Silicon Valley and major urban centers.

Developer Jobs in the Heartland

Mendix conducted a detailed geo-analysis of over 2,000 job ads for U.S. software developers this summer. The results revealed new patterns spotlighting areas of the highest demand for software developers but with the least supply. The gap between supply and demand was most significant in middle America, with some exceptions.

These findings reveal opportunities for companies and individuals to decentralize talent away from established tech hubs using virtual teams and cloud technology. As firms move to outer locations with lower office and home rents, we might expect U.S. tech talent to relocate to these new hotspots of tech growth and start-up innovation. This coincides with a recent migration away from dense urban centers during the COVID-19 crisis, according to Mendix.

Why the Demand Outside Silicon Valley?

The demand for developers in the Heartland is not exclusively driven by Silicon Valley-based companies offering remote opportunities for developers. Mendix noted that is certainly a factor as remote work for developers has accelerated during the pandemic. Yet other forces are at work. “What we’re seeing is something different. There is a developer drought in places like Cumberland County in New Jersey; Rock Island County in Illinois; and Minnehaha County in South Dakota,” Sheryl Koenigsberg, global director of marketing at Mendix told Design News. “The demand for software developers across the country is far outpacing the supply of qualified developers, for which organizations everywhere must compete with Silicon Valley companies.”

Part of the reason for the growing demand for developers outside the Valley is that software is becoming a vital part of more and more products and systems. “Enterprises across industries recognize that they need to build software to run their businesses. Software can enable an enterprise to make its internal processes more efficient while creating new digital touchpoints to interact with partners and customers,” said Koenigsberg. “That has become more important than ever in light of COVID-19. Software development is now pivotal for all organizations – in rural, suburban, and urban areas from sea to shining sea across the US and around the world.”

Companies choose their locations for a range of reasons, from tax advantages to inexpensive real estate. Few of the heartland companies expected to need the type of talent that is associated with the coasts and major urban areas. “Companies like Coca-Cola in Atlanta, John Deere in Rock Island County, or Wells Fargo and Citi in South Dakota have numerous job opportunities posted for software developers,” said Koenigsberg. “These companies have a few options as they attempt to fill those jobs. They can try to recruit recent college grads, although their locations may not be the most appealing locales for twentysomethings.”

Other choices include training or using at-home workers. “They can retrain existing staff in software development, or they can hire developers in other locations and allow them to work remotely,” said Koenigsberg. “Or they can enable more people in their organizations to participate in software development. Those three options work better with enterprise low-code, which democratizes software development via drag-and-drop processes and by bridging the gap between business and IT.”

Koenigsberg noted that the growing developer demand spans most industries. “We think this trend is associated with companies across every industry,” said Koenigsberg. “Companies in every locale are waking up to the fact that they need to incorporate software delivery capabilities into their long-term strategic plans. Those that don’t will be unable to compete,”