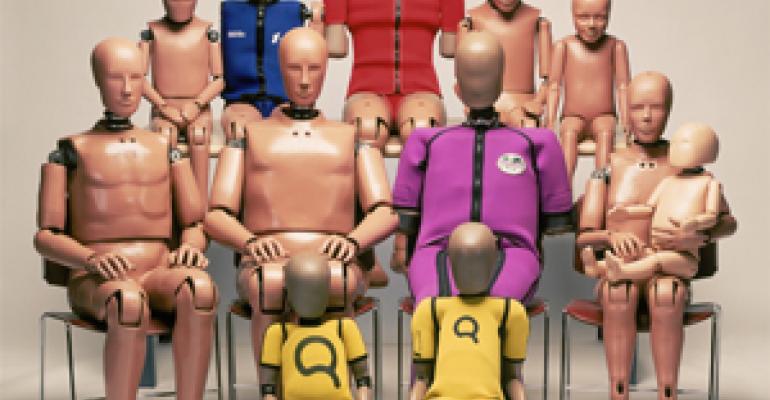 Physical crash dummies may have dozens of sensors and other sophisticated mechanical parts, but their digital brethren can be just as complicated. With more than 100,000 elements and dozens of validation tests to manage, companies delivering the complex FEA simulation models that lie at the heart of the virtual crash test dummies are starting to leverage a new type of software platform to facilitate the process.

One such company is SIMULIA, a division of Dassault Systemes that specializes in simulation software, including the Abaqus FEA program. Abaqus is used by many in the automotive industry to create virtual crash test dummy models, but SIMULIA also separately develops and qualifies its own virtual crash test dummy models, including versions of the BioRID (Biofidelic Rear Impact Dummy) and WorldSID (Worldwide Side Impact Dummy). To streamline the time and effort involved in creating, validating and updating the virtual models, a SIMULIA team now employs the company's own Simulation Lifecycle Management (SLM) platform to automate the process and ease the data management burden. As a result, SIMULIA has been able to cut back the time it takes to validate the virtual crash dummies from four weeks to as little as four days.

Deploying SLM to promote simulation reuse, aid in the onerous data-management burden and, ultimately, shorten the development and validation cycle couldn't come at a better time. Virtual crash test dummies are in high demand as leading automotive OEMs increasingly transform their vehicle development programs to embrace the digital world, using 3-D CAD and simulation tools to model and test vehicle designs virtually as opposed to building costly physical prototypes. The cost of building and crashing a prototype vehicle is high enough, but the physical crash test dummies, which come in a variety of true-to-life human dimensions and are made of myriad materials, including custom-molded urethane and vinyl, are expensive in their own right, often commanding a price tag of more than $200,000 per dummy. The reason? The physical dummies are highly complex, loaded up with sensors, and equipped with ribs, spines, necks, heads and limbs so they can respond to impact in ways that are realistic to how a human body might respond.

To ensure the validity of any kind of safety testing, the virtual dummies have to consistently mimic the behavior of the physical crash test dummies and produce data that correlates well to the physical crash test results. To do so in any highly consistent and repeatable manner requires standardization of FEA models, ensuring that each virtual dummy exhibits predictable responses to crash impact loads and accelerations. A typical FEA dummy model will have about 100,000 elements, 150,000 nodes and 500,000 degrees of freedom. To ensure there are comparable results between this extensive virtual dummy and its physical counterpart, the SIMULIA engineers have to run component, sub-assembly and full-model tests of each dummy model, which generates a huge amount of data and outputs for comparison. For instance, the team might run a sub-assembly test to assess the stresses on a full rib cage model hit from the side by a pendulum, while also doing a full-body test of an entire dummy model to see what happens when it's hit from the side by a virtual "solid" barrier.

On top of this, there's another layer that complicates the data-management challenge. Each time a new version of the physical crash test dummy is introduced or a new version of the crash simulation software is released, vendors have to go through a lengthy qualification process to ensure that same level of consistency is retained. Traditionally, this has been a labor-intensive process for a SIMULIA team, which had to manually run simulations for the 30 to 60 tests in both the current and previous versions of the Abaqus software. Teams also had to run post-processing steps to generate the curve plots describing the analysis results, as well as generate statistical comparisons to ensure the same variables were in agreement between the different versions of Abaqus. "It used to be a horrible, labor-intensive, poorly managed process, (and with SLM), it's now a highly automated, highly managed process with a lot of collaboration," Lalor says.

SLM, which serves as both a central repository for the simulation data and as a process controller, allows the SIMULIA engineers to save and manage their simulation data, reuse simulations, retain performance metrics and protect their intellectual property. The Isight software within SIMULIA also allows them to automate much of the simulation processes - another key factor in reducing the overall validation cycle times, Lalor explains. Specifically, Isight enabled the team to create a workflow that let them launch all of the Abaqus analysis tasks on a compute cluster as well as another workflow that helped determine the correlation between results from the different Abaqus versions on identical dummy tests. "We can literally press a button and launch all of the validation tests on a high-performance computing cluster and then generate a report to tell me which of the 350 tests matched and which didn't," Lalor says. "That gives us an 80 percent reduction in maintenance cycles."

Since building and validating virtual crash test dummies is a team, not an individual sport, the use of SLM and Isight has also aided in collaboration. "This allows multiple team members to collaborate on the same data in a controlled way," Lalor says. "Before SLM, the data was on individual people's hard drives or shared drives and you had to call `Joe' to ask about changes in a file."

First Technology Safety Systems, which uses Abaqus as well as other simulation tools to create its physical and FEA crash test models, sees process automation as the wave of the future for simplifying what is now, admittedly, a labor-intensive, data management process. "We definitely see a need for this," says Roel Van De Velde, CAE sales and customer relations manager for FTSS Americas. "Today, it's very labor-intensive to make sure we use the correct data, and we plan to have the resources available in the next six to 18 months to have our models ready to integrate into this kind of process automation environment."