One of the more intriguing aspects of Big Data is its potential to create profitable new provider services for consumers and other end-users. Digitization throughout product development and lifecycle management will have a massive impact on productivity and services. And the trend is driving companies like Siemens to develop sensors and vertical software that are redefining not only product design, engineering, and manufacturing but also service operations.

In his opening presentation at the Siemens Industry Analyst Conference 2015, held September 8-10 in Boston, Horst J. Kayser, chief strategy officer, said the growing interconnectivity of equipment as well as the development of cloud computing (collecting and analyzing the terabytes of data that stream in daily from the Internet of Things) have enabled upgraded operations as well as whole new business models.

Kayser noted that Siemens-built digital and analytical systems and software are connected to 280,000 machines worldwide — a number that is growing daily. By 2020, he predicts 20 billion machines and systems — more than the global human population—will be digitally connected via the IoT (though not all by Siemens equipment).

Siemens has already established service-oriented businesses that use sensors and digital connections to remotely monitor industrial equipment such as wind and steam turbines and electrical grids. As an example, Kayser pointed to a service contract between Siemens and a Spanish rail company that calls for “defined and guaranteed uptime” on a high-speed line between Barcelona and Madrid. Kayser said that by installing sensors throughout the trains and monitoring critical equipment, Siemens can predict when maintenance is necessary and schedule repairs at optimal off-peak hours. 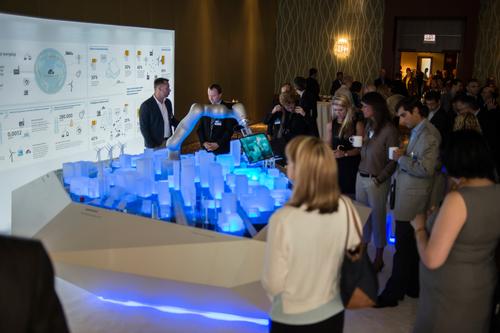 “There is substantial value in user-generated data,” Kayser noted. In addition to bringing operational improvements, data can be used to expand business and revenue for a supplier, as the Siemens example shows.

Siemens has set up its own industrial cloud platform, with 300 users so far, that allows companies to collect and analyze machine data worldwide. “They use the data for benchmarking and analytics and to establish industrial ecosystems where customers can experiment and develop their own data systems and approaches,” Kayser explained.

Kayser sees open-source systems that are compatible with equipment and software from different vendors as the future of the IoT and digitalization. This will be an obvious plus for integration of mechatronics and other systems. “Only companies with advanced software, equipment, and user know-how can generate performance improvements across the entire value chain for themselves and their customers,” he concluded.