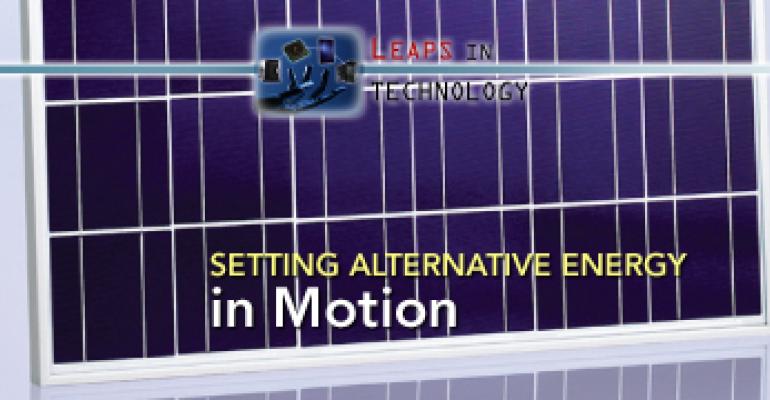 Both wind and solar have been growing quickly over the past couple of years. According to the American Wind Energy Assn., the annual growth rate of wind energy capacity in the U.S. stood at 29 percent for the five years ending in 2007. The association also projected U.S.-installed capacity will increase from 17,000 MW at the end of 2007 to 25,000 MW by the end of last year. Solar power is growing at a fast clip, too. The Solar Energy Industries Assn. puts the photovoltaic capacity growth at 45 percent last year, while the capacity utility-scale solar concentrators grew 17 percent just from the opening of a 64-MW plant in Nevada. The growth looks likely to continue now that the U.S. Congress has re-upped the tax credits that help propel these technologies.

Alternative energy's real and expected growth has already put some pressure on the supply of the most specialized types of motion components. Lead times for wind turbines, for example, now stretch to 2011 or even 2012. The long lead times are, in part, due to the difficulty of sourcing the 15-ton-plus gearboxes that offer the right combination of size, weight, precision gearing and reliability. "It's a balancing act that's much tougher than traditional industrial applications," says Parthiv Amin, president of Winergy Drive Systems, a maker of the gearboxes and power transmission components used in wind machines.

But there are also plenty of opportunities for machine builders and systems' integrators who can pull together systems using less-specialized motion components. Mark Finocchario, president and CEO of Schott Solar Inc., says solar module manufacturing, particularly those who rely on bulk silicon processes, have some obvious connections with semiconductor manufacturing. "Solar doesn't quite have the same degree of complexity, but it does require highly specialized equipment for each step." So far, companies like Schott Solar, which is opening a new solar module plant in New Mexico, have been able to "redeploy" existing robot, materials' handling and general motion technologies for their manufacturing operations.

But Finocchario hints that machine builders and systems integrators who can deliver on the specific needs of the solar industry will have an opportunity on their hands. "What they have to recognize is that solar doesn't have the same cost model as the semiconductor industry," he says. Put differently, solar manufacturers want to pay for the precision they need but not more.

Among the early commercial efforts targeted at solar manufacturing lines, Bosch-Rexroth has created a specialized conveyor system built from the ground up just for solar module manufacturing. Based on the company's modular TS Conveyors, the TSsolar features modifications intended to protect wafer- and thin-film solar cells as they make their way through their multi-step manufacturing processes. According to Kevin Gingerich, marketing director for the company's linear motion and assembly systems, conveyor modifications include an upgrade to servo drives, which can better meet the need for controlled acceleration and deceleration of the panels. Each segment of the TSsolar features its own drive unit. The drive units all work together to manage the flow of multiple panels on the production line without collisions. With a 200C high-temperature option, the TSsolar also stands up to hot glass panel temperatures associated with solar cell manufacturing. It also offers ESD and cleanliness options.

And Bosch isn't alone in adapting existing equipment to solar manufacturing. In robotics, Adept Technologies just came out with a handling and high-resolution solar cell inspection system. It's based on the company's Quattro robot outfitted with a 2-D- and 3-D vision system from LMI.

The motion opportunities in solar extend out into the field, too. Suppliers of drive systems and mechanical components have been reporting a huge upswing in interest from those who integrate solar power systems with sun-tracking capabilities. "The solar guys are interested in high-end, zero-backlash positioning components," says Jean-Paul Beyak, an engineer and regional manager for Nexen Group Inc. He recently helped a customer spec out a roller pinion gear system for a new solar device he can't yet discuss in detail. Likewise, Cone Drives has seen an upswing in solar-industry requests for its high-precision Whisper Servo drives, which have low- and zero-backlash options. "We're seeing lots of solar right now, especially in the high-precision systems," says Mitchell Machelski, Cone Drives' product manager. "That makes sense since the positioning accuracy of a solar tracking system can improve the energy collection efficiency of the whole system."