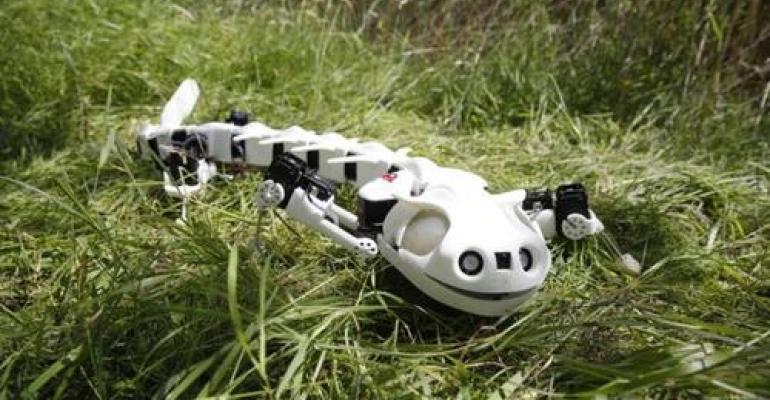 Swiss researchers have created a salamander-inspired robot that's shaped like the real thing, and walks like one, too. After several years of building salamander robots, as we've reported, this is the first time the scientists have used a model based on accurate 3D motion of the animal's skeleton. The result is a robot that closely mimics how a real salamander swims, walks, and crawls.

Dubbed Pleurobot, the salamander robot designed by the Ecole Polytechnique Federale de Lausanne (EPFL) is helping scientists there better understand how the locomotion of vertebrates evolved from swimming to walking, especially the workings of the spinal cord and how it interacts with the animal's body. This research at EPFL's Biorobotics Laboratory is also expected to aid in the development of better neuroprosthetic devices and other therapies for amputees and paraplegic patients. 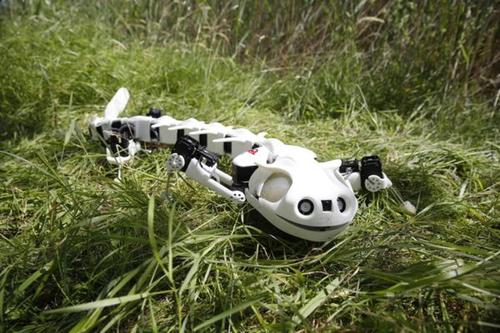 A real salamander has 40 vertebrae and multiple joints. Some of those joints can move in more ways than humans' joints can, such as side-to-side or up and down, as well as freely rotating. In contrast, Pleurobot has fewer bones and joints: only 11 segments along its spine, plus 27 high-end servomotors. The researchers simplified the bone structure by reducing the number of motorized segments to the minimum needed, and by determining their optimal placement, to correctly reproduce the animal's gait in three dimensions.

To get an accurate 3D model of how the animals move the team recorded x-ray videos of salamanders, called cineradiography. These recordings were made from both the top and the side. They tracked up to 64 different points along each salamander's skeleton while it walked, crawled, and swam, to see how the bones move in three dimensions. As you can see in this video, which includes x-ray video segments of the robot and a real salamander side by side going through their paces, the robot's and animal's gaits are very similar.

The Biorobotics Laboratory team, headed by Auke Ijspeert, also used other technologies to construct Pleurobot, including optimization software and 3D printing for making its bones. As the researchers describe in an article in the journal Interface, previous versions of the robot helped to test and confirm their hypotheses on how the locomotor neuronal networks of the spine and limbs interact to generate the animals' basic walking and swimming gaits.