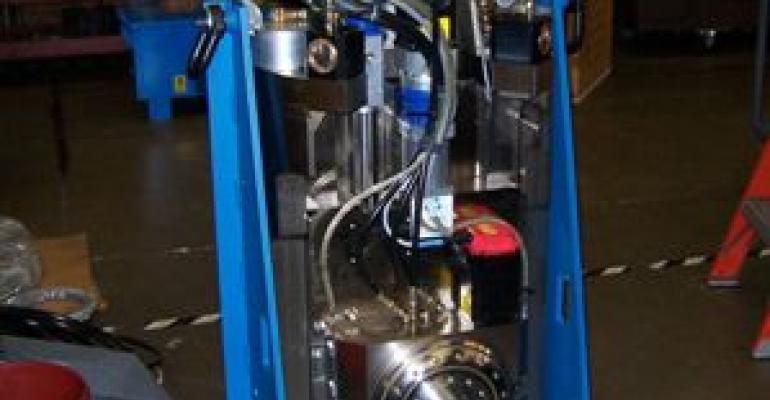 For nuclear power to be a viable energy alternative into the future, it is important to show that existing, aging facilities can be properly maintained. But maintaining fixed assets residing in a radioactive environment is not an easy challenge. Consider the not-uncommon scenario of repairing welds under water in a nuclear reactor primary containment vessel.

The scenario was the centerpiece for a robotics design project that got its start when a Swedish power company approached Climax Portable Machine Tools (Newberg, OR) with a new challenge. Several years ago, Climax and Concept Systems (Albany, OR) developed a robotic CNC machine tool that helped the Swedish power company repair pipes in its reactor plants, so when welds in some of the plants' reactor vessels needed replacement, the Swedish company came back to the same team for a solution.

Reactor Pipe Repair
In a nuclear reactor, multiple pipes, which range in diameter from two to 4.5 inches, connect to the cylindrical reactor vessel via "hot and cold leg" nozzles so that their ends are flush with the curvature of the inside surface of the vessel. As reactors age, some of the welds can exhibit cracking where they meet the vessel wall. The challenge for Climax and Concept was to develop a robotic CNC machine that could remove the existing weld material around the nozzle so that the surface could be re-welded.

After the welding is done, the robotic CNC must then machine the finished surface to be flush to, and as smooth as, the inside of the vessel. To do this, the robotic CNC machine tool needed to execute sophisticated geometries of motion, while performing between 40 and 50 machining processes 30 feet under water to a tolerance of plus or minus three thousandths of an inch.

The machine needed to be designed to be located inside the reactor vessel and operated by remote control. In addition, provisions needed to be made to keep the robot and the weld that is to be replaced dry.

Portable CNC Robot
Engineers at Climax Portable Machine Tools created a portable 3-axis CNC-controlled machining robot, while the power company built a cofferdam that would be lowered into the reactor vessel and sealed to the side of the vessel, covering the nozzles with the weld to be replaced. Hydraulic arms hold the cofferdam to the side of the vessel to make a water-tight seal. Climax's robot rides down into the cofferdam on rails until it is positioned roughly in front of the nozzle. A touch probe on the robot extends to locate the nozzle's position so that the robot has a spatial reference from which to do its work.

To program the sophisticated control software, Climax worked with Concept Systems engineer Sergei Furduy. The CNC programming was very challenging because the reactor vessel is cylinder shaped, and its inner surface is curved. Furduy helped Climax research CNC controllers for the task and settled on a controller supplied by Fanuc.

In typical reactor vessel repair scenarios, the nozzle to be repaired extends almost all the way to the inside surface of the reactor vessel and the weld is around the outside of the perimeter of the nozzle. The tool needs to follow the profile of the vessel wall where the nozzles come in. The groove machined by the tool has to follow the curve at a constant depth. It is called a "J-groove" because of its shape (one wall of the groove is higher than the other as it is machined into the wall of the vessel).

In total, the CNC robot created by Climax and Concept Systems is capable of seven critical tasks:
1. Survey the nozzle;
2. Machine a J-groove using at least six different nozzle sizes with a shallow and deep groove profile for each size. The robotic CNC machine has to cut a shallow groove first and inspect for cracks. If the crack is still present, it must then do the deep groove profile;
3. Post weld blending of the surface (machine new weld flat);
4. Polish the reactor vessel wall (after blending);
5. Polish the nozzle ID (different tool and program used than that for wall polishing);
6. Bracket machining (establish clearance so the J-groove machine spindle doesn't hit the bracket); and
7. Bracket polishing (make sure no burrs are left behind that could break off and float around in the reactor during operation).