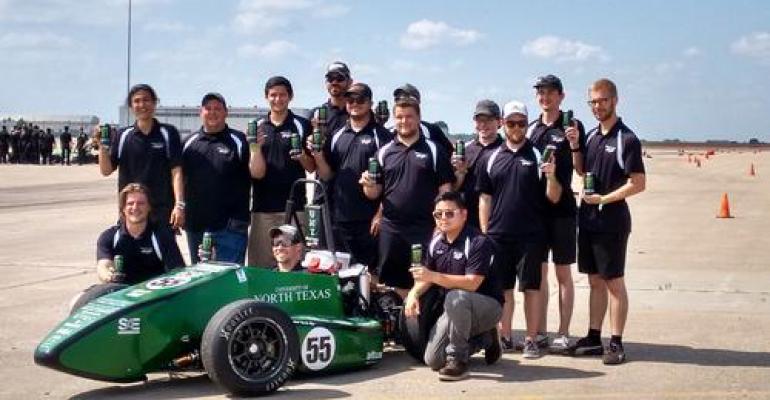 Teams from across the US, and several countries worldwide, competed for awards in multiple categories at the 2016 Formula SAE Lincoln competition, which ended June 18. The University of North Texas (UNT) team, featured in an article a few weeks ago, was anxious to improve on their 63rd -place overall standing from last year. 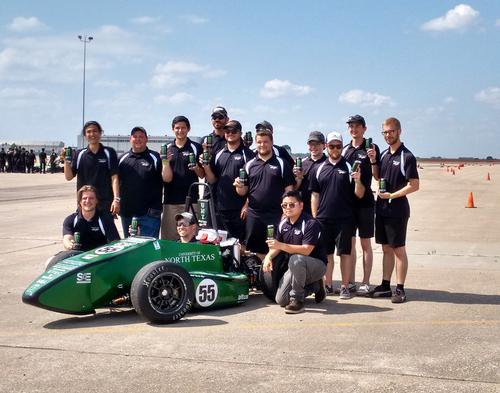 To properly conduct testing on the finished race car, the team needed a parking lot large enough to contain their mock race track. Luckily, UNT's administrative staff was able to contact the local school district's athletic complex who were willing to help by offering the use of their huge parking lot.

"Our build schedule got pretty tight toward the end. Coming into that third week before the race, we had driven the car but had not run it hard," said Justin Vincik, student vice president of UNT's Mean Green Racing.

Once the team had run the car "hard" they broke an axle spindle only two weeks before event start; the spindle holds on the wheel and brake assembly. "We contacted our sponsors, but they couldn't get a new spindle to us quickly enough," said Vincik. "We had to scramble to make our own spindle at school." The team worked a manual lathe for turning operations for nearly three days. The remaining operations were CNC milled.

The spindle breakage also bent the brake rotor and ruined the brake pads. Replacing the brake pads caused no issues, but the new rotor differed slightly from the other three. "It made a slight clicking sound that we just had to live with," said Vincik.

Formula SAE decibel requirements are 100 DBC at idle and 110 DBC at 11,000 rpm, which presented another challenge to the team. "Our car is a 4-cylinder, so it runs at a really low decibel level, so we [naturally] have a lot of low-end noise," said Vincik. The team had to get creative -- and quickly! Their solution included adding another loop of pipe with an additional muffler to quiet the car within the required ranges.

UNT passed all safety and technical inspections with flying colors. This in itself was a win for UNT's Mean Green Racing. Last year the team was only able to participate in the Static events because of a problem with an engine control unit -- they did not get a chance to race their car in the dynamic events.

Static events include design, cost, and business presentations. For design presentation, judges evaluate the engineering effort that went into the design of the car and how the engineering fulfills the needs of the market both in terms of vehicle performance and overall value.

For the cost presentation, students present the car as if selling 100 units. The judges even question specific details, such as what machining processes were used for certain components, and then they question if that process was the best choice for that particular component or group of components. "It is a very conversational interaction with the SAE judges," said Vincik. "They want to know the specific details of how the car was built so they can determine if it was built in a cost-effective manner."

The business case presentation is designed to teach students about the factors that need to be considered when a company embarks on the development of a new product. These include identification of market and likely sales volume, profitability, key features applicable to the selected vehicle concept, and target market size.

"The business presentation is set up similar to a Shark Tank type of scenario," said Kyle McDougal, Mean Green Racing team manager. "The presentation is in front of three judges, where we pitch the car as the best solution for the weekend autocross racer." This provides opportunity for young engineers to begin to make the connection that what they build must be sold. If it cannot be sold, it has no value to the company. They get to experience, firsthand, the importance of selling concepts, designs, and ideas to buyers.

Things begin to get extremely exciting for the students in the Dynamic events because their baby -- the car they have all worked so hard to design, build, and test -- is finally given the chance to race against the other competitors. Dynamic events include:

Skidpad, a circular area of flat pavement used for various tests of a car's handling:

After the Autocross event, Mean Green Racing discovered another spindle-related issue. "The weak threads were first discovered when we tried to torque the right-side hub down," said Vincik. "This time, the nut had stripped the threads that hold it tight to the bearing. Taylor Race Engineering helped us onsite to make the fix." The end fix was re-cutting the threads to a smaller nut and ensuring that the threads were cut deeper, so they could grab on to the correct amount of material.

The Endurance event is often the make-or-break event for many teams.

If a car leaks any kind of fluid, it is pulled off the track. If a car stalls and cannot be started, it is out. If a car gets a flat tire -- out. If an engine starts on fire -- out. (This actually happened but no one was hurt, thanks to properly equipped, quick FSAE volunteers.)

The Endurance event is worth one-third of all points possible for the competition. It is a 22 km race with two team members: driver one races seven laps and driver two does eight. For Mean Green Racing, a problem became apparent at the driver change. The left hub had stripped the threads that hold the wheel tight.

As the judges were looking over the car during driver change (standard safety procedure), they noticed one of the front wheels was loose when they checked the suspension components to ensure nothing was broken. "By the rules we are required to have a locking nut on the spindles with at least two threads showing," said Vincik. "Our lock nut had stripped some threads but we were still within the rule requirements, and the nut was not moving when they tried to turn it by hand. So they let us continue racing!"

Preliminary results show that Mean Green Racing placed 33rd overall -- a big improvement over last year. "The Formula SAE Collegiate Design Series is a great chance for students to begin shaping their worlds in tangible ways that are both career-enhancing and lots of fun," said Ken Coburn, owner of GoEngineer, a Mean Green Racing sponsor. "GoEngineer is proud to sponsor these up-and-coming engineers!"

Mitch Bossart is a technology enthusiast, and he loves writing about people and companies that are shaping our world. You will find him at various coffee shops throughout the Minneapolis/St. Paul area -- writing, socializing, or dreaming about the next great American screenplay.