The Logic of Balancing VFDs and PLCs 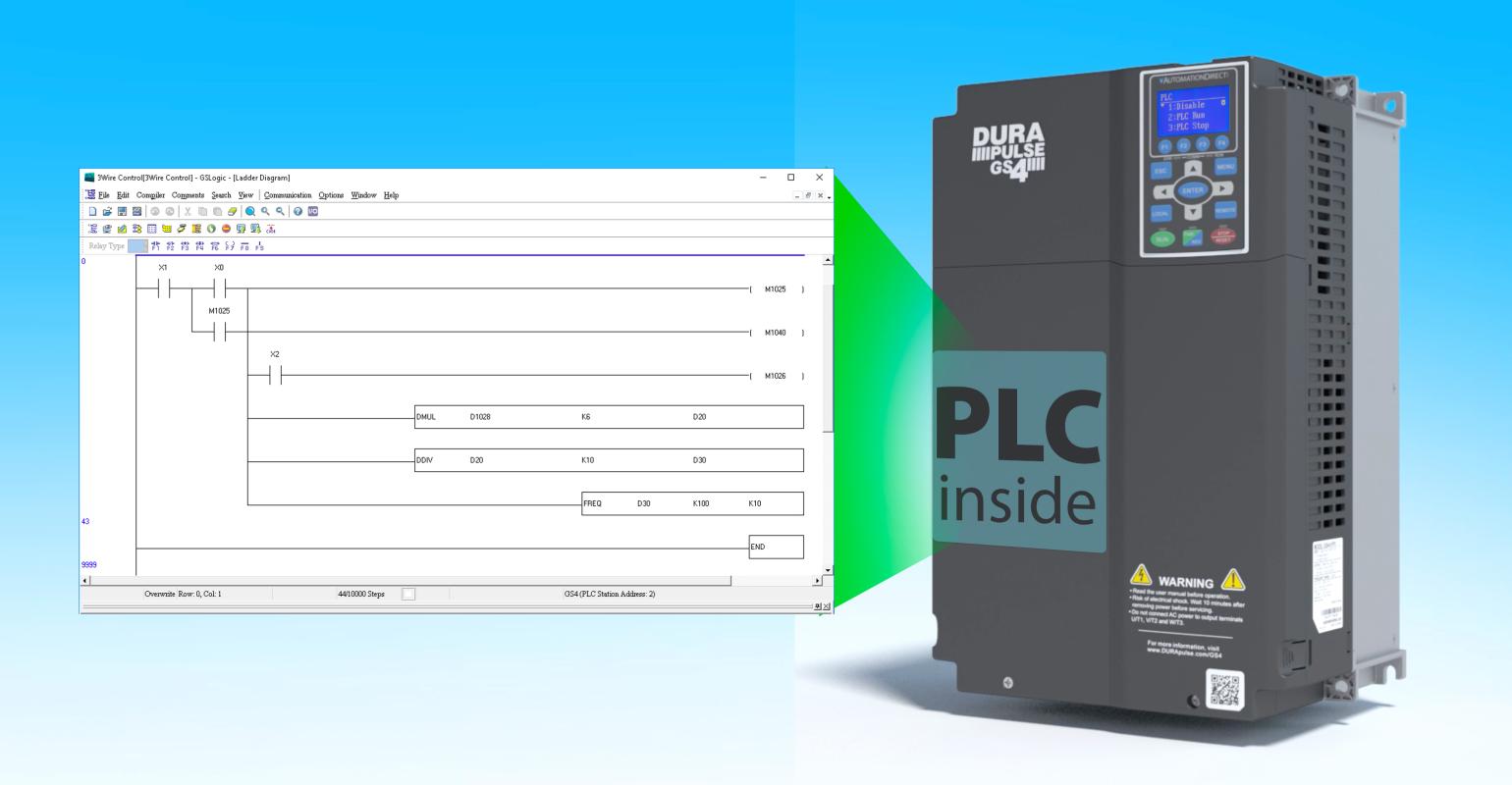 The latest VFDs now include not just basic motor control, but also program execution capabilities. Two very common and independent automation product types, PLCs and VFDs, have thus merged to a limited extent, offering new options for end users. This article examines when this hybrid technology can best be used to solve an automation need, along with limitations that might exclude it from consideration.

Prior to the common availability of VFDs around 50 years ago, motor speed was varied using complicated and inefficient mechanical means such as drive shafts and pulleys. VFDs provided significant improvements by varying motor speed electrically. Operators could now use the VFD’s keypad, remote pushbuttons, or a PLC to command a motor to start, run at a speed, and stop—but this was just the beginning.

VFDs progressively gained more on-board configuration features, such as the ability to accelerate and decelerate at specific rates following a function like a linear ramp or an S-curve. Frequency skipping, over speeding, and eventually proportional/integral/derivative (PID) analog loop control were added over the years and became common. Open- and closed-loop vector control introduced improved regulation of motor speed and torque, and even position control for basic motion control applications is now possible. Another relatively new feature for improved VFD position control is support for permanent magnet motors.

Hardwired I/O interfaces allowed external systems to command and monitor the VFD in multiple ways. In due course, built-in fieldbus or networking communications enabled a single PLC or other controller to access the full set of VFD commands and variables.

Besides the flexibility of VFD motor control, users found they could achieve energy savings by operating certain equipment at lower speeds. These savings could pay for the cost of the VFD over time. However, none of these benefits and configurations truly acted as logic programming, so operators or an external PLC were needed to trigger VFD actions.

Just as VFDs provided a better way to control motors, PLCs delivered a software-based solution to supersede traditional hardwired relays and control circuits, providing engineers with vast improvements in terms of power and flexibility. PLCs have been available for approximately the same amount of time as VFDs, so there have been many decades of development.

PLCs were the natural place to centralize control and visibility of processes, and VFDs continued in their motor control role. But ever-improving processing power, memory availability, communications options, and network speeds began to blur the line between the two.

VFDs and PLCs Better Together

When VFDs and PLCs were first conceived, each was mission-specific, which is the nature of new technology created to solve a problem. But as they matured and became far more intelligent in their own ways, PLCs and VFDs increased their feature sets and began to overlap capabilities, common for developing technology. PLCs gained motion-control functionality, while VFDs gained logic programing abilities.From the VFD standpoint, the overlap or merging of properties became possible because the basic microprocessors used in VFD control were powerful enough to accommodate the features needed for PLC functionality. In a sense, the technology brought these other features along for the ride at little or no cost, providing an opportunity for savings.

Setting aside the motor control properties of the VFD, the big differentiator between logical control using a PLC or a VFD comes down to available I/O quantities and types. With access to enough I/O, a VFD begins to look like a micro PLC.

So, the trick when designing systems is knowing how to effectively use the integrated abilities of these smart devices. This involves determining the best way to allocate control functionality among various target device options to meet automation goals.

Finding the ideal way to use VFD and PLC control capabilities requires an assessment of the process functionality and overarching automation goals. Direct control by a VFD will be subject to hard limits, well below those of most PLCs. These limitations apply in the following areas:

Despite these limitations, there are benefits to pushing some amount of process control out of a PLC and into a local VFD:

When a machine or process has minimal complexity with low I/O counts, the balance shifts toward implementing control logic in the VFD. This is especially the case if there are multiple similar trains of equipment each with their own VFD, and if there is a desire to keep as many local trains online as possible.

Another approach is to use VFD I/O and control programming to handle local interlocking and process control, in conjunction with a supervisory PLC to enable and disable VFD operation and provide operating setpoints. In this configuration, the VFD and its own control logic act as a packaged automation system. This methodology is very beneficial to OEM designers for small equipment skids with one or more VFDs because it allows delivery of an automated package without the need for a separate PLC.

However, once any of the limits noted above have been exceeded, or if there is an overriding process reason to closely coordinate all VFD-associated systems, then the balance shifts in favor of using one or more centralized PLCs.

Smart VFDs Go to the Field

Material handling OEMs find that intelligent programmable VFDs are a good fit for some types of conveyor subsystems. Motor-driven conveyor sections are often configured as modular zones, with the ability to interlock upstream and downstream as necessary.

For each zone, VFD I/O points are connected to upstream and downstream zones, and to a local photoeye arranged to sense boxes. Any time an upstream conveyor zone is running, or an inbound box is sensed, the VFD signals the downstream conveyor to run and be ready to receive boxes. When a conveyor zone has not seen boxes arrive for a time, it can idle itself to save energy until it is called for it again. Any number of conveyor zones can be linked in this way in a modular manner without requiring a supervisory PLC. Local controls can also be easier for maintenance personnel to troubleshoot if there are problems.

A small sump pump system is another example where local control on-board a VFD can provide the required functionality. The VFD is already required to run the pump, and the VFD I/O points can be wired to local level switches. Once enabled, the VFD will start when the water level rises to high and stop once the level is pumped down to low. The VFD can communicate the I/O status and system operational mode up to a higher-level supervisory system if desired, but all local control operates as long as the VFD has power.

Of course, a larger multi pump system may be better served with one supervisory PLC, even if intelligent VFDs are used. A master PLC could coordinate various lead/lag pumping schemes, incorporate a pump alternating system, and incorporate other local devices like valves and flowmeters.

Modern VFDs offer comprehensive motor control functionality, and many of the newest models are programmable and feature I/O points, much like a PLC. Smart VFDs give designers another option for implementing control, and are well suited for localized functional areas with small I/O counts. These intelligent VFDs can also coordinate well with supervisory systems, providing an economical and robust solution for many applications.

Jeff Payne is a Product Manager for the Drives & Motors Group at AutomationDirect. Before joining the company 20 years ago, he managed, designed, programmed, installed, maintained and repaired a wide variety of highly automated equipment. He has been working in the field industrial automation for nearly 28 years and earned a degree in Industrial Systems Technology and Industrial Automation from Lanier Technical College.