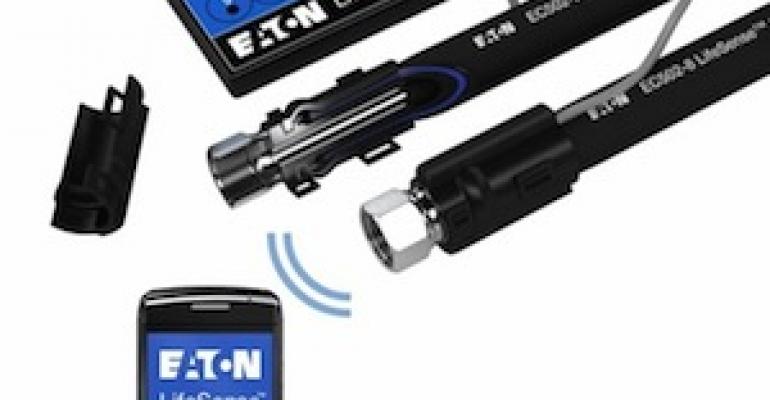 Sudden hose failure has been a major potential problem for fluid power applications since hydraulic hose was first introduced decades ago. Sudden failures can lead to safety issues, environmental concerns and downtime that in extreme cases, such as offshore oil rigs, have been estimated to cost as much as $500,000 a day.

"The uniqueness of LifeSense technology is that it truly monitors the condition of the hydraulic hose as opposed to systems that predict hose failure basically using a time-based replacement process," says Doug Jahnke, Eaton product marketing manager.

Jahnke says it's impossible to tell when a hose is failing because it fails from the inside out. Most hydraulic hoses have a rubber elastomeric cover, a rubber tube and wire reinforcement. During its life, the fatigue of consistent hydraulic surges eventually wears out the hose.

Eaton's new LifeSense hose is very similar to two-wire braid hydraulic hose and was developed in conjunction with Purdue University and the Purdue Research Foundation's Office of Technology Commercialization. The goal is to continuously monitor the health of hydraulic hose assemblies and alert users when an assembly approaches the end of its useful life.

"Most hydraulic maintenance programs are designed to avoid hose failures by replacing assemblies at regular intervals, using a schedule based on usage data or past experience," says Jahnke.

"A hose is basically part of a hydraulic circuit, and what we've done with LifeSense technology is also make it part of an electrical circuit," says Jahnke. "A very low voltage signal is going through the entire length and circumference of the hose and, using feedback from the electrical signal to measure resistance, we can determine if the hose is nearing the end of its life."

"We've proven very clearly in the lab that it consistently reports certain feedback that lets us know it's close to the end of its life," he adds.

The LifeSense monitor uses a wired connection with wires running from one end of the hose to a microprocessor and software in the monitoring device. Whenever the equipment is on, it provides a continuous monitoring process measuring electrical feedback using contacts on the hose.

Right now, each monitor can be connected to up to eleven hoses. Any number of hoses can be monitored using multiple monitors wired into either a 12 or 24V system, so it can be used on mobile or industrial equipment. A converter for 110V operation is also available, and Eaton is actively working on a new wireless conection system as well.