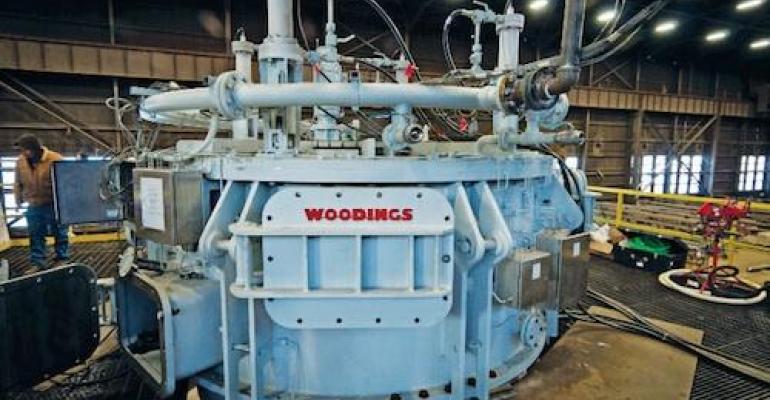 While the basic design of iron and coke blast furnaces is centuries old, today's steelmakers are looking for innovative ways to produce molten iron with increased production and efficiency. That's why one of the world's largest steel producers in China turned to a new industrial hydraulic solution to achieve motion control accuracies and levels of control previously unheard of in this industry.

"The way iron pellets and coke are charged in layers inside a blast furnace really affects the melting process," says Al Colucci, vice president of engineering for Woodings Industrial Corporation. "The layers are created by a system called a hydraulic distributor, using a chute located in the throat of the blast furnace, to deposit raw materials in precise locations." 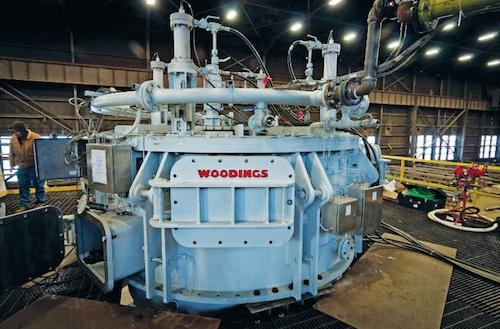 The burden of tight tolerances
A hydraulic distributor performs two functions: rotating and tilting the chute. The more accurately the chute can be controlled, the more precise the layers and the more efficient the blast furnace becomes. The majority of burden distributors use electromechanical gearing systems to drive the up-down movement of the distributor chutes, but these systems do not provide the level of precision or control Woodings's Chinese steel manufacturer sought. In addition, they are difficult to repair and maintain in the high-temperature environments atop the blast furnace.

According to Woodings, the steelmill had been using a hydraulic distributor of its own design on six blast furnaces. However, these systems used a traditional hydraulic circuit with open loop control. To help increase accuracy and performance, the steelmaker called on Woodings, which in turn worked with Bosch Rexroth on a technology solution.

Colucci told us the level of precision and control the company wanted was unprecedented for this type of system. Chute movement at the endpoint was limited to no more than 0.01 of an inch (0.25 mm), or one-tenth of one degree. Typically, burden distributor chute endpoint control is lower accuracy -- within inches. However, Woodings's customer set this accuracy goal because it's convinced that the more precisely it can control the material distribution into the blast furnace, the more efficient and productive the blast furnace will be.

That degree of chute control is difficult to achieve because, as tons of iron ore pellets and coke tumble down the chute, the load and the angle of the chute change. The chute tends to extend when loaded, and, when the load is released, it retracts.

Plus, all this is happening on the move. The chute rotates at 8 RPM, completing a cycle every 7.5 seconds. The rotation changes the loading on each of four hydraulic cylinders. The load on the first cylinder passes to the second cylinder, then to the third and fourth, then back to the first. Adding to the challenge is the extremely demanding environment atop the blast furnace, with heat from the furnace along with high levels of debris and soot associated with iron manufacturing.

Given these conditions, it was necessary to position the hydraulic control valves for the circuit in an enclosure away from the cylinders, resulting in long hydraulic lines. This distributed design has advantages because the hydraulic valves and controlling electronics last longer and are easier to maintain away from the harsh furnace-top environment. The hydraulic distributor also uses far fewer rotating components, so that the control components last much longer. However, the design presents a controls challenge. Fluid in long hydraulic lines acts like a spring -- expanding and contracting -- making accurate motion control even more difficult.