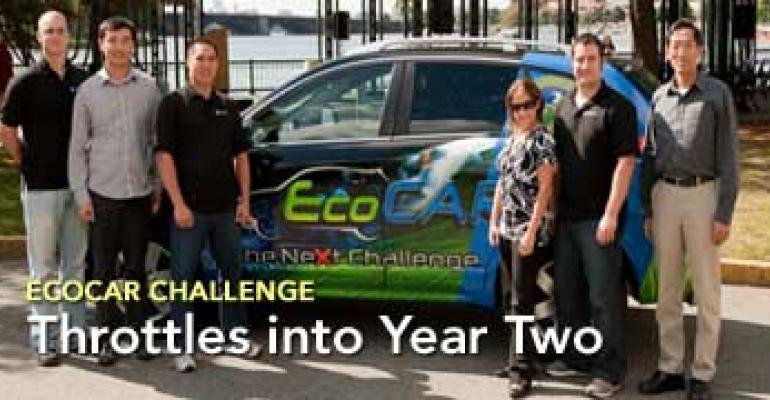 Seventeen university teams are heading into the next stage of the three-year EcoCAR: the NeXt Challenge automotive engineering competition, convening in Boston this week for additional training designed to prepare them for the validation and testing work that comes with year two.

The competition, established by the United States Dept. of Energy (DOE) and General Motors and managed by the Argonne National Lab., challenges university teams in North America to reduce the environmental impact of vehicles while retaining performance and safety standards and without sacrificing consumer appeal. The teams are charged with reengineering a donated 2009 Saturn Vue to explore advanced propulsion and clean vehicle solutions, including full-function electric, range-extended electric, hybrid, plug-in hybrid and fuel cell technologies. The students have to comply with real-world engineering processes to design and integrate their advanced technology designs and they are also working to incorporate lightweight materials to improve aerodynamics and to utilize alternative fuels such as ethanol, biodiesel and hydrogen.

Rather than being a forum to generate production-ready new, alternative vehicle technologies, the EcoCAR challenge is really about fostering a breeding ground for up and coming engineers, introducing them to key technologies and indoctrinating them in real-world design processes. "While the technologies that go into the vehicles are definitely cutting edge, we don't think one of these vehicles is going to change the world or outperform GM," says Mike Walstrum, control and simulation engineer at the Argonne National Lab. "We're trying to acclimate students to the real-world environment. Our goal is to develop engineers of the future who can really hit the ground running and start their careers off by developing environmentally friendly automotive applications."

To that end, the teams are settling into year two of the competition, focused on the testing and validation stage of their designs. While model-Based Design tools  such as SimuLink from The MathWorks and others from National Instruments were used the first year to create the engine components, the tools will now play a role in optimizing and testing the design parameters and the control software prior to the build stage where the teams create near-production-ready components. Model-Based Design is important to the competition â€” and design teams, in general â€” because it allows engineers to test a variety of scenarios quickly before launching into the more costly and time-consuming physical implementation.

"Engineers are good at experimenting with things and trying different configurations, and model-based methods provide a safe playground where they can investigate different configurations," says Paul Smith, director of consulting services at The MathWorks. Because real-world automotive suppliers like GM apply model-Based Design in their design processes, exposing up-and-coming engineers to the discipline and the available tools is critical to their training, Smith says.

For Jeremy Wise, team leader for the University of Victoria's EcoCAR team, learning to embrace model-Based Design has been the ultimate learning experience of the challenge. "At first, I didn't like it," he says, "because you had to do work before you got to play with the engines and motors. I just wanted to get my hands dirty working on the cars. This has given me a taste of the real world."