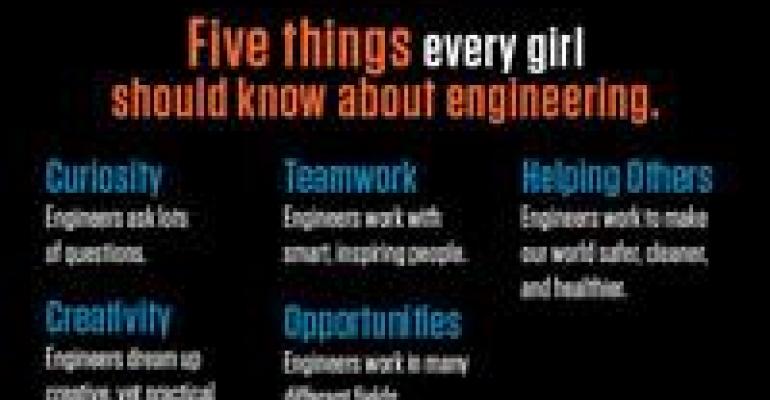 There is still a significant gender gap in engineering and other STEM fields, but the organization sponsoring Engineers Week is trying to change that.

Tomorrow is Introduce a Girl to Engineering Day, sponsored by DiscoverE, an arm of the National Society of Professional Engineers.

This theme of this year's day -- the first of which was held in 2001 -- is, "There's a Little Bit of Engineer in Every Girl," and the organization is using the hashtag #BringitOut to distinguish the day from other events and put the focus on young women. 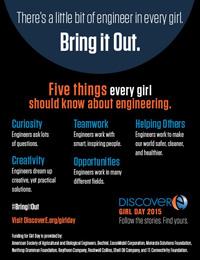 "Certainly we know the need for [female] STEM workers," Leslie Collins, executive director of DiscoverE, told Design News. "Studies from Engineer Your Life and Changing the Conversation have found that girls: don't know what engineering is; believe engineering is difficult and challenging; and think engineers must be exceptional at both math and science. These same projects also found that when we change how we talk about engineering, we can change what they think about engineering."

Women continue to remain underrepresented in the science and engineering workforce, although to a lesser degree in the past, Collins said. The greatest disparities between the genders occur in engineering, computer science, and the physical sciences.

Women make up only about 13% of total engineers; however, there is diversity in different fields, she said, citing figures from the US Department of Labor. More specifically, about 15.6% of chemical engineers, 12.1% of civil engineers, 8.3% of electrical and electronics engineers, 17.2% of industrial engineers, and 7.2% of mechanical engineers are women.

These numbers are in danger of falling even lower, according to a recent study from the Higher Education Authority. The authority found that 10 years ago, 47% of new entrants into higher education science, math, and computing courses were women. That fell to 40% in 2013, with 436 female entrants into computer science at the university level out of a total of 2,613, or 16%.

This year's day for girls aims to try to avoid this potential decline, combining efforts from both the public and private sectors. It includes workshops, lab tours, online discussions, and hands-on activities at businesses, universities, libraries, and other venues across the country. In total, DiscoverE's event will provide engagement and mentoring to as many as 1 million girls thanks to 10,000 volunteers, Collins said.

Even lawmakers are getting involved. Tomorrow, there will be a Capitol Hill briefing open to lawmakers, non-profits, and corporations hosted by Rep. Daniel Lipinski (D-Ill. 3rd District). Speakers will include representatives from American Society of Agricultural and Biological Engineers, Argonne National Laboratory, and the University of Texas in Austin, which has more than 4,000 girls registered for its upcoming Girl Day event.

Introduced at the briefing will be #BringItOut, a new video-driven social media campaign that is a call to action for those in power to try to encourage women to enter engineering and show the potential between young girls and STEM fields. The campaign features leading women engineering professionals delivering personal messages about their experiences in the field, and focuses on five key themes that aim to appeal to girls: curiosity, creativity, teamwork, finding opportunities, and helping others.

Other events to encourage girls to join STEM fields will come from companies in the private sector. They include the following:

More information about National Engineers Week and related Girl Day events can be found on its website.