Faster, more powerful, more responsive, and greater efficiency -- today's off-highway transmissions are expected to have all those qualities. Now that most Original Equipment Manufacturers (OEMs) have integrated new engines to be compliant with Tier 4 emissions regulations, they have shifted their focus to powertrain and other distributed systems. The market has many choices when it comes to transmissions -- hydrostatic, hydrodynamic, power-split, powershift, electronically controlled, continuously variable, and even hybrid. What characteristics are most important for the application at hand? And, once the transmission is chosen, what control options will enhance and ensure its continued superlative performance?

The role of control
No matter what the transmission, the control system plays a critical role in optimizing performance through all stages of a machine's operating cycle. A good control system can deliver power when it's needed and conserve power when it's not. Speed of response, smooth operation, and the ability to deliver a variable pressure for smooth clutch engagement are also the hallmarks of a superior transmission control system. Smooth clutch engagement results in smoother machine operation, driver comfort, increased fuel efficiency, productivity, and longer life for both the clutch and the machine. And of course, controls should be designed to minimize hydraulic leakage in order to optimize fuel efficiency. 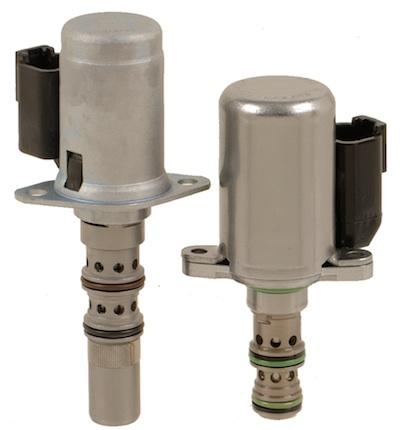 Among the many control options for transmissions are proportional control with pilot-operated or direct-acting valves, simple on/off control with solenoid valves, and pressure regulation with logic elements that keep the supply of pressure stable despite fluctuations in oil flow.

Electronic control is also an option for synchronization of transmission clutch, PTO, and fan with single, dual, or multiple input and output controllers. Clutch fill characteristics can be custom-programmed with proportional controls and the proportional controls can be synchronized to regulate forward, reverse, and multiple clutch actuation with smooth and accurate control of pressure.

In the world of electro-hydraulics, there is more than one way to configure a control system. The trick is figuring out the best options for the job at hand.

History of hydraulic transmission control
In the past, transmission clutch control consisted of two components -- a main stage spool installed into a body or casting and a separate pilot valve. The pilot valve could be an on/off solenoid valve or a proportional valve. This solution mirrors the stack valves used for main machine functions, many of which are still in use today.

Clutches inside mobile equipment transmissions, however, are now relatively small and do not require high flows. As a result, the next generation of hydraulic transmission controls for mobile equipment combined the main stage spool and the pilot valve into a single cartridge valve. This solution provided benefits such as cost-savings, reduced space requirements, and interchangeability.