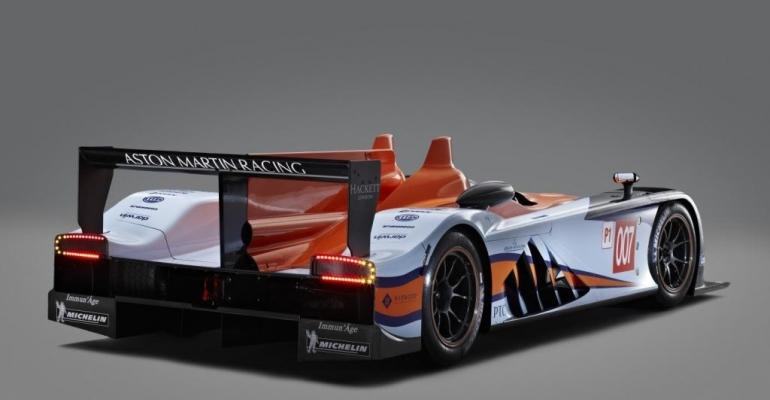 For the first time in recent years, Aston Martin Racing is moving away from a third-party chassis strategy to take soup-to-nuts ownership of the complete design and manufacturing for its new LMP1 motor sports car as it gears up for the 2011 racing season.

Prompted in part by new 2011 regulations mandated by the Le Mans governing body, ACO, Aston Martin Racing opted for the new ground-up design strategy along with plans to build an open cockpit vehicle. The changes also precipitated a major shift in Aston Martin Racing's design tools partner to PTC's Windchill PLM platform and Creo Elements/Pro CAD suite as part of its plan to get the next-generation vehicle to the racing circuit in a timely fashion.

"In racing, our biggest challenge is time -- we had to design and built the first car in six months," says Ian Ludgate, chief designer at Aston Martin Racing. "We had to complete the car design and create an engine completely from the ground up and to do so in the time frame we set for ourselves was incredibly challenging."

The new ACO regulations call for more energy efficient vehicles and for designs that bring more parity between diesel and petrol cars, Ludgate says. As a result, the Aston Martin Racing team chose to change tacks this year, designing an open cockpit car while including a new blade-fin and the significantly down-sized engine in keeping with the ACO's efficiency-focused regulations. The LMP1 sports a 2.0 litre, turbocharged six-cylinder direct injection petrol engine along with a new bespoke carbon fibre, open top chassis and is capable of racing up to 320 kilometers (or 220 miles) an hour when pushed to top speed.

Race to the Finish
Determining that it needed more robust data handling and management capabilities to do the job, the Aston Martin Racing team put in motion an extensive benchmark process to evaluate CAD and PLM tools, including PTC's software as well as offerings from Dassault Systemes and its incumbent CAD provider, Siemens PLM Software. The team determined that PTC's platform was a better fit, Ludgate says, due primarily to Windchill's data management and collaboration capabilities for letting non-CAD and non-engineering users visualize components and tap into engineering data without requiring an assist from the design team. For example, with the new platform, the purchasing department can now have access to drawings and data they need as part of the procurement process. "By taking this process away from us [in engineering], it means we can concentrate more on design and less on the process of getting the [vehicle] out to manufacturing," Ludgate says.

The integrated simulation and analysis capabilities of Creo Elements/Pro, formerly known as Pro/ENGINEER, also played a hand in the decision. With its previous toolset, Aston Martin Racing engineers had to tap a third-party tool to perform analysis on its mechanisms, like the suspension system, for example. With Creo Elements/Pro, the team can do the analysis directly in the software, which simplifies things and eliminates any incompatibility problems and miscues associated with transferring data between two programs.

"Historically, this had been a manual, iterative process where someone sat down, worked out a problem, determined how close they were to the design goal, made any changes and then did the calculations," explains Paul Haimes, PTC's vice president of technical sales. "The behavioral modeling within [Creo Elements/Pro] automates that process and takes out huge chunks of time."

Given that the design effort launched in earnest last September and racing season is just around the corner, any chance to compress the development cycle will help propel the LMP1 to the finish gate. Not only did the Aston Martin Racing team complete the design in less than six months, the first LMP1 has been manufactured and circuit tested and production of a second vehicle is already underway.

The car is set to compete in the LeMans race in June, and while the Aston Martin Racing team has high hopes for its performance, it's really looking to next year for the design to pan out. Using the PLM tools, the LMP1 design will continually be refined over the year, particularly in the area of aerodynamics, and the team is betting that 2012 will be its best year since 1959 when it took first place in LeMans.

"This is a development for us given that we had such a tight schedule," Ludgate explains. "We're looking to do our absolute best, but next year is when we'll be fully competitive."
0 comments
Hide comments
Related