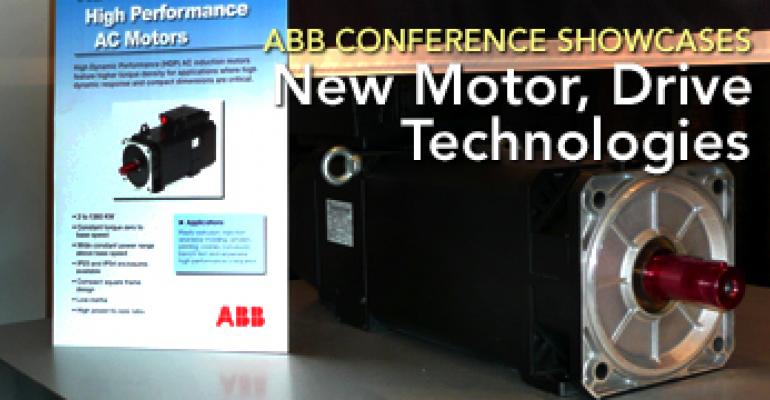 The exhibit hall at the ABB Automation & Power World was buzzing this week as attendees checked out some of the latest technology offerings. Here's a rundown of two new product introductions at the show:

A major source of energy loss in a motor is due to the iron loss associated with the stator winding. ABB's Fabrizio Galbiati says engineers have addressed this problem in a new line of high performance, low voltage AC motors with a low-loss lamination technology to achieve 95-96 percent efficiency. More significantly, the HDP series motors, which come in a range of sizes and power ratings from 2 to 270 kW, achieve comparable performance to similar motors but with a smaller footprint. The result of a five-year development effort, Galbiati says the design calls for 50 percent less material and employs a cast aluminum rotor to achieve low inertia, features that ABB is betting offset the 20 percent higher price tag than conventional motors. Capable of operating at constant torque, the motor line is targeted at applications such as extrusion machines and coil winders, which require high torque at low speeds. ABB has also introduced a compatible drive for the motor.

Harmonics are a headache in motor operations, which can lead to useful power wasted in the form of heat. While harmonics are typically managed at the DC to motor point, ABB has come up with an alternative way of thinking about the problem. "We basically found a way to take clean, sinusoidal power and do something to it," says ABB's Peter Walker. Their solution is the Ultra Low Harmonic Drive, which takes the same technology used to convert DC to the motor and uses it on DC to utility power. "So instead of managing the harmonics that are introduced in the process of converting AC to DC, we don't generate them in the first place," he says.