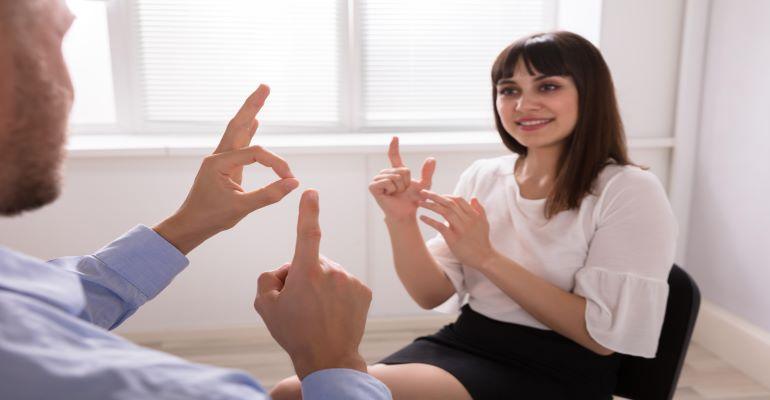 Omnibridge, an Intel venture, is using AI to develop a SaaS application that would translate American Sign Language, the language used by the deaf and hard-of-hearing, to spoken American English.
An Intel venture is developing a SaaS application that would translate sign language to English to help the deaf and hard-of-hearing communicate more easily.

Artificial intelligence (AI) is finding its way into many industrial, retail, and medical applications. But the technology is also being mined for a purpose that can be considered even more basicꟷhelping the deaf and hard-of-hearing communicate with the hearing world.

Omnibridge, an Intel incubator venture started in 2021, is developing a SaaS (Software-as-a-Service) application that would translate American Sign Language, the standard form of communication used by the deaf, to spoken English, and vice versa, using AI algorithms. The application would work in real time and provide bi-directional translation, enabling both the deaf/hard-of-hearing and hearing person to freely communicate.

The venture is headed by Adam Munder, a deaf engineer who has worked at Intel since 2011, primarily as a lithography engineer. Munder, who communicates through sign language and two translators, discussed Omnibridge and its omission during the recent Intel Vison event in Austin, Texas.

Omnibridge’s mission is a passion for Munder, fueled by his experience trying to function as a deaf person in a hearing world. “I have the same background and degrees as a hearing person,” Munder said through a sign language interpreter. Munder has Bachelor of Science and Master of Science engineering degrees, his undergraduate one from Rochester Institute of Technology, which has a large number of deaf and hard-of-hearing students. His extensive engineering background includes work in applied robotics, mechanical engineering, nanoscale engineering, and more recently, computer science and machine learning.

At Intel, Munder considers himself lucky to have two interpreters. But outside of Intel, Munder admits communicating is not easy, particularly because the number of people who communicate through sign language is minuscule. He recounted a story of checking into a hotel with his family, who are also deaf, and having to engage in a protracted conversation through a series of written notes with the hotel check-in staff. He added this type of communication is often repeated in many locationsꟷthe post office, retail stores, restaurantsꟷthat the non-hearing-impaired normally navigate with ease.

The SaaS application Omnibridge is developing would capture sign language and, using AI-based algorithms, convert them to spoken English. Munder explained that at a hotel, for instance, the deaf or hard-of-hearing person would sign into a tablet device equipped with the application. The translated data from that device would then appear on the hotel’s hardware in English.

Munder added that the AI algorithms now being developed would be able to sense the deaf person’s mood and tone, as well as translate subtleties such as language nuances and body language.

Omnibridge could have the SaaS application available as early as next year, according to Munder. He emphasized that the software would potentially have a sizable economic benefit for the economy. According to the National Association of the Deaf, the U.S. has 48 million people who are either deaf or hard-of-hearing, which is estimated to be a $9 billion consumer market for goods and services.

Munder expects that once the application is available, it will likely find use initially in services and establishments considered parts of everyday life, such as banks, post offices, and first responders. The technology would need further development for specialized services such as medical and legal, he noted.