So, What's Teslaphoresis? And How Can it Make Self-Assembling Circuits?

Scientists at Rice University have discovered a new phenomenon they've dubbed Teslaphoresis that could pave the way for self-assembling, wirelessly powered circuits.

Have you heard the term "Teslaphoresis?" You can forgive yourself if you haven't because a group of scientists at Rice University just invented the term to describe a new phenomenon that could have big implications for electronics assembly and nanotechnology. Paul Cherukuri, an adjunct assistant processor of chemistry at Rice, said the easiest way to think of Teslaphoresis is as "self-assembly at a distance [or] ... long-distance assembly of materials." 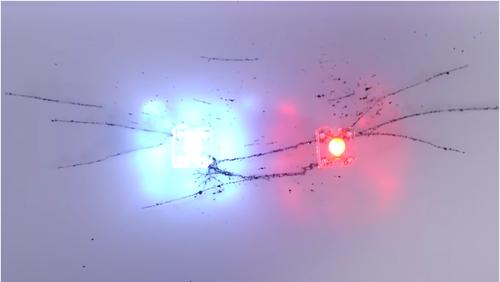 When hit by a field emitted by a Telsa coil, carbon nanotubes automatically arranged themselves into wires and also harvested enough energy to power LEDs.
(Source: Rice University).

While experimenting with Tesla coils, a team, led by Cherukuri, decided to see what would happen if they applied a long-range forcefield generated by a specially designed Tesla coil to some single-walled carbon nanotubes. What they found was that, once they were hit by the "Teslaphoretic field" (TEP), the positive and negative charges of the nanotubes began to oscillate and the tubes automatically arranged themselves into conductive, wire-like structures.

Furthermore, the newly formed wires also absorbed the energy from the Tesla coil, creating a form of wireless power. In one experiment, which Cherukuri and his team detailed, along with the rest of their findings, in the journal ACS Nano, the nanotubes would self-assemble themselves into circuits that could power LEDs. "... While Teslaphoresis has the distinct advantage of unrestricted directed self-assembly, we also found that the near-field energy of the Tesla coil wirelessly powers and self-assembles nanotube circuits and remotely self-assembles parallel arrays of individual nanotubes from the bottom-up," the study said.

Rice researchers have apparently been studying the idea of Teslaphoresis for several years, but it is only now coming to the forefront because of research like this, which Cherukuri and his team self-funded. While the research is in its earliest phases the scientists believe Teslaphoresis could have a wide spectrum of applications from biomedicine to electronics. According to the ACS Nano study, the nanotubes can assemble themselves at great distances depending on the level of power transmitted. The researchers also believe a system could be scaled up to include multiple Tesla coils to assemble more complex circuits. According to the study, they have also experimented with other materials including glass beads, polystyrene, carbon black, gold, graphite, wax, and silica beads, and have observed "directed, scalable assembly" in these, as well.

"The intriguing capability of the TEP force to assemble and parallelize individual semiconductors on a surface en masse without any chemical template or lithography could lead to its application for the scalable fabrication of high-density parallel nanotubes in computer processors or possibly bottom-up assembly of conductive nanotube fibers ...," the study said.

"We're talking about building circuits without actually touching them," Carter Kittrell, a research scientist at Rice commented in a video released by the university. What this boils down to is essentially creating self-assembly for electronics and possibility of creating circuits, chips, and processors that can build themselves, not unlike a biological organism. Cherukuri said his son likened the look of the phenomenon to being like when Spider-Man shoots webbing, and the description is pretty spot on. "The physics of that is actually a lot richer than what we had originally thought, so there is new science coming out of this as we go," Cherukuri said.

Watch Cherukuri and his team from Rice talk more about their breakthrough with Teslaphoresis: