HomeAlternative EnergySlideshow: Next-Gen Wave Glider Robot Propelled by Solar
Recent
Argo AI Expands to Austin and Miami in Search of More Challenges
May 18, 2022
12 Ideas that Could Change the World
May 18, 2022
Making the AC Power Main Intelligent
May 18, 2022
How to Make Sure Your Digital Transformation Doesn’t Fail
May 18, 2022
POLL
The Internet's Grooviest Slideshow of Legendary International Scouts
May 17, 2022
Electronics Industry Bolsters Root of Trust Security Efforts
May 17, 2022
3 Tips for Embedded Software Configuration Management
May 17, 2022
Novel 3D Printing Method Used to Replenish Coral Reefs
May 16, 2022

The SV3 autonomous, unmanned marine vehicle (UMV) is the big brother of the smaller SV2, which has been the company's main model since it was introduced in 2009. The robots can operate independently for a year or more at sea without requiring maintenance and can form data gathering networks in fleets. They are often used for monitoring marine ecosystems, predicting weather patterns, and gathering environmental data, as well as conducting reconnaissance and surveillance. The robots' unusual propulsion system mechanically converts the motion of ocean waves into forward movement, while their payloads are fueled by solar energy. The system recently won the 2013 Edison Awards Gold Medal for innovation in power generation and utilization.

Click on the image below to see the Wave Gliders in action. 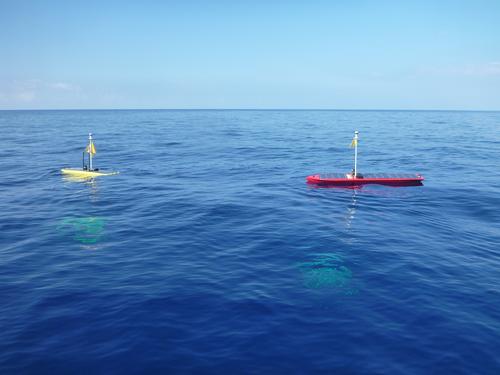 Now that propulsion system has been boosted with solar power. New in the SV3 is the ability to store solar energy, as well as an electrically powered auxiliary, vectored thruster. The new model's peak payload power is 10 times the SV2's at 400W vs. 40W, and its peak solar power is 170W vs. the SV2's 112W. The lithium-ion rechargeable battery is the same type as the older model's, but its 980Wh capacity is higher than the SV2's 665Wh.

The SV3's use of solar energy for at least some of its propulsion especially intrigues me because of a discussion in the comments section of my recent blog on alternative fuels. A reader wondered why solar power isn't used in propulsion.

I replied that the energy requirements for a stationary object are very different from the energy requirements for an object that must propel itself somewhere. Aside from generating enough power to overcome inertia, there's also the additional energy needed, such as in a car, for powering things like lights, heating, and electrical appliances via outlets. Propulsion itself takes a lot more energy than we moderns may realize, having gotten used to the combustion engine and the "horseless carriage," and solar energy density isn't high enough.

But it's getting higher for collectors used on stationary buildings: Tokelau, a three-island Pacific nation, recently went 100-percent renewable using solar as its primary source of electricity, with biofuel as a backup.

Liquid Robotics isn't telling us how it converts and stores solar energy, but I suspect the amount contributed to propulsion isn't huge. The surfboard-sized robots weigh as much as very large adult man: 122 kg (270 lb) for the SV3 and 90 kg (200 lb) for the SV2. At 290 cm x 67 cm (114 inch x 26 inch), the SV3's float is larger than the SV2's, which measures 210 cm x 60 cm (83 inch x 24 inch). The new model's float has three solar panels for powering the onboard electronics. Its power system and payload can be changed by swapping out modules in its compartments. According to a press release, the "modular" power system allows power generation from other sources, such as wave-to-electricity generators and fuel cells.

The float is connected to the submerged propulsion system by a high-bandwidth umbilical tether 4m (13 ft) long. The propulsion system can power and communicate with an underwater payload via an expansion port. The SV3 is about twice as fast as the older model. Both models are acoustically silent and have low visual and radar signatures.

Other Wave Glider models include the METOC (Meteorology and Oceanography); the SHARC (Sensor Hosting Autonomous Remote Craft), which is acoustically silent, with low visual and radar signatures, and designed for defense and national security applications; and the lower-cost GATEWAY for monitoring, control, telemetry, and data extraction of undersea equipment and instrument, such as weather data.